Blair Lekstrom, an advisor to HD Mining, said that he hoped unions would “accept” the use of temporary foreign workers in their proposed Murray River coal mine. That hope seems to be deflated, as Stephen Hunt, the Director of the B.C.
Jan 29, 2015 8:39 AM By: William Stodalka 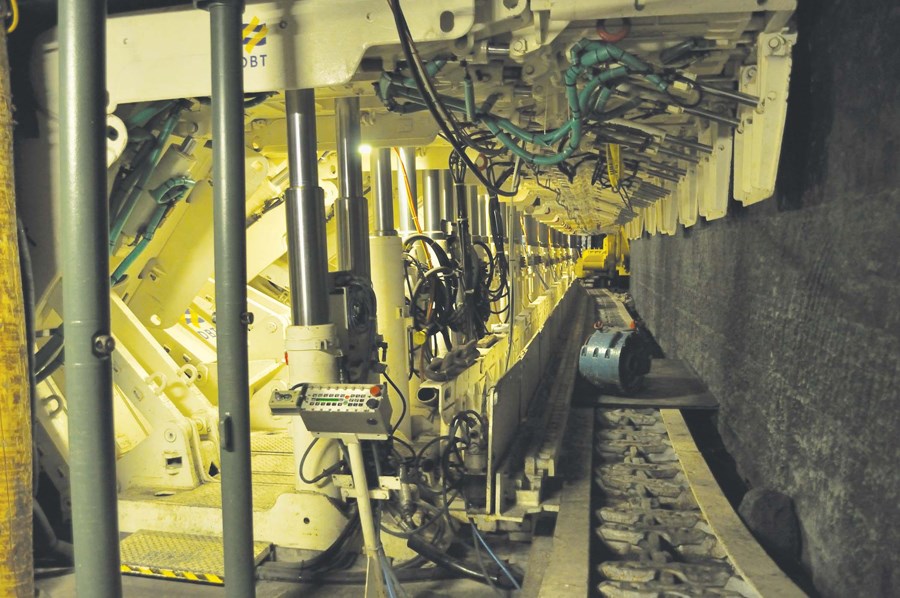 Longwall shearing technology, an example of which is seen here, could be used in the Murray River mining project. The proponent says Canadians are untrained with this technology.

Blair Lekstrom, an advisor to HD Mining, said that he hoped unions would “accept” the use of temporary foreign workers in their proposed Murray River coal mine.

That hope seems to be deflated, as Stephen Hunt, the Director of the B.C. division of the United Steelworkers, promised continued pressure on the company.

HD Mining wants to build a coal mine near Tumbler Ridge that, unless their plans are changed, would use temporary foreign workers in both the construction and in the first ten years of the mine operation.

The amount of temporary foreign workers would go from 60 per cent to zero from year one to year eleven, HD stated in chapter 3 of the environmental impact statement (EIS).

Before that can happen, the application for the environmantal assessment certifricate must go through an environmental approval process which includes a public comment period.

Jan. 29 is the final day the BC Environmental Assessment Office will accept comments.

The union director also promised that they would attempt to legally challenge any use of temporary foreign workers in the construction and operation of the mine.

Hunt was also worried that it could present an example for future coal mines, as he believed that the employers could pay their employees less.

“If they’re paying a fixed labour rate, and they look just down the road (at a company) mining the exact same commodity," Hunt said, "and they can mine it for significantly less (because of lower wages) do you think (they're) going to say, ‘We’re going to continue to pay more to work? I don’t think so.”

He believed that HD Mining would be more likely to pay their employees less than Canadian-born workers.

They would do this because the employers would “hold (the employees) passport” and send them home should any complaints arise.

“If you can mine that coal for considerably less using temporary foreign workers then every employer’s going to look to that.

“You should allow (workers at the mine) to immigrate to Canada,” Hunt added.

Lekstrom, however, says TFWs cost the company more than local workers, after all costs are considered.

This is not the first time that unions have attempted to challenge HD Mining on their use of temporary foreign workers.

In 2013, the Construction and Specialized Workers Union Local 1611 and the International Union of Operating Engineers Local 115 issued a court challenge against the company’s plan to use temporary foreign workers in the bulk sample phase project.

HD started gathering samples to determine if it would be worth their time to actually build a mine in 2012 and the process will conclude in the fourth quarter of this year.

At the time of the court challenge, the judge noted that “It appears that this is the first time a positive decision made under the (Temporary Foreign Worker Program) has ever been challenged.”

But Judge Russel Zinn noted at when HD Mining did its recruiting, “there was a labour shortage in the mining industry.”

However, this situation may have changed in Tumbler Ridge. Since then, two prominent mines are no longer operating. Tumbler Ridge’s Deputy Mayor, Rob McKay, estimated earlier this year that the town’s unemployment rate was as high as 60 to 70 per cent.

Hunt believed that this new situation — as well as recent changes to temporary foreign worker laws — would play a role in the company’s ability to use TFWs.

In HD Mining’s fact sheet about the project, it states “there is a lack of skilled underground coal mining workers in Canada. In addition to shortages of skilled worker, HD Mining will be utilizing a mechanized long-wall mining construction method that is not currently used in Canada and is different from conventional tunneling.”

However, Hunt believes that workers could easily be retrained, which he said was simply a matter of using different equipment.

The executive director of the Kentucky Coal Academy, Gary Whisman, was quoted as saying that Canadian workers could do the job with six-months training and supervision by foreign consultants.