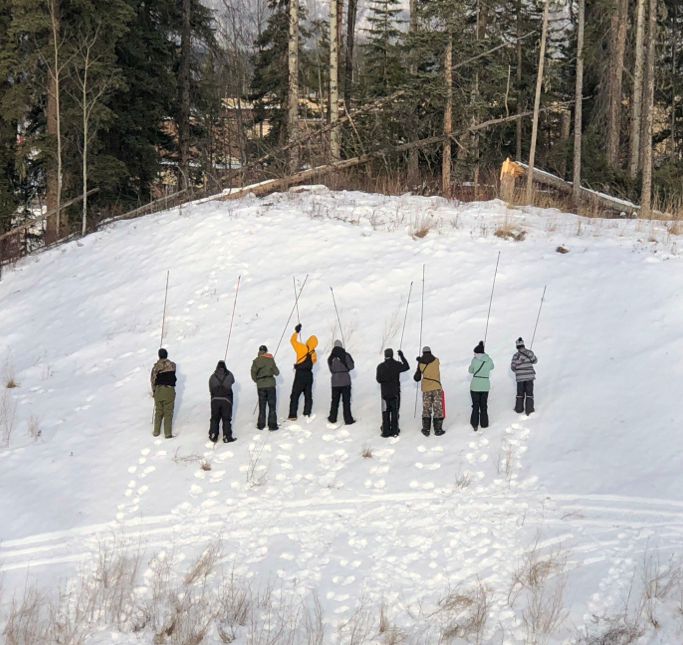 Grade 9 student Charlie Wiman says the training was invaluable. “It was a great experience and it was a good thing to go into in case you get yourself into a situation where you need it,” said Wiman.

“They were really eager, it’s nice to give the local youth backcountry knowledge that they’ll be using in the future,” said Kruse.

A series of transceivers were buried in the snow for students to find, acting as mock rescue beacons.

“It was a great experience and it was a good thing to go into in case you get yourself into a situation where you need it,” said Wiman.

Gulick says the students were keen to learn.

“The kids really liked it and were quite interested, they did quite well at it,” said Gulick.

The company has been working the District of Tumbler Ridge for over six years, collecting snowpack data for the area, noted Ryan Shelly, who owns and operates Summit Avalanche Consulting.

“Avalanches do happen there, so it’s one way of trying to keep the town safe and the kids safe,” Shelly said. “There was tons of up-take from the community, it ended up being all hands on board. We’ve gotten a lot of positive feedback from parents.”

Local businesses chipped in to cover the costs of the course along with the school’s PAC, while Tumbler Ridge Search and Rescue provided avalanche gear for the students.

“Students who participated thought the course was very beneficial to them as many of them sled in the mountains with their family and friends,” wrote Deeley.