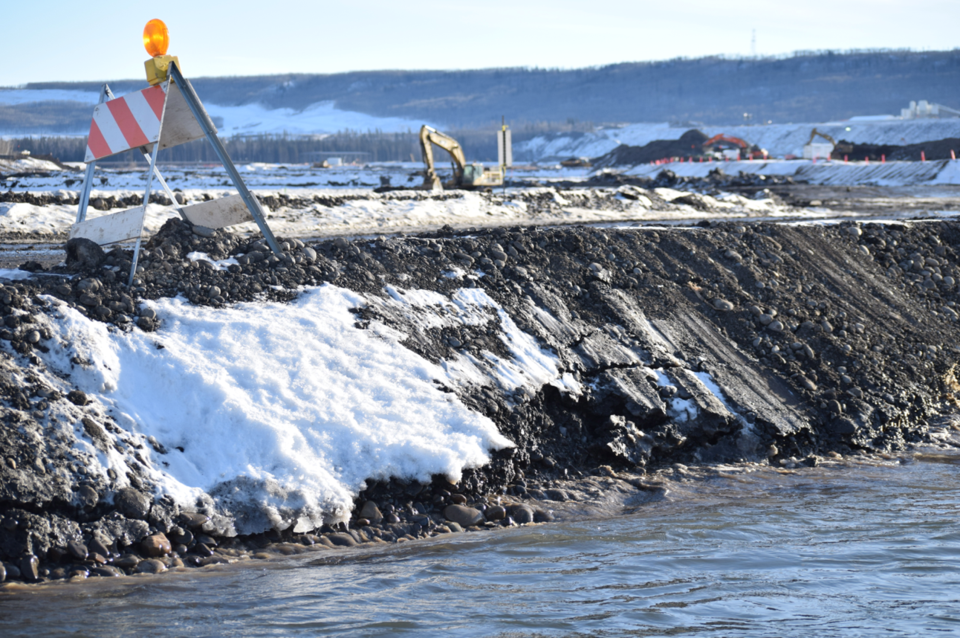 The Site C worksite in January. BC Hydro has been issued an order to overhaul its sediment management plans by the provincial Environmental Assessment Office.

BC Hydro is overhauling how it controls sediment flows into the Peace River after regulators issued  an environmental order to the Site C dam.

BC Hydro says it is working to control the erosion issue, which has been compounded by what they say is one of the warmest and wettest winters in decades.

According to the order, issued by Senior Compliance and Enforcement Officer Chris Parks, Site C's sediment and erosion issues date back to April 2016, when the dam was warned for breaching two conditions of its environmental assessment certificate related to runoff.

Erosion and elevated sediment levels can harm fish populations, according to the EAO order.

The issue arose again in August, when an inspector found a contractor on the $8.8 billion dam project had pumped sediment-heavy water from a flooded work area into fish habitat. On Feb. 28, an independent environmental monitor reported a contractor had again pumped sediment-laden water into a fish-bearing stream. The order says Site C is in "continued non-compliance" with two conditions of its environmental approval.

In a statement, Site C spokesperson David Conway said BC Hydro was working with its contractors to meet the conditions of the order.

"We have an erosion and sediment control plan in place; however, we experienced some excess water challenges last month after heavy rainfall and the warmest winter weather for the region in 30 years," he wrote, adding Hydro has also hired a new water management contractor.

Site C is also bringing in an "expanded and more intense erosion and sediment control program" that will include reporting, mapping and weekly updates, Conway said in an email. Contractors have carried out more than 1,000 erosion and sediment inspections since October.

The order was issued just days after BC Hydro reported a 400-metre "tension" crack had formed along a haul road on the north bank of the river. On Friday, BC Hydro said contractors continued to monitor the crack, which appeared to have stabilized.

Site C is an 1,100-megawatt earthfill dam proposed on the Peace River. It will flood around 83 kilometres of river valley including farmland and First Nations cultural sites.