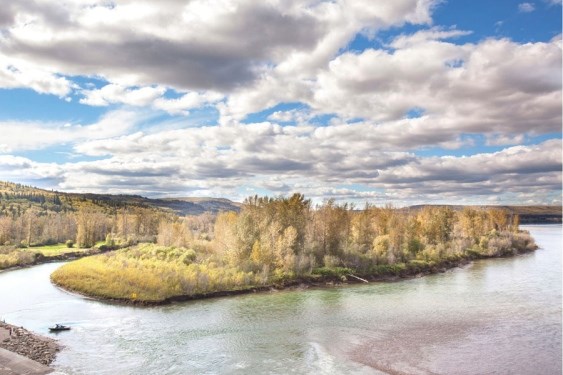 Adrian Dix says Manitoba is ahead B.C. on the Alberta power sales question.

Manitoba is poised to beat B.C. in the race to expand hydroelectric power sales to Alberta, the BC NDP's Adrian Dix says.

Dix, the party's BC Hydro critic, claims that Alberta's hydro-rich neighbour to the east is ahead of B.C. when it comes to weaning the oil-producing province off coal power.

The issue of expanded interprovincial power sales was thrust into the spotlight this week with Premier Rachel Notley's suggestion that Alberta could sign new long-term power agreements with B.C. in exchange for support for heavy oil pipelines, including Northern Gateway.

The B.C. government is keen on a new intertie with Alberta. Earlier this month, Premier Christy Clark told Alaska Highway News that the Site C dam could produce enough power to "potentially electrify the oilsands" while keeping rates low for British Columbians. Clark has since said that even with power sales on the table, B.C. will continue to hold to its "five conditions" on heavy oil pipelines.

The Alberta NDP government has moved to reduce the province's dependence on coal, in part to cut emissions, but also to buck the perception that Alberta's oil is "dirty" because coal is used to power extraction and refining. Powering those activites with hydroelectricity would make "the oilsands the cleanest oil produced anywhere on the globe," Clark argued.

"If Canada wants to make an argument for our resources to find their way to market, let's make them the cleanest in the world and let's make that our brand," she said.

But it could be Manitoba's rivers—not the Peace—that make that a reality, Dix says.

He points to a memorandum of understanding between the two provinces, signed in January, that commits to "further cooperation on the shared goals of greenhouse gas emissions reductions, energy efficiency, and renewable energy development including hydroelectricity."

"That doesn't mean there are sales," Dix said, noting B.C. has no such agreement in place. "(But) they're working towards that possibility and they've discussed it and they have a timeframe."

He referred to BC Hydro CEO Jessica McDonald's Feb. 25 comment in the Globe and Mail that "there really hasn't been any work done, to be blunt, in terms of the cost or logistics of an expanded intertie with Alberta."

"In B.C. …the premier says it's a top priority for the province, (but) the president of BC Hydro says basically no work has been done on it," he said.

In a follow up statement, McDonald said she was responding to a question from the Globe about why she wouldn't place a cost estimate on building a new intertie between the two provinces.

"I was stating that no work has been done yet on the detailed design and engineering studies that would be required to determine cost, as we are still looking at all options, including restoring the full capacity of the existing intertie with Alberta," McDonald said.

What the tentative agreement between Alberta and Manitoba will mean remains unclear. B.C. already sells power east, but would need new transmission lines and long-term agreements to expand sales. Whether Manitoba could potentially take a bite out of Alberta's demand remains to be seen.

Power lines between Northeast B.C. and Fort McMurray would be more direct than similar lines across the prairies, and a report from the Alberta Electric System Operator suggests a B.C. intertie could be less than half the cost of similar infrastructure from Manitoba.

In an interview with the Alaska Highway News Friday, McDonald said talks between B.C. and Alberta are ongoing.

"We already do sell power to Alberta. That's not new," she said. "But the idea is, as Alberta transitions off coal and to cleaner resources, there is an opportunity that both jurisdictions recognize has real potential. There are discussions underway between Alberta and B.C., and those are at the government level."

Dix said the latest talk of an intertie is proof B.C. needs an outlet for what many expect will be a large energy surplus when Site C comes online.

"The premier is…running around trying to find someone, anyone, to take the huge surplus of energy that will come online with Site C," he said. "But they haven't done the work."