Municipality kept in the dark about impact of transfers on land base
Apr 19, 2016 12:56 PM By: Jonny Wakefield 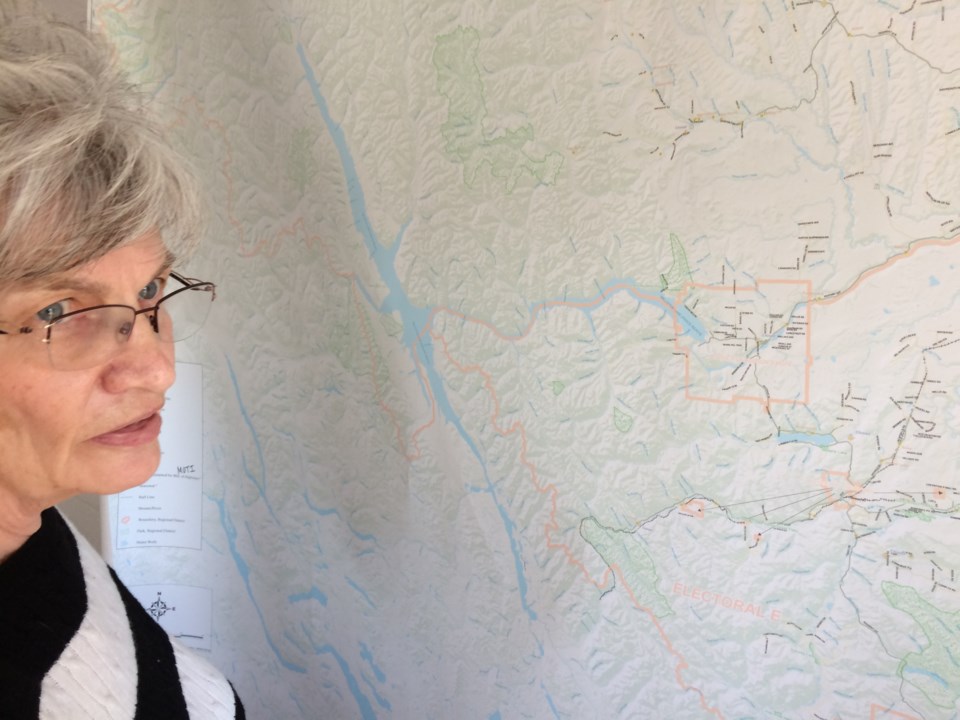 Hudson's Hope Mayor Gwen Johannson says the district has little information on lands within municipal boundaries that could be deeded to First Nations impacted by Site C.Jonny Wakefield

The District of Hudson’s Hope stands to lose a large chunk of municipal land in transfers to First Nations impacted by the Site C dam, Mayor Gwen Johannson says.

If approved by the provincial government, the district of 1,000 could see sections of public land south of the Peace River carved off for First Nations as part of an impact benefits agreement on the $8.8 billion hydroelectric project.

Johansson said the district, which covers 358 square kilometres and is bisected by the Peace River, has few details on what lands will be affected.

“As far as I can tell, it’s everything south of the river,” she said. “I can’t get clarification on exactly what this means. My understanding at the moment is the private land that is there would not be affected by this…but everything that’s Crown land (would be).”

Details on how First Nations will be compensated for Site C are still under negotiation, and few local leaders are clear on how transfers of Crown land will impact municipalities.

“People want more information on what it means, particularly the people who use it for recreation—the hunters, the snowmobilers, the fishers."

Hudson’s Hope first learned of the transfers last June, but Johansson could not speak publicly on the issue until this year.

On Thursday, the Peace River Regional District (PRRD) endorsed a motion asking the province for details on impact benefits agreements with First Nations, including a list of Crown lands that could be transferred and their impacts on the regional tax base.

The board will also ask whether the costs of impact benefits agreements are included in the dam’s overall price tag.

The issue first came to light after hunters noticed tracts of land in the Muskwa-Kechika wilderness area had been set aside under sections 16 and 17 of the provincial land act, which allow the forests minister to hold lands “for any purpose the minister considers advisable in the public interest.”

Similar issues have arisen in the Peace Moberly Tract, a hunting area within the boundaries of the District of Hudson’s Hope.

Last summer, Saulteau First Nations and the B.C. government approved a Site C benefits agreement, which includes Crown land transfers and protection of the Peace Boudreau, a land area “of importance” to the nations.

Suntanu Dalal, spokesperson for the Ministry of Energy and Mines, would not comment specifically on the transfers’ impact on Hudson’s Hope, saying only “there is a possibility of Crown land transfers to Treaty 8 First Nations affected by the project (Site C).”

“These land offers remain the subject of negotiation with affected First Nations . . . no lands would transfer without a full assessment and after undertaking all necessary consultation,” he wrote in an email.

Johannson said the district is trying to get more information on how the transfers will impact residents, including recreational users and trappers. She added the district recently rezoned several large industrial parcels on the south side of the river intended for oilfield pipeline yards.

“People want more information on what it means, particularly the people who use it for recreation—the hunters, the snowmobilers, the fishers,” she said.

It remains to be seen when Hudson’s Hope will have firm answers on Site C’s impact on its land base.

Energy Minister Bill Bennett told the Alaska Highway News last month that there are “legitimate criticisms” of the way the B.C. government has handled land transfers to First Nations impacted by Site C, but said negotiations with First Nations must continue to be confidential.

“There are people who don’t like that, and I get that and respect everybody’s point of view, but the fact of the matter is it’s a government-to-government negotiation,” he said.

The dam will flood 83-kilometres of the Peace River valley, including sites sacred to local First Nations.

—with files from Bronwyn Scott