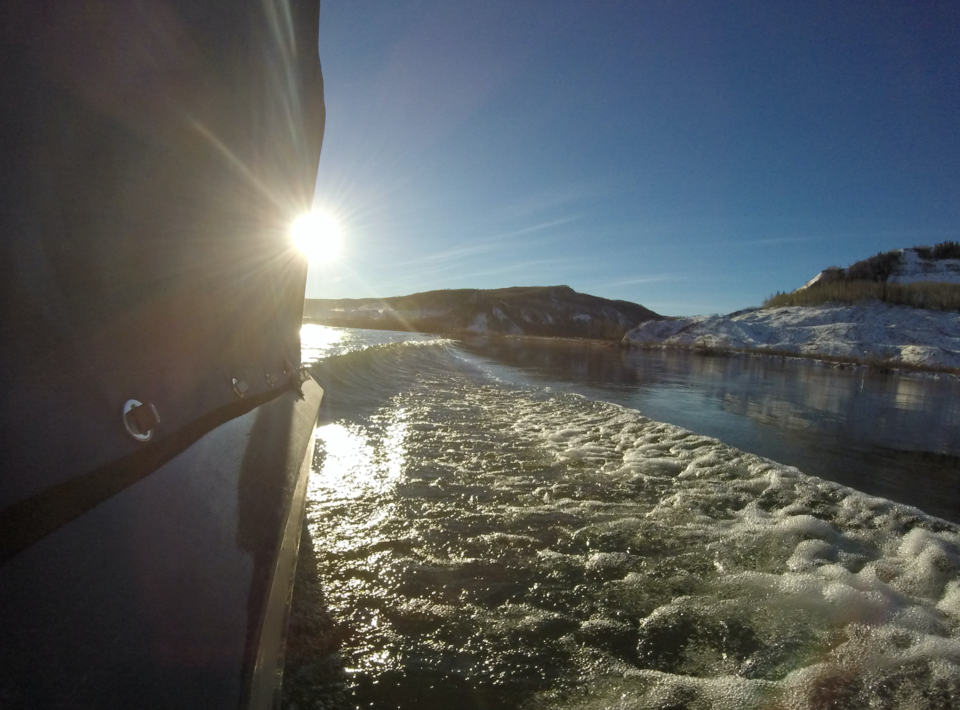 The Peace River upstream from Site C this January. The Federal Court of Appeal dismissed a First Nations legal challenge against the dam Jan. 23.Jonny Wakefield

In a decision released Jan. 23, the court dismissed an appeal of Site C’s environmental assessment, brought by the West Moberly and Prophet River First Nations. The case was heard in Montreal in September.

The nations say the $8.8 billion project and its 83-kilometre reservoir will infringe on their Treaty 8 rights to hunt, fish and trap on the land.

The appeal focused on whether the federal government under Prime Minister Stephen Harper was justified in approving Site C in a closed cabinet meeting, a procedure known as Governor in Council (GIC).

“Specifically, the Court must determine whether the GIC, in circumstances where the designated project has significant adverse environmental effects and adverse effect on lands covered by a treaty, is required to determine if such effects constitute an infringement to the treaty rights,” Justice Richard Boivin wrote in the decision.

If treaty rights were infringed, the court must determine “whether such effects are justified” by a legal test set out in the Sparrow case, a precedent-setting ruling on Aboriginal rights.

The three-judge panel ruled a judicial review “is not the proper forum to determine whether the (First Nations’) rights are unjustifiably infringed,” and dismissed the case with costs.

The ruling is a blow to opponents of Site C, who say the mega-project should be put on hold until the courts complete their rulings.

While there is at least one legal challenge remaining, one Site C opponent says the May 2017 provincial election is now their best shot at stopping the project.

Interviewed last summer, Willson said his nation was challenging what it saw as a “failure on (the government’s) part” to uphold Treaty rights.

"When they're making a decision of this magnitude—it's the largest project in B.C. history, and there are already two existing dams that have previously infringed (on) the treaty—they should have had no other choice than to have (a justification for treaty infringement)," he said.

Five judicial reviews of Site C’s environmental approvals have been dismissed, according to a Dec. 2016 BC Hydro news release.

Those challenges include two legal actions from the Peace Valley Landowner Association in B.C. Supreme and Federal Court, as well as a pair of challenges against the project’s federal and provincial environmental approvals from the West Moberly and Prophet River First Nations.

Ken Boon, a Peace Valley farmer and outspoken critic of the dam, called Monday’s ruling “shocking,” but added he hadn’t had a chance to read the court’s decision.

“We obviously had high hopes on the continuing First Nations legal battle against Site C, and this would obviously be a big blow,” said Boon.

Boon and his wife Arlene were recently expropriated from their land at Bear Flat to make way for a Site C-related highway realignment, but continue to live on the land as BC Hydro’s tenant.

He knew of at least one outstanding legal challenge, but said the May 2017 provincial election was the best shot at stopping the project.

“The NDP has stated their turf pretty clearly on that one,” he said. “Obviously we have high hopes they form the next government.”

“Irregardless of court decisions, the people of this province deserve an independent and full review of the most expensive public infrastructure project in B.C. history,” Boon wrote in a follow up statement. “The election can get us there.”

—this is a developing story that will be updated as information becomes available.