Premier John Horgan said Thursday his government is waiting for a second and third opinion on the challenges facing completion of the Site C dam, but said cancelling construction of the multi-billion project would not be unprecedented.
Jan 14, 2021 11:02 AM By: Alaska Highway News Staff 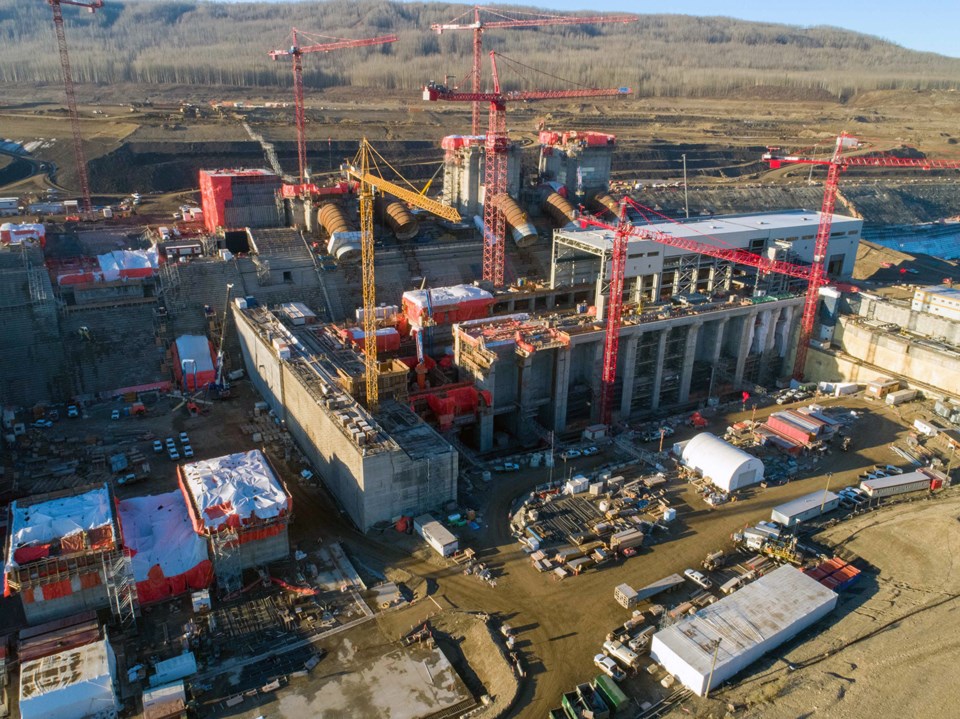 Up to nine cranes are being used to build the Site C powerhouse and install the six penstocks, October 2020.BC Hydro

Premier John Horgan said Thursday his government is waiting for a second and third opinion on the challenges facing completion of the Site C dam, but said cancelling construction of the multi-billion project would not be unprecedented.

Responding to questions from Vancouver Sun columnist Vaughn Palmer, Horgan said government is now waiting on two safety reports from international experts after it received a review from its special advisor, Peter Milburn.

“There’s a lot of work to do yet,” Horgan said. “Mr Milburn did not have capacity to address the safety challenges that could emerge as a result of the geotechnical issues that have certainly come to the attention of Hydro and to the public since we formed government in 2017.”

Milburn, a former deputy minister of finance, was appointed last summer after BC Hydro expressed serious concerns with the project’s schedule, budget, and geotechnical challenges on the Peace River that has affected stability below the powerhouse, spillway and future dam core areas.

“Milburn worked with the info that was available to him, the fix that’s been proposed by Hydro. We’re now asking for two other opinions on the efficacy of that fix,” said Horgan.

“This isn’t to say that Milburn’s report isn’t comprehensive. But it is also appropriate that we make sure that the fix that is being proposed to the geotechnical challenge is going to be safe.”

The two experts are John France from the U.S. and Kaare Hoeg from Norway, according to the Vancouver Sun. Horgan said the reports will be made public after cabinet has “opportunity to digest them."

“There’s a couple of decision points ahead for us within cabinet. Before we release information to the public we want to make sure we have all of the details. We do not want to have half measures at a critical point in a large industrial project that is well advanced,” Horgan said.

“But to stop preparing to complete is not the direction that’s been given. So it’s appropriate I think that those that are working on the facility continue to do that until such time as we don’t.”

Construction on Site C began in summer 2015 under the BC Liberals, and was originally projected to cost around $9 billion; some observers however now tab it to be as high as $12 billion, if not higher.

About $6 billion has already been spent so far, with 4,941 employed on the project in November. There were just under 900 workers on site as of Thursday.

The first two turbine runners for the dam arrived in Prince Rupert in December from Brazil.

One is currently being transported through the Pine Pass on Highway 97 from Prince George, and to the dam site through Chetwynd. At last report, the 170-tonne piece of machinery was in Bear Lake, and expected to arrive in Chetwynd Friday morning. The second runner will be shipped here in February.

With the turbines on the move, Horgan was asked whether that's a sign the project is unlikely to be cancelled.

Horgan made reference to the Kemano Completion Project, a proposed $1.3-billion hydroelectric expansion project in northwest B.C. cancelled in 1995 by the NDP government under premier Mike Harcourt.

“They also had turbines that were on their way and that project was stopped, so it’s not unprecedented,” Horgan said.

[Eds. note: Article updates to include the names of the two new experts hired to review Site C.]