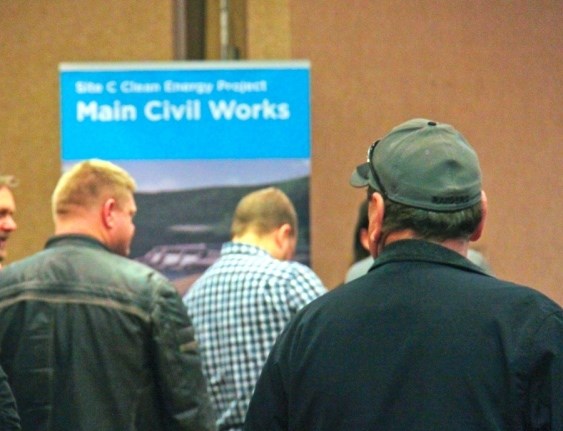 Prospective Site C workers at a business networking session in Dawson Creek earlier this year. A recent FOI found that 35 per cent of the Site C workforce is from outside B.C.

Only 65 per cent of the 482 people working on the Site C dam in November were from B.C.—below the 75 to 80 per cent previously claimed by BC Hydro and government officials.

That's according to documents obtained through freedom of information (FOI) by BC Building Trades, a labour group that's keeping a close eye on the $8.8 billion project.

Tom Sigurdson, BC Building Trades executive director, said the documents show B.C. workers "are not being given the priority they deserve on this project."

"We have literally thousands of B.C. workers who are unemployed," Sigurdson told Alaska Highway News. "This is a BC Hydro taxpayer-funded project that should have, as a priority, employment for British Columbians."

Three years ago, the Building Trades sought a project labour agreement with BC Hydro to build Site C—an agreement that was eventually abandoned in favour of the current "open site" model.

"We think BC Hydro should have gone with a project labour agreement to guarantee that there be a B.C. workforce on the project," Sigurdson. "So we started to ask the question: what is the B.C. workforce?"

When asked that question in January, BC Hydro President and CEO Jessica McDonald told Alaska Highway News that in December, 75 to 80 per cent of Site C workers were from B.C. In December, Energy Minister Bill Bennett told the Vancouver Sun that B.C. residents made up 75 per cent of the Site C workforce.

Sigurdson said the internal document shows those numbers are "a little exaggerated," raising questions about where project officials are getting their workforce numbers.

"I would say that they (Bennett and McDonald) tried to put the best face on the numbers," he said. "But the details that came back (with the FOI) showed that was not true."

While the B.C. government initially worried about having enough skilled workers to build Site C, the downturn in the oilpatch has freed up a sizable workforce—including many in nearby Alberta. Alberta-based firms including Petrowest and Morgan Constuction have both won major contracts on the dam. That's led to concerns from some in the B.C. Peace Region, where the unemployment rate is 9.2 per cent and Site C job fairs attracted nearly 5,000.

BC Hydro did not dispute the 65 per cent figure, but said it was only a "snapshot" of the labour force on an eight year-long project.

"The percentage of B.C. workers referenced by the Building Trades is a snapshot of one month—the number fluctuates from month to month," BC Hydro communications manager Craig Fitzsimmons said in an email. "It's been as high as 82 per cent last August, and has averaged about 70 per cent over the first six months of construction."

"The workforce composition at any givern time is only a snapshot, and the numbers of British Columbians working on the project will fluctuate. However, we fully expect that Site C contractors will hire workers locally and regionally first, then nationally."

Sigurdson said a project labour agreement would have guaranteed a higher percentage of B.C. workers on Site C. Under those agreements, non-union contractors would pay union dues for the duration of the project—guaranteeing access to their own employees and BC Building Trades members.

"You're assured they're getting the skills that are required," he said. "You wouldn't have to have the job fairs going out to do the search. And it would be British Columbia-based (labour)."

—this is a developing story that will be updated as information becomes available.

BC Building Trades FOI: 35 per cent of Site C workers out of province