Staff at the Twin Sisters Native Plants Nursery at Moberly Lake were joined by members of the Saulteau and West Moberly Council and local and industry representatives for the grand opening of their second greenhouse.
Jun 30, 2017 8:06 AM By: Trent Ernst 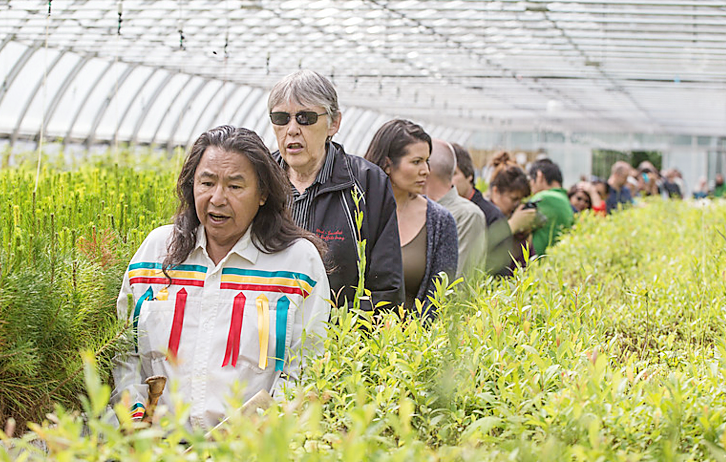 George Desjarlais sings a prayer of blessing as he leads a group through the greenhouse.Trent Ernst

Staff at the Twin Sisters Native Plants Nursery at Moberly Lake were joined by members of the Saulteau and West Moberly Council and local and industry representatives for the grand opening of their second greenhouse.

Board Member Rick Publicover presided over the ceremonies, which featured prayers by George Desjarlais from West Moberly and dancing by members of the Saulteau First Nations Traditional Dance Group, a group of children between the ages of two and 12.

Since the mid 1980s, says West Moberly Councillor Dean Dokkie, the idea was to have a nursery. An early attempt failed, he said, as there was little buy-in from industry, but in 2011, Glenn Zelinski, who sits on the board of directors, approched the two nations to discuss he development of a nursery to grow plants native to the areas where industrial development was occurring – forestry, hydroelectric developments, mining, oil and gas, pipelines, wind energy, and others. Zelinski was working at Western Coal at the time. It was bought out by Walter Energy, but Zelinski kept working on the initiative to secure a location for the nursery and further the initiative

A working group was set-up to figure out a site to put the nursery, to construct it, and create a training program.

Publicover says both Saulteau and West Moberly Contractors were involved in parts of the construction of the nursery, with West Moberly donated equipment time in levelling the site and Saulteau providing the former buildings from the Muskoti Learning Centre which now provides our office, training room, seed cleaning and storage and residence for the head grower. “Walter Energy funded trips for two Nations Working Group to tour a native plant nursery in the Cranbrook area to observe and learn about the native plants nursery business which is a unique business and there are few within the province and across the country,” he says.

Saulteau and West Moberly worked in partnership with Royal Roads College and Keefer Ecological Services through funding provided by the BC Agriculture Foundation to develop a training course, specializing in the growing of native plants. “As Vanessa Adams, our head grower will tell you, It’s not that easy to grow these plants!”

Twin Sisters Native Plants Nursery was incorporated in April 2013 and the partnership between Saulteau and West Moberly became effective on July 24, 2013

The greenhouse worked closely with Walter Energy, Peace River Coal and Teck. “We initially had three customers and have grown our customer base to approximately 25,” says Publicover

After these remarks, Desjarlais sang a song of blessing while the ribbon was cut, then led the assembled crowd through the greenhouse, still singing.