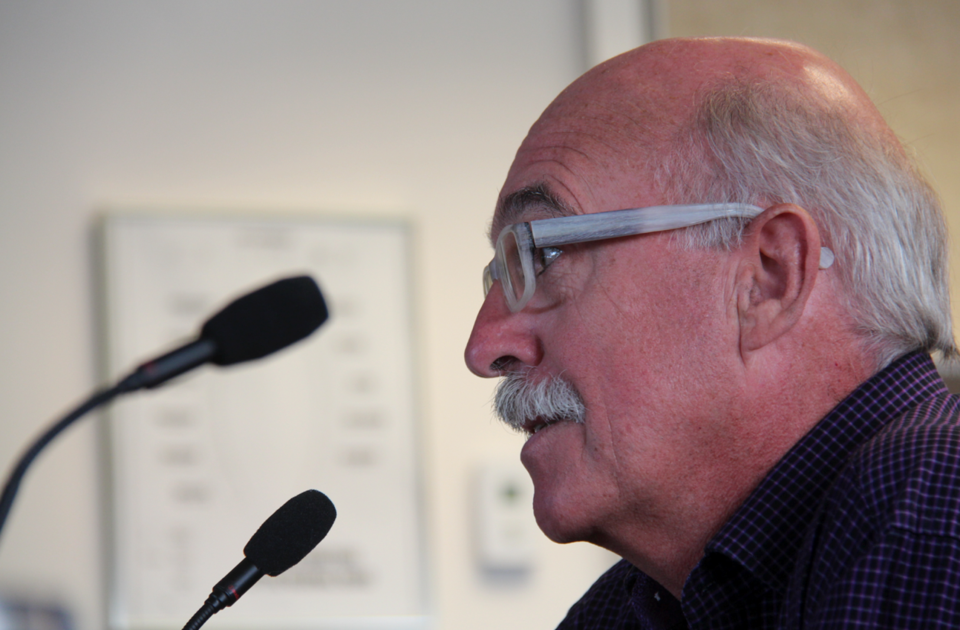 Dr. Gilles Wendling says there are major gaps in water quality monitoring in the Peace Region, raising new questions about the impacts of hydraulic fracturing on groundwater.Jonny Wakefield

The provincial government must address “profound” gaps in knowledge about groundwater quality in Northeast B.C., a regional district-commissioned study has found.

Hydrogeologist Gilles Wendling delivered the results of a two-year survey of water quality in Northeast B.C. at a Peace River Regional District meeting Aug. 25. It is the first comprehensive study of groundwater to be carried out in the Peace, the hub of B.C.’s oil and gas industry, and it raises new questions about whether water quality is adequately monitored and protected in the region.

“Before, we were quite ignorant,” Wendling said. “We didn’t have this information together. It was extremely awkward to access.”

The study relied on 875 groundwater samples collected from 522 locations between 1943 and 2015, as well as 11,935 surface water samples taken between 1955 and 2014. While the data was publicly available, including through the Northern Health authority, it had never been compiled or standardized.

The study identified “profound” gaps in knowledge about “the presence and migration of fluids” in the earth’s intermediate subsurface—the roughly 1,500 metres between potable groundwater and producing gas wells.

Wendling identified increased sodium and sulfate concentrations in groundwater in certain water wells. Barium concentrations also increased in several locations “over a relatively short time period,” the study found. “Such an increase is not expected under natural conditions” and “could possibly result from the intense drilling activity in the region.”

However, Wendling said it is too early to conclude what caused the declines in water quality. He also noted the data is incomplete for many water wells, making it difficult to compare over time.

The B.C. Oil and Gas Commission claims there has “never been an instance of groundwater contamination due to hydraulic fracturing” in the province. Most natural gas wells are drilled between 2,000 and 3,200 metres below the surface, compared to 150 metres for the average domestic water well.

However, the study suggests that there is still much that is unknown about the impacts of industrial activity on groundwater, including the “presence and migration of fluids in the intermediate zone of the subsurface.”

“Adequate characterization and monitoring programs need to be designed and implemented very rapidly,” the report concludes.

The PRRD launched the study in 2014 with support from the Treaty 8 Tribal Association and the Real Estate Foundation of B.C.

“There was a feeling amongst some people living in the area that there were risks to water,” said Gwen Johansson, mayor of Hudson’s Hope. “We can’t get a baseline because we can’t go back in time, but we can at least try to establish what (water quality) is now.”

She added “there was no action coming from the province” on additional water quality monitoring.

The province currently has seven groundwater monitoring wells in the Peace Region, which Wendling said is insufficient. The Netherlands, considered the most-advanced country in terms of water quality monitoring, has “thousands” of monitoring wells, he said.

The regional board has since passed a resolution asking the province to improve water quality monitoring in the region.

In a statement, Oil and Gas Commission spokesperson Graham Currie said the commission supports the draft report's reccomendation to enhance water quality monitoring in the region, but "would need to review the final reports before it could comment further on the technical aspects of the presentation."

"In principle, the Commission supports water quality monitoring and baseline studies in northeast B.C., including more and ongoing academic research," Currie wrote in an email.