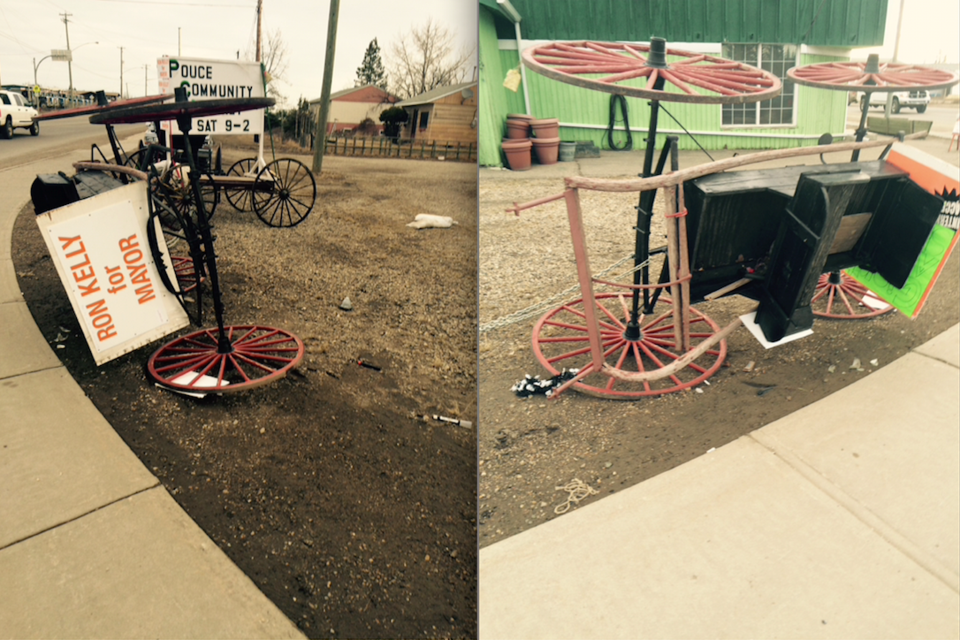 Campaign signs for candidates bidding to become Mayor of Pouce Coupe in a by-election this weekend, have made easy targets for vandals.Submitted

Two candidates in the race to become the next mayor of Pouce Coupe say their campaign signs have been vandalized.

Ahead of the April 9 byelection, one candidate is picking up the pieces of a unique campaign sign that he says was targeted by vandals over the weekend, while another says her signs have been targeted by paintballers.

Ron Kelly had placed three vintage buggies outside his antiques business along Highway 2 in Pouce Coupe, strapped with signs advetising his run for mayor.

Saturday morning, one of the buggies was found on its side, while several smaller signs were missing.

“When I showed up there at 7 a.m., one buggy was flipped over (and) several of my signs were stolen,” Kelly said. “I think they were going to (flip) the other two buggies but they got caught by somebody coming around the corner.”

He called the Dawson Creek RCMP, who as of yet have no leads.

Police say there were no witnesses and no video surveillance of the area was available.

“As a result, there are no suspects at this time,” Sgt. Mike Richard said.

Another candidate in the race, Lorraine Michetti, says her signs have been tampered with from the moment she started putting them up.

The third candidate for mayor, Tyler Randall, could not be reached for comment Monday.

Both Michetti and Kelly said they were concerned about the how the vandalism reflects on the town.

“It’s not good at all,” Michetti said.

While Kelly reported the vandalism of his signs to the police, Michetti opted not to.

“It’s not worth my time and energy,” she said. “I put my name forward. If you feel that you need to paintball my sign or (destroy) anything, it doesn’t stop me from running.”

“If somebody has got an issue with me, fine. Come and cuss me out. But don’t start wrecking my personal stuff,” he said. "It hurts the (reputation) of Pouce Coupe."

The buggies, which were built in the early 20th cenutry, are part Kelly’s personal collection.

Dawson Creek Mayor Dale Bumstead chimed in over the weekend with a social media post denouncing the vandals.

“We should all have respect for anyone who puts their hand up to serve their community,” he wrote. “The time and money put forward by candidates (demonstrates) they care about the community. It is healthy to have debate and input, (but) it is really sad when folks feel the need to vandalize signs and advertising.”

Kelly is working on replacing the signs with an arrangement that is “bigger and better.”

He also plans to camp out on the corner from Thursday night until the election is held on Saturday, just to make sure nothing happens.

"I hope there is no more trouble," he said, "but I plan for the worst."

Dawson Creek RCMP are asking anyone who might have information about the ongoing vandalism of election signs in Pouce Coupe to contact them at 250-784-3700.

The village of 740 has been divided over a fight between former Mayor William Plowright and a taxpayer group led by Michetti. Plowright resigned late last year, saying the fight was having an impact on his health.

—with files from Jonny Wakefield