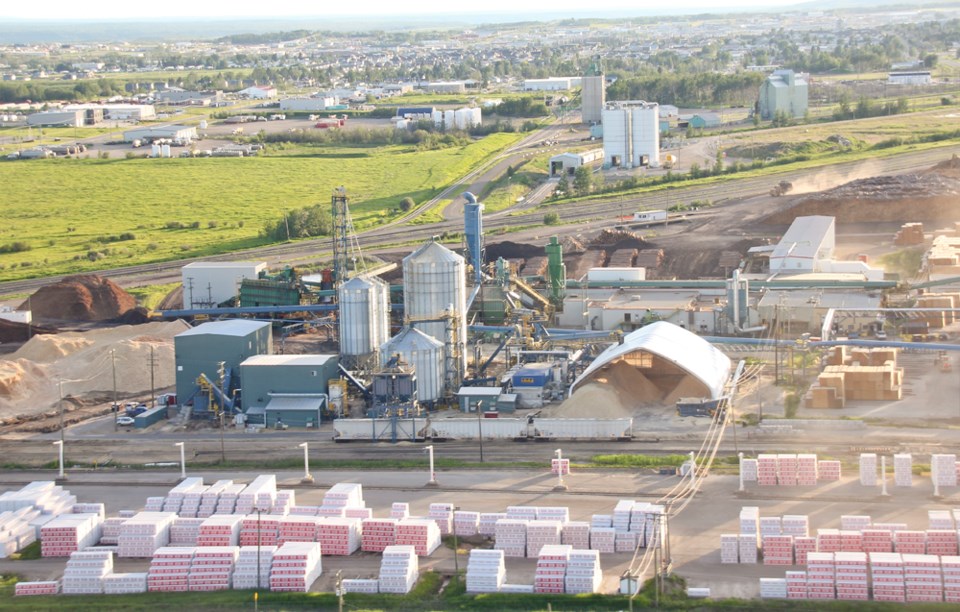 The Canfor sawmill in Fort St. John. Forestry production in northern B.C. declined by more than 50% in March and April, while shipments fell by 27% due to the coronavirus pandemic, according to a new report from the Northern Development Initiative Trust.Matt Preprost

Northern B.C. was not spared from the economic impacts of COVID-19 - according to a new NDIT report.

The Northern Dispatch report from the Northern Development Initiative Trust provides a snapshot of the toll the government-ordered lockdown had on the region.

“The good news is that Northern B.C. has been somewhat less affected by COVID-19 than other regions of the province. This is largely because we’re less reliant on service-sector employment than other parts of B.C.,” writes CEO Joel McKay.

“As well, the global need for the resources that are extracted, refined, manufactured and exported from our region has continued, meaning that our core industries are more likely to recover sooner than industries directly impacted by the pandemic, such as the retail, tourism and service sectors.

“While that’s relatively good news, in no way does it discount the continued need for response and recovery initiatives in the North. Nor should it overwrite the fact that there was general weakness in the northern economy prior to the pandemic due to several regional and global factors that have hampered our resource sectors.”

Employment across the north plummeted by 12,100 jobs between February and May, before a lockdown was imposed and as restrictions on business were first lifted. The Northeast saw the most job losses, down 5,000 over those months, while the Cariboo lost 4,300 jobs, and the North Coast and Nechako 2,800.

On a sector by sector basis, hardest hit were accommodations and food services as well as culture and recreation, which both saw employment drop by more than 40%.

Construction employment dropped by 31% due to the ramp down of construction at Site C and LNG Canada.

“As work resumes at these sites, employment levels are expected to recover,” reads the report, compiled with the help of MNP.

“Significant improvements in employment in industries related to tourism and events is not anticipated as long as the border remains closed and there are restrictions on gathering sizes.”

In forestry, year-over-year production declined by more than 50% in March and April, while shipments fell by 27%. That followed on the heels of an already weakened start to 2020: In January and February production was down 14% and shipments were down 23% year-over-year.

“After a difficult period in which there were a number of permanent mill closures in B.C., there were some promising signs in the North American construction market at the end of 2019,” the report reads.

“US housing starts were increasing and there was strength in the remodeling sector. However, by late February market conditions were weakening as COVID-19 spread and lumber prices declined.”

Looking at forestry job numbers, employment in harvesting was relatively stable while manufacturing jobs declined modestly relative to 2019 levels in the first six months of the year, the report said.

“The outlook for the B.C. forestry sector is mixed,” the report states.

“While lumber prices have increased as mills return to production lumber, supply is expected to increase which could put downward pressure on prices. In addition, physical distancing requirements are increasing the cost of harvesting in remote areas which could raise costs for some producers.”

As for the path forward, NDIT notes it will continue to invest in community development initiatives and capital projects to put residents to work in the short-term.

Meanwhile, it notes energy sector construction at Site C and LNG Canada, and on the Coastal GasLink and Trans Mountain pipelines will also put thousands back to work.

The pandemic “presents an opportunity to address long-standing issues to ensure Northern B.C. is viewed as a competitive jurisdiction for investment and job creation globally,” he wrote.

“We cannot control what happens beyond our borders – but we can control how we respond to it. Now is the time to respond with optimism, action and to push for a better future for our region.”

Read the report in full below: