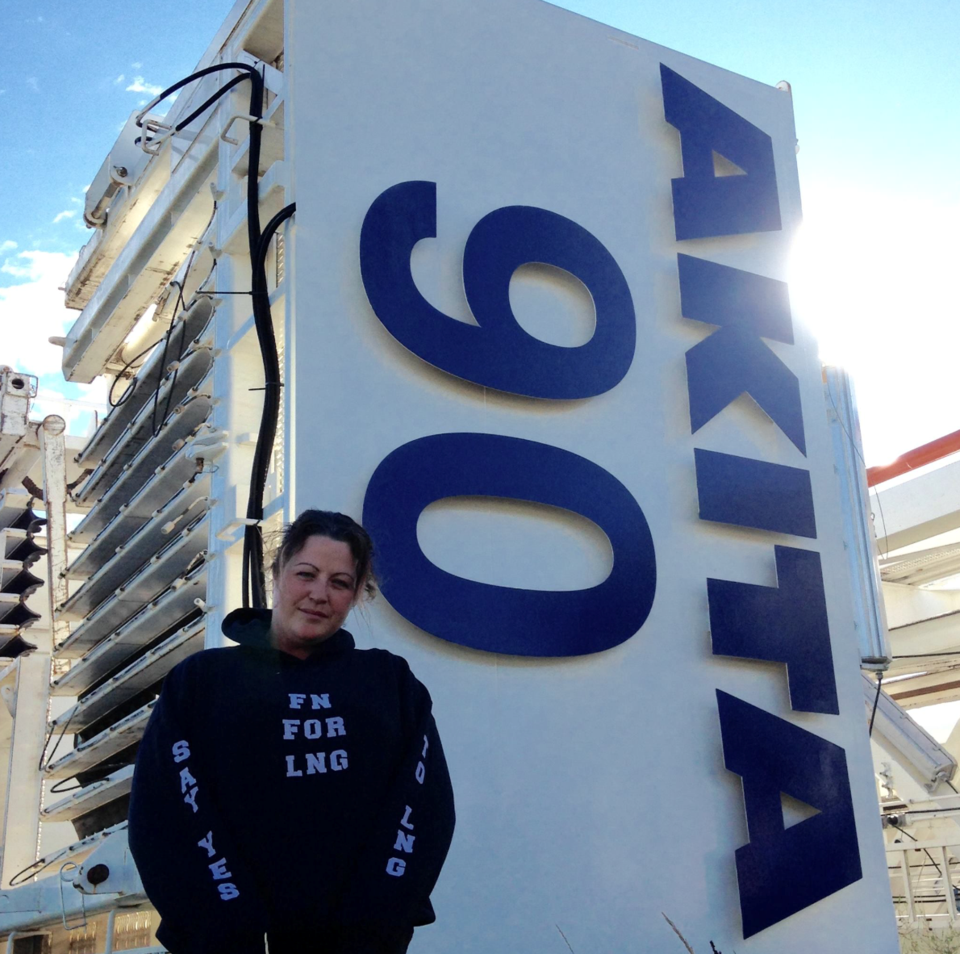 Kristi Leer stands by an idle drilling rig. Her oilfield traffic control company Kleer Enterprises is one of many in Fort Nelson that have been forced to lay off employees during the latest oil downturn. She's counting down the days until the Trudeau government's decision on a controversial LNG plant that many believe could turn around Northeast B.C.'s struggling natural gas industry.Supplied

As a businesswoman in Fort Nelson, Leer has gobbled up every piece of news she can find about Pacific NorthWest LNG—a massive liquefied natural gas facility proposed near Prince Rupert that many see as the key to turning around Northeast B.C.’s struggling oil and gas industry. She helped start Fort Nelson for LNG, an advocacy group to push the town’s case to federal leaders. She’s keeping a close eye an online clock to count down the days until the Trudeau government’s decision on the project.

Later this month, the Trudeau government is expected to deliver its environmental assessment decision on Pacific NorthWest LNG. It will be a watershed moment for the new government, which faces pressure from both the hard hit oilpatch and environmental groups that say the project is not in keeping with Canada's climate commitments.

“I moved to Fort St. John just over a year ago because of LNG. If it’s not approved, I may have to consider moving."

Alan Yu, who programmed oilpatch radios before being laid off last year, said the government’s decision would affect whether he stays in Fort St. John.

“I moved to Fort St. John just over a year ago because of LNG,” said Yu, a founder of the advocacy group FSJ for LNG. “If it’s not approved, I may have to consider moving. It’s a big turning point.”

Fort St. John Mayor Lori Ackerman said having a 40-year outlet for the region’s gas would lead to more investment in the town. “It gives us the ability to invest in the resources and add value to them, (and to) do a lot more innovative approaches to how we operate this industry on the ground,” she said.

The federal government planned to deliver its verdict on the project this summer, but delayed after concerns over its impact on both greenhouse gas emissions and Skeena River salmon fisheries. The Petronas-led congolmerate delivered additional details on its environmental mitigation plans June 27.

If the plant gets the go-ahead, Petronas would conduct a “total review” before making a final investment decision. Upstream producer Progress Energy would supply gas via the proposed Prince Rupert Gas Transmission pipeline. However, the company has not finalized its drilling schedule and it’s unclear what immediate impact approval would have on upstream natural gas activity.

Despite that, a go-ahead for the project would be a morale boost for Leer and others struggling with one of the worst oil and gas downturns in a generation.

If the answer is no, “my family will probably be leaving,” Leer said. “There’s nothing else we can do here without oil and gas.”

Federal Environment Minister Catherine McKenna is expected to announce a decision on the project in mid- to late September.

CORRECTION: A previous version of this article stated that Leer created the countdown clock for the federal decision on PNW LNG. In fact, Yu created the clock. We regret the error.