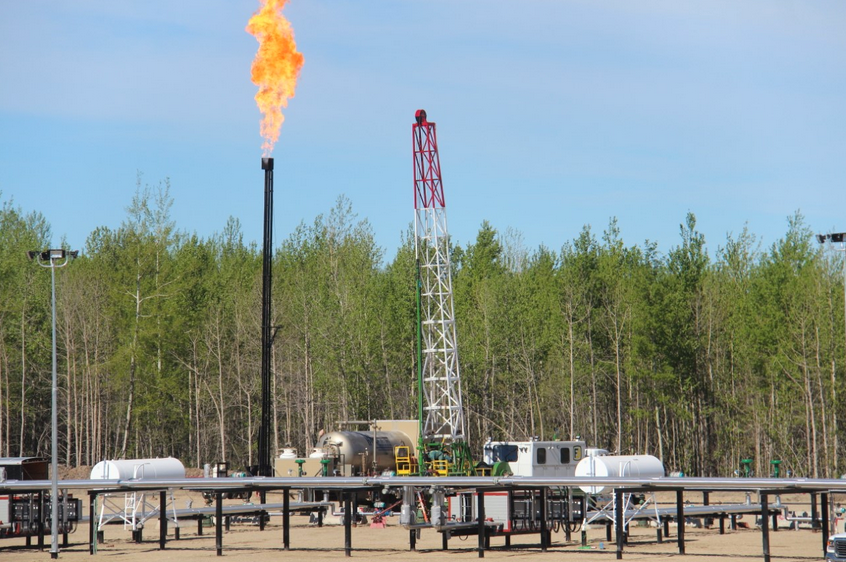 A service rig near Tower Lake. Upstream oil and gas activity has fallen sharply in Northeast B.C. with a drop in oil prices.

Eighty per cent of rigs sitting idle. A flood of labour over the B.C.-Alberta border. A 50 per cent drop in the number of wells drilled.

New statistics from energy regulators and industry groups are shedding light on the grim reality B.C.'s oilpatch faced in the first half of 2016.

Upstream natural gas activity continues to scrape bottom after a punishing 2015. The number of wells drilled is down by half over 2014 levels. Unemployment and employment insurance claims continue to climb, while an industry group says B.C. oilfield businesses are being cut out by desperate competitors from Alberta.

The industry has been hit by a drop in oil and gas prices that began in late 2014, brought on by a global supply glut and an economic slowdown in Asia. Those headwinds have left a big question mark over B.C.'s proposed liquefied natural gas industry, which could shore up the province's oil and gas sector by providing access to the world market.

B.C.'s rig utilization rates, a measure of upstream activity, fell to 12 per cent in the last week of June, down from 37 per cent during the same time in 2014.

B.C.'s drilling fleet averages around 80 rigs. Just five were drilling in late May.

Energy Services BC, a Fort St. John-based advocacy group for the oil and gas service sector, says its numbers have dwindled with the downturn.

The group peaked at 300 members in the past five years. "Today, we've got 75 members," President Dave Turchanski said.

At the association's annual general meeting earlier this month, Turchanski said the local industry is being pounded by Alberta contractors able to underbid their B.C. competitors due to tax advantages.

"Now that the PST is in, we're at least at a seven per cent disadvantage," he said. "A lot of times when Alberta (contractors) come in, they bring their own fuel in. They're not paying the Carbon Tax on their fuels or oil.

"When you start adding that all together you're looking at a 9.5-11 per cent difference. That's going to make the difference in whether a guy gets the bid or not."

He said B.C. needs to to more to ensure out-of-province contractors are paying provincial sales taxes on vehicles and equipment through inspections and audits.

"There's going to be work going on around here, don't get me wrong, but we're going to have to fight for it harder," he said. "We don't want to close our borders off to the Alberta boys coming in, we just want a level playing field."