You don’t see much spanking or even an occasional swat happening any longer. Back in the day, you might get a swat if you continued to do something after being told ONCE to stop. There were rarely second or third reminders before the swat occurred.
Apr 24, 2019 7:11 AM By: Judy Kucharuk 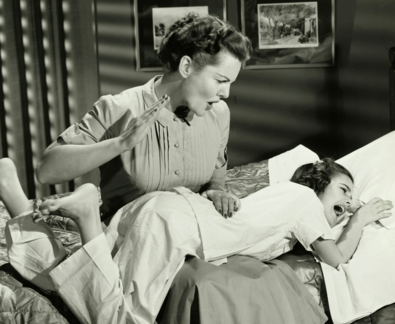 Another popular swat technique was the circle swat where your parent held you captive by one hand while trying to swat you on the buttocks with the other hand.

You don’t see much spanking or even an occasional swat happening any longer. Back in the day, you might get a swat if you continued to do something after being told ONCE to stop. There were rarely second or third reminders before the swat occurred. There were various and sundry types of swats that you might receive: The reach around swat happened if you were kicking the seat in front of you in the car. Your Mom or Dad would reach around with one hand while still steering the big ol’ Chrysler four door land yacht AND holding a cigarette with the other hand and blindly SWAT you on whatever body part they could reach.

A swat normally referred to the connection of the hand to the body once. Multiple swats at one time would be referred to as a spanking.

Another popular swat technique was the circle swat where your parent held you captive by one hand while trying to swat you on the buttocks with the other hand. Invariably you would travel in a circle trying to get away from the offending hand. Probably humorous to watch if you didn’t know what was happening.

I would marvel at how quickly the swat could happen. There was barely a, “Judy! I told you to quit…SWAT!” My mother could put Mr. Miyagi to shame with her lightening fast reflexes. She was quick!

We could expect the same at school from our teachers who would smack your hand with a wooden ruler….bam! You wouldn’t even know that they were packing until you felt the sharp pain of the ruler flick onto the sensitive part of your hand. I remember uttering bad words under my breath as tears welled in my eyes and I was overcome with humiliation.

Society evolves and much like cigarette smoking, both the swat and the spanking are no longer acceptable lifestyle choices. To think that we thought that we could reason with a toddler by delivering a spanking is embarrassing and makes me uncomfortable.

As parenting became much more complex, so did the punishment or consequences bestowed upon children. Personally, I wasn’t much of a swatter or someone who gave spankings. My children grew up in the decades where various child psychologists were researching the efficacy of time-outs. The granola parents were the first to engage this type of parenting, while the rest of us remained on the fence. “You mean that you can teach a child consequences by sending them to their room for a time out?” We couldn’t fully grasp the witchcraft that must be involved with this parenting technique.

I remember the last time I engaged in any altercation with my then teenage daughter. The only thing I could do to get her to PLEASE STOP was to actually sit on her. I believe that situation ended with laughter but not before both of us looked at each other with an expression that said, “We are getting too old for this stuff”.

Now I am a Grandparent and the urge to swat or deliver a spanking is a rare occurrence. I have not and probably will never do either to any of them for obvious reasons: It doesn’t work and I would never want to be the person to cause them pain. I can teach them consequences without laying a hand on them – that darn witchcraft works.

Judy Kucharuk is a lover of sarcasm, witty people and footnotes. You can read her book “Naked Tuesday” or catch her on CBC Radio Daybreak North where she shares her “Peace of Mind”.