Here's a secret - we writers write these things live. Live. Yes, we go back and edit but the initial write is the intention in news, and emotion in stories that are not sometimes news - but more feature in presentation.
Jul 3, 2020 6:32 PM By: Rob Brown 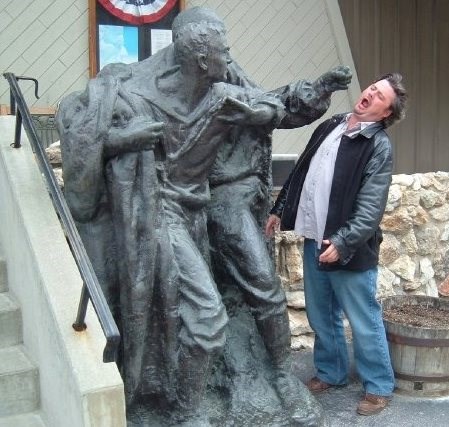 A trip to Mt. Rushmore is fun every time for the editor. Not so much the footage today.
Here's a secret - we writers write these things live. Live. Yes, we go back and edit but the initial write is the intention in news, and emotion in stories that are not sometimes news - but more feature in presentation.

I have paused and shed tears over people, events, death, strong emotional moments and more. I have never done it for a place. A physcial location. In South Dakota right now - the eve of July 4, 2020 sees protests, tear gas, more.
President Trump is set to touch down in Rapid City, SD within the half hour. Now I didn't know that - although any journalist could have predicted that most presidents may circle the 'Four on the Mountain' around July 4 each year.
I said to someone a couple weeks back - "South Dakota, Sturgis, that's the place to be for coverage - it's going to be a (long) hot summer in that area this year."
Over the last 30 minutes there has been 'contact' in Keystone, South Dakota. Live. Sheriffs (slightly) physically clashing with protesters live on the ground.
Keystone, South Dakota is the community at the base of Mt. Rushmore. For more 30 years now when there, I have had a buffalo burger at the same table, same restaurant. I hope that still happens one day.

The giant Crazy Horse project is in the area. I love it. Deadwood. Yes, yes the show, but some of us were hip to the scene decade before HBO.
This area is where Wild Bill Hickock met Calamity Jane.
Where Hickock checked out. Where Custer really underestimated everything, and everybody. Signs for Wall Drug for miles and miles and miles.
This area is where Sacagawea met Lewis and Clark.
Today? "Bean bags, or rubber bullets?"
This area is where Joe Alves in the late 1970s scouts the world (with no internet or iPhones) for simply the words 'strange mountain' in a script and finds Devil's Tower in Wyoming for a young director named Steven Spielberg for a small film called Close Encounters of a Third Kind.
Live now, the sheriffs have made their way to protestors after three vans pulled up, blocked the area and had their own tires slashed.
The Black Hills. This area's main jewel is Mount Rushmore.

The -pride- in this area is what has captured my imagination for more than 30 years now. Pride over a giant rock with faces. Pride over an even larger carving of Crazy Horse, that will one day DWARF Rushmore in time put on, and sheer scale.
Pride of long dead silver and gold mining, history. And some gunslinging in there too. America. Americana.
I hope it's still there when this picture today is, as they say, wrapped.

As noted, Sturgis has a modern event coming up, I wonder how that one will go with 2020 vision.
editor@dcdn.ca