The federal government is making it more difficult to develop thermal coal in Canada with a new policy that says all such mines create "unacceptable environmental effects.
Jun 11, 2021 3:44 PM By: Canadian Press 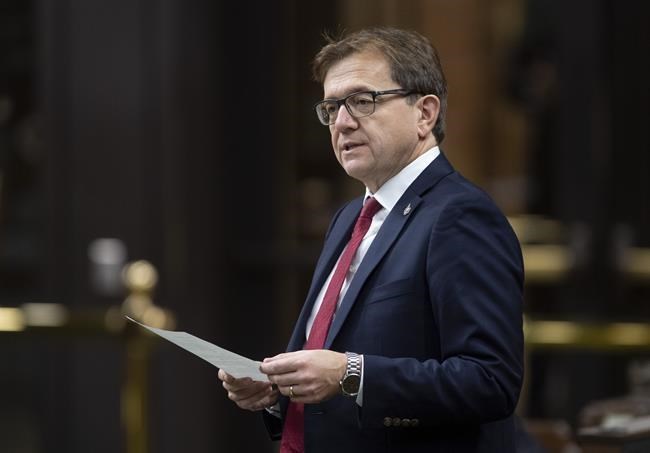 The federal government is making it more difficult to develop thermal coal in Canada with a new policy that says all such mines create "unacceptable environmental effects."

The move erects another roadblock for Coalspur Mines and its proposed Vista mine expansion in Alberta, the only such mine in Canada currently before regulators.

Federal Environment Minister Jonathon Wilkinson said the move was made because of the need to stop burning coal for power — the single greatest source of greenhouse gases in the world.

"Phasing out thermal coal is the most critical climate change issue right now," he said.

The policy, released Friday, does not rule out such development. But approvals will be tough to get.

"The government of Canada considers that any new thermal coal mining projects, or expansions of existing thermal coal mines in Canada, are likely to cause unacceptable environmental effects," it says. "This position will inform federal decision making on thermal coal projects."

It says the federal cabinet must consider sustainability and climate change in weighing any new projects, regardless of size.

"What we're saying is this is something that does not fit from a public policy perspective," Wilkinson said. "A proponent can continue on through the process, but that's a pretty high bar to surmount."

Coalspur's Vista mine expansion project near Hinton, Alta., which would be the largest thermal coal mine in North America, has filed an application to the provincial regulator. Wilkinson has ruled the project should face a federal environmental assessment, although Coalspur is challenging that decision in court.

The company has been informed the new policy will apply to it, Wilkinson said. He added the policy gives more certainty to other companies considering similar projects.

The Alberta government accused Ottawa of changing the rules mid-game, without consulting the province.

"The federal government must stop moving the goalposts on natural resource project approvals," said Energy Minister Sonya Savage in an email. "Sudden and unexpected changes in direction, like this one, will have long-lasting implications on job creation and investment."

Savage said only Albertans should have a say in how the province's natural resources are developed.

Wilkinson said he believes the new policy lies within federal power despite its impact on those resources.

Marcel Michaels, mayor of Hinton, Alta., where most of the Vista mine's 300 workers live, said the new policy comes before he has seen any kind of transition plan for miners in his community.

"I don't see a plan by the federal government that Canadians understand that are replacing these jobs. That's what we need."

Michaels said thermal coal will continue to be mined outside Canada. He said the federal government should restrict its development only in response to similar moves by other countries.

"If there was no other thermal coal mines in the world, I'd be the first one to say time to close this. We're just trading off jobs here for another country."

Canada is a founding member of the Powering Past Coal Alliance, a group of countries trying to reduce the use of thermal coal around the globe. Wilkinson said permitting new mines would harm Canada's efforts in that forum.

"We've been the leader in the international community telling other countries that they should be phasing out thermal coal — and then we approve new thermal coal mines? People would say that doesn't make any sense."

The new policy does not affect metallurgical coal, the type of coal found in most of the controversial new coal exploration projects in the Alberta foothills.

The federal government has been asked to step in on many of those projects. Wilkinson has until July 1 to decide if he will request a federal assessment for Montem Resource's Tent Mountain mine.

"(Thermal coal) is a short-term issue," he said.

"Our commitment with other countries is to help them phase out (coal) nine years from now. That's not much time."

Canada has promised to phase out the burning of coal for power by 2030.

The Cline Group, owners of Coalspur Mines, did not immediately respond to a request for comment.

But environmental groups, clean energy think tanks, and environmental lawyers all praised Wilkinson's announcement. At least eight such groups released statements in support, some urging Wilkinson to go further by banning the export of U.S. and Canadian thermal coal through the Port of Vancouver.

"The final step is for Canada to end its practice of exporting Canadian and U.S. thermal coal around the world," said Julia Levin of Environmental Defence.

Others urged the federal Liberals to pass their promised Just Transition Act, intended to help workers such as thermal coal miners.

This report by The Canadian Press was first published June 11, 2021.