A man who the Canadian government alleges was an active participant in a massacre that left more than 150 villagers dead in Guatemala is living in Canada and should be prosecuted here, two civil society groups said Wednesday.
Jun 16, 2021 3:08 PM By: Canadian Press 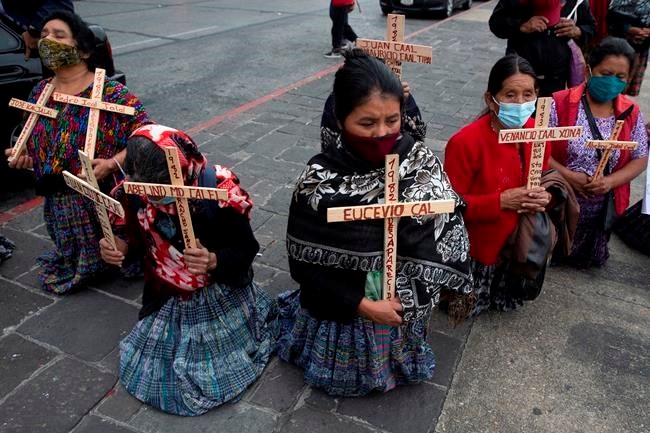 A man who the Canadian government alleges was an active participant in a massacre that left more than 150 villagers dead in Guatemala is living in Canada and should be prosecuted here, two civil society groups said Wednesday.

Pascal Paradis, the executive director of Lawyers Without Borders Canada, told a virtual news conference that by prosecuting Jorge Vinicio Sosa Orantes under its Crimes Against Humanity and War Crimes Act, Canada would demonstrate its commitment to fighting impunity for war criminals.

"Is it something that we want? That Canada be considered by war criminals as a safe haven and they come here for quiet retirement days? That's not what we want," Paradis told reporters.

Sosa Orantes was deported from the United States to Canada on Oct. 19, 2020, according to U.S. court records. He had been serving a 10-year sentence in the United States for immigration fraud after he was convicted of lying in a citizenship application about his role in Guatemala's civil war.

Paradis said evidence that Sosa Orantes was an active participant in the 1982 massacre in the village of Las Dos Erres has also been presented at the Inter-American Court of Human Rights and in Guatemalan courts.

The Canadian government has been attempting to strip Sosa Orantes of Canadian citizenship since 2017 on the grounds that he was a member of the military special forces unit that committed the massacre and that he lied about his role when he applied for citizenship here. The military members killed at least 162 civilians, including 67 children. Women were raped.

"The members of the special forces group killed their victims by hitting them on the head with a sledgehammer, by hitting their heads on a tree, by shooting them, or by slitting their throats," the federal government alleged in a court filing. It said victims — some still alive — were thrown in a dry well and that Sosa Orantes fired a gun and threw a grenade into the well.

In documents filed in the Federal Court of Canada, Sosa Orantes has said he was not even in the village of Las Dos Erres when the events in question took place. Arvin Afzali, the lawyer representing Sosa Orantes in his immigration case, declined to comment Wednesday. A message left at a number with an Alberta area code listed as a contact for Sosa Orantes in U.S. court filings was not returned.

Paradis told reporters Wednesday evidence indicates that Sosa Orantes played a leading role in the massacre. "He is in Canada, and the only option the Canadian government is considering is expulsion," he said.

The lawyer said the Canadian government needs to explain why it's using allegations of war crimes in the proceedings that seek to deprive Sosa Orantes of his citizenship but has not attempted to prosecute him. "If Canada thinks that Mr. Sosa Orantes is responsible for such crimes .... why is it that the only avenue that we're considering is the immigration proceeding?" he asked.

Under Canada's Crimes Against Humanity and War Crimes Act, people in Canada can be prosecuted for crimes committed outside the country. However, only two people have been prosecuted under the law, both for crimes allegedly committed during the Rwandan genocide, said Fannie Lafontaine, the executive director of the Canadian Partnership for International Justice.

She said Canada's Crimes Against Humanity and War Crimes Program is underfunded and is primarily focused on preventing alleged criminals from entering Canada and removing them from the country, rather than prosecuting them.

"It's a serious problem," she said. Lafontaine said if Canada doesn't act, it's unlikely Sosa Orantes will face justice for his alleged crimes.

In court documents filed by Sosa Orantes in the United States, he maintains that he did not receive a fair trial in that country and that no genocide or crimes against humanity were committed during Guatemala's civil war.

A spokesperson for the federal Department of Justice said in an emailed statement it does "not discuss any actions related to allegations of war crimes or crimes against humanity until such actions are made public through the courts."