ALBERTVILLE, Ala. (AP) — A worker killed two people and wounded two more at an Alabama fire hydrant factory early Tuesday before killing himself, police said. The gunfire — among the latest in a spate of shootings across the U.S.
Jun 15, 2021 10:28 AM By: Canadian Press 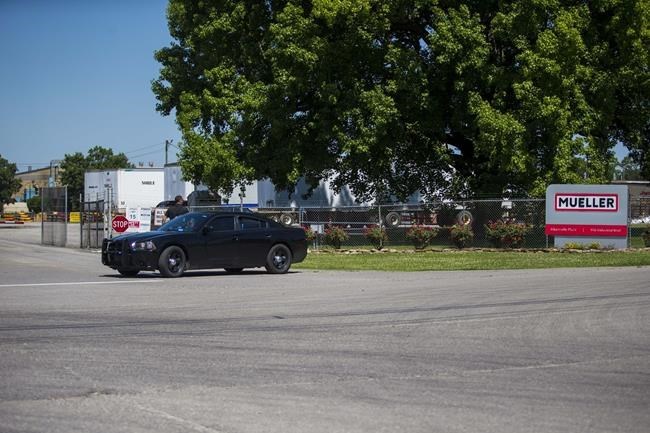 The gunfire — among the latest in a spate of shootings across the U.S. — broke out about 2:30 a.m. at a Mueller Co. plant in Albertville, Smith told reporters. The gunman then got in a vehicle and left the factory. His body was found hours later inside a car in Guntersville, about 15 miles (24 kilometers) away, Albertville Police Chief Jamie Smith said.

“The person was deceased from what appears to be a self-inflicted gunshot wound,” Smith told Al.com.

Smith says it wasn't immediately clear what prompted the shooting.

Cody Windsor, a Mueller employee who was at home when the shootings occurred, told the AP that he knew both the shooter and one of the victims, but didn't know what might have prompted the shooting.

Friends working the overnight shift said the shooting happened in a part of the plant where fire hydrants and pipes are painted, and that an announcement about an active shooter was made over a PA system at the factory, which occupies several buildings over a large area near a railroad track, with fire fire hydrants stored on racks outside.

“We work together and we bond together. We’re here as much as we are at home,” said Windsor. From now on, he said, he might be nervous “that somebody is going to walk in the door and shoot you.”

A company representative did not immediately respond to an email seeking comment.

Mueller Co., based in Cleveland, Tennessee, is a subsidiary of Atlanta-based Mueller Water Products Inc., which calls itself a leading maker of water distribution and measurement products in North America. More than 400 people work at the plant in Albertville, giving the city in northwest Alabama its nickname of “Fire Hydrant Capital of the World.”

The factory shooting comes amid a torrent of gun violence nationwide that has police and criminal justice experts concerned. Within hours of the Alabama gunfire Tuesday, four women were killed and four other people were wounded in a pre-dawn shooting at a home in Chicago, police said. And the toll from this past weekend included two people killed and at least 30 others wounded in mass shootings in Chicago, the Texas capital of Austin, and Savannah, Georgia.

Law officers had hoped that a spike in U.S. homicides last year would subside as the nation emerged from coronavirus restrictions, but they remain higher than they were in pre-pandemic times.

“There was a hope this might simply be a statistical blip that would start to come down,” said Chuck Wexler, executive director of the Police Executive Research Forum. “That hasn’t happened. And that’s what really makes chiefs worry that we may be entering a new period where we will see a reversal of 20 years of declines in these crimes.”

Albertville is a tight-knit community, and residents will come together to support relatives of those killed and injured, city spokeswoman Robin Lathan said.

“Everyone is absolutely heartbroken and devastated,” she said. “The Mueller Company is part of the lifeblood of who we are in the city of Albertville. It’s just a devastating blow.”

In Alabama, a maintenance worker from North Carolina arrived at the plant early Tuesday, unaware of the deadly shooting hours earlier. John McFalls said he spent five days in the plant last week and saw nothing out of the ordinary.

“Everyone here was friendly,” he told Al.com. “Radios playing, everybody getting along.”

He swallowed hard as he heard what had happened, the news site reported.

“I was thinking about coming in early this morning and getting the jump on everything,” McFalls said. “It’s kind of shocking, and then it isn’t, given the state of the world.”