ST. JOHN'S, N.L. — About 100 oil workers gathered outside Newfoundland and Labrador’s legislature Monday, a day before Suncor Energy was expected to announce whether the Terra Nova offshore oilfield will be shut down for good.
Jun 14, 2021 1:06 PM By: Canadian Press 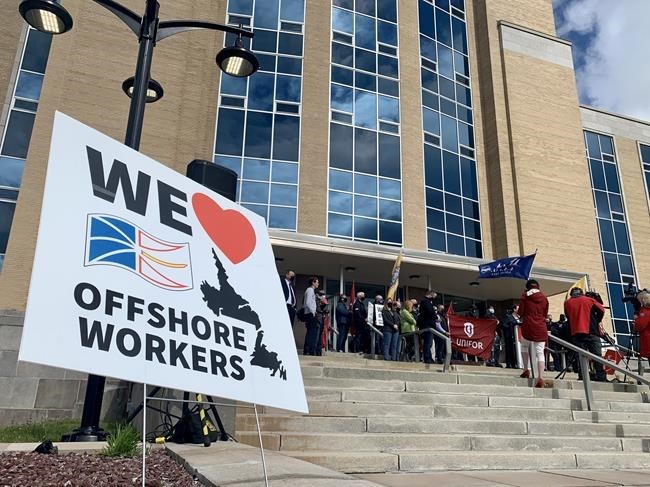 ST. JOHN'S, N.L. — About 100 oil workers gathered outside Newfoundland and Labrador’s legislature Monday, a day before Suncor Energy was expected to announce whether the Terra Nova offshore oilfield will be shut down for good.

Though union leaders and politicians gave rousing speeches about staying strong as they thrust their fists into the air, many eyes in the crowd were wet with tears.

Union leader Dave Mercer’s gaze drifted downward as he talked about how he and his colleagues were feeling heading into what will likely be a sleepless night before Tuesday’s expected decision. "I haven't slept in weeks," the president of Unifor Local 2121 said after the rally, his wife standing beside him trying to control her tears. "If we go into abandonment phase tomorrow ... then we got let down by all these oil companies."

The Terra Nova oilfield is one of four offshore oil installations in the province, and it hasn't produced oil since December 2019.

The field, about 350 kilometres southeast of St. John's, operates using a series of wells drilled into the seabed and connected to a massive floating production and storage vessel through a network of cables and pipes. All that infrastructure needs extensive maintenance and retrofitting work in order to keep the oil pumping, but not all of the project's partners are on board to foot the bill, says Suncor Energy, the field's majority operator.

The provincial government offered more than $500 million in cash and royalty adjustments to keep the project afloat, but the offer was refused, Energy Minister Andrew Parsons announced last week. He also said the province would not purchase an equity stake in the operation, calling it too risky.

Brian Murphy, a national representative with Unifor, said that if Suncor announces it is abandoning the project, "it's going to be the end of an era." Murphy wears a black leather hat with an embroidered picture of the Terra Nova vessel on the front. He bought it in 2001, he said, during his first offshore rotation on the ship.

In the crowd, Wayne Alexander and Steve Taylor stood with their hands in their pockets, talking and nodding with other men. Taylor was laid off two days before Christmas last year after working with the Terra Nova operation for two decades. "We hoped it was a temporary layoff in the beginning," he said.

At 55, Taylor said he's "a little bit better off" than some of the younger offshore workers who've lost their jobs. His children are grown now, he said.

Alexander, whose twin girls are just seven years old, is an instrumentation technician who is among the roughly 25 people still working on the vessel, now anchored near St. John's. Alexander started working with Terra Nova in 2007, after a few years of work in Alberta, he said. "If this doesn't go forward ... I can't sit around and wait," he said. "If it's not here, it's Alberta. I'll work somewhere."

Morale among the remaining workers is "up and down," he said, adding, "It's been an emotional roller-coaster since December 2019."

Both Taylor and Alexander note there are still at least 80 million barrels of oil left in the field and say they can't understand why any company would leave that behind.

Seamus O'Regan, the federal natural resources minister, attended the rally and told reporters afterwards he's "hopeful" Tuesday will bring good news for the Terra Nova workers. "I've asked the partners who are involved to be creative if they possibly can," he said.

As people left the demonstration outside the legislature, politicians gathered inside for a special debate about the oilfield, with the governing Liberals fielding questions about why they declined to buy a stake in the project.

Tom Osborne, the province's former finance minister and current education minister, pointed to the provincial debt, which is expected to hit $17.2 billion this year. "The fact that the history of this province has been to buy jobs at all costs ... has put the province in the debt that it's in," he said.