Brooke (Grade 9) and Britney (Grade 12) started rodeo at the same time and have always pushed each other to do better
Aug 19, 2016 4:22 PM By: Dawson Creek Mirror Staff 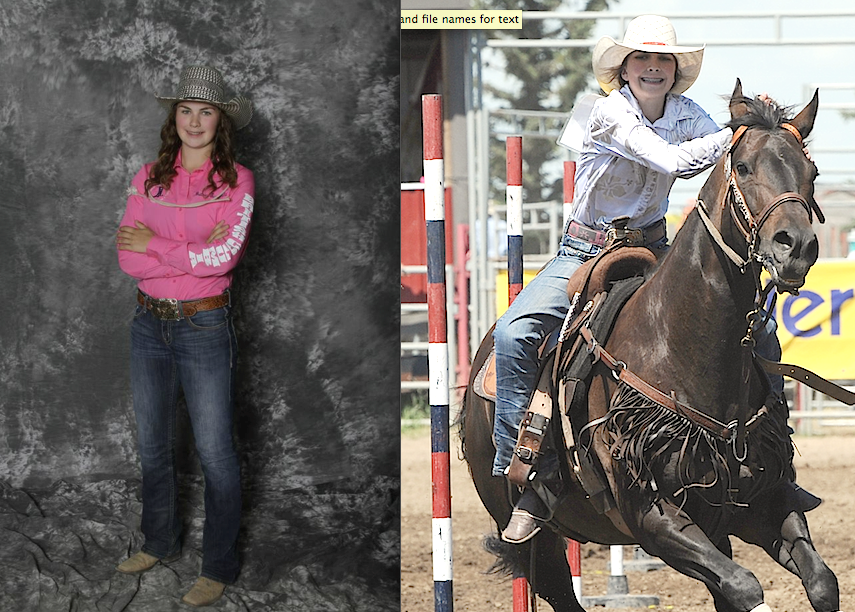 Britney (left) and Brooke (right) are two sisters who will be competing against each other for the first time on the high school rodeo circuit this coming season.Supplied

Like many families in the Peace Region, competeing in rodeo is a tradition carried on by generations of Swaffields.

The family who lives south of Dawson Creek, sends sisters Brooke and Brittany to events each year. They were inspired to get into the sport by their grandparents years ago and they started at the same time, even though Brooke was still too young to compete. Since then, they have pushed each other to be better.

This coming High School Rodeo season, the two will be competing against each other for the first time.

“We live in the same household and it’s going to be interesting I guess, competing against her,” the elder, Britney who is entering Grade 12 this fall said.

Brooke, who going into Grade 9, has used her big sister as a measuring stick for a while, according to mother Charity Swaffiled.

“Brooke has always looked up to her sister through the years in everything they do,” she said. “They’ve worked hard to get where they’re at.”

While she can still learn a lot from her older sister, it was Brooke who in her last season as a junior, stole the show this past summer while Britney watched from the sidelines — shelved by an unfortunate shoulder injury.

With that kind of momentum on her side, she is excited to move up into a new class of competition.

“Even though I am going against Grade 12 girls, I feel still have a chance,” Brooke said. “It’s a little bit (intimidating) but I am going to try not to let it get to me. I have the ability. I am confident. I am going to prepare myself physically and mentally. It just means I have to practice harder and push myself to be better.”

Most of that practice will come with her sister at her side, giving helpful hints when it comes to roping and goat tying especially.

“I’m better at barrel racing,” Brooke said, “I’m not the best at roping and (Britney) pretty good. Whenever I am (practicing) roping she’ll say things like keep your elbow up. Those little tips help me a lot.”

But Brooke will also have some coaching for Britney.

“We give each other little tips,” Britney said. “We’re going to push each other to (do better).”

Charity said seeing both her daughters on the rodeo circuit fills her with pride.

"They’ve accomplished so much in the sport,” she said. “I am very proud of them because of what they’ve done and the work ethic they’ve put into it.”

The travel in the summer gets busy and the cost is much more than any other sport the girls have been involved in, but it’s worth it Charity added.

“It’s a lot of work and cost,” she said. “The girls have done dance, soccer and downhill skiing but this I think is the most expensive for what we’ve done, but it’s rewarding.”

On Aug. 27 and 28 in Doig River, the sibling rivalry will officially begin with the first High School Rodeo of the season. It’s sure to make for some interesting dinner table conversation.