Jul 3, 2021 5:08 PM By: Dillon Giancola
Previous Next
1 / 1 Tucker Esau, who was a dual-credit team member last year, is joining the NLC Rodeo Team next season as a fulltime student.NLC Marketing
Expand
Previous Next

The Northern Lights College Rodeo Team heads into its fourth season this fall, and the team in the 2021-22 saddle will be bigger and better than ever.

Not just in terms of the amount of riders, though the 12 committed members is nearly double the seven committed a year ago, but the 2021-22 season promises to be an action filled affair after a full year without any college rodeos.

Returning to the team next season are High Point Cowgirl Tyler Bondaroff and High Point Cowboy Tucker Esau, both of Dawson Creek. Keaton Collett of Beaverlodge is returning for her third season with the team, while Justin Harris of Courtenay will be back for his second year.

Joining them for next season are Averee Whitewood and Kevin White of Dawson Creek, Aspen Wollen of Fort St. John, and Brekan Loewen of Charlie Lake. Ryan Collett will compete alongside sister Keaton, while bull rider Lane Paley of Quesnel is back after a year off. Rounding out the team are Shardy Coxon from Clinton, B.C., and Jared Froese of Peace River, as well as Dawson Creek's Rachel Moat, who will be a dual-credit student next year. There are a number of riders who have yet to commit, and team coordinator Leanne Esau is hoping that their goal of having 15 team members will be met by September.

"I've been around this family for a long time, and wanted to stay a part of it as long as I could, so joining the NLC Rodeo Team was a great way to do this and I'm really excited to be a part of something like this," said Whitewood, who is graduating form high school rodeo this year. 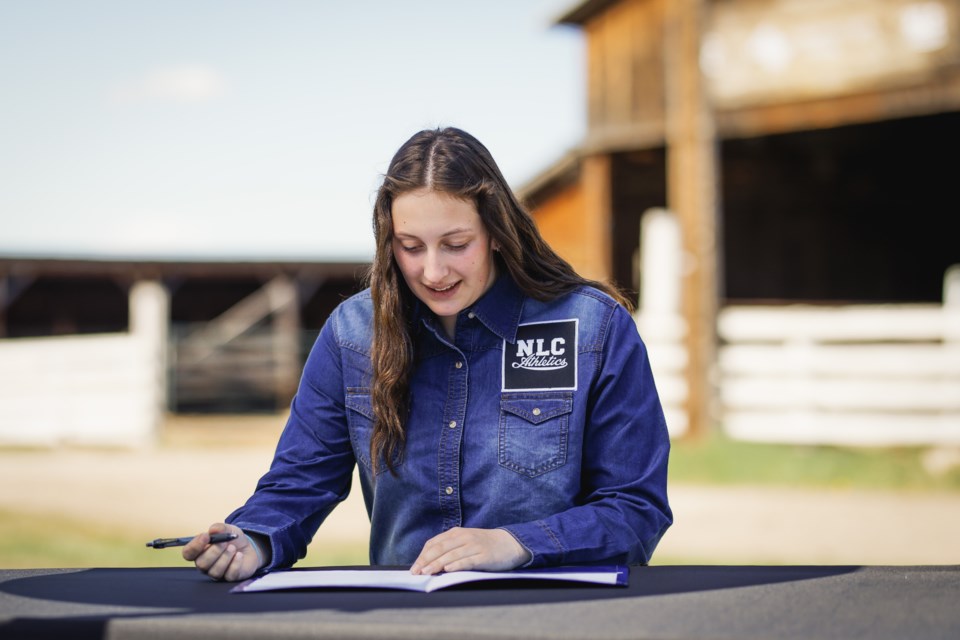 Averee Whitewood signs her commitment to join the NLC Rodeo Team for the 2021-22 season. By NLC Marketing

Whitewood said high school rodeo taught her lots of new skills, like teamwork, encouragement, and she even learned a new event, breakaway roping, which she plans to keep working on at the college level.

Wollen, who graduated in 2020 and took a year off to work, is excited both to be back in school and to be back competing at rodeos regularly.

"I'm excited, my horses are very excited, and I missed not competing last year," Wollen said.

Wollen said she chose to go to NLC and join the rodeo team because it's close to home, they have good coaches, and she is very familiar with everyone involved.

"I hope my horses do good at the college level. I've been riding them for the past two months and can't wait to get started," she said.

Bondaroff, this year's NLC Overall High Point winner, will be back with the team this year, though she may be studying at UNBC in Prince George instead.

"I'll be competing as part of the NLC team either way. There are a lot of people coming back next year, as well as new but familiar faces that I have competed with in the past at high school rodeos and it's really great to see our team grow," Bondaroff said.

Esau, who competed as a dual-credit student while still in high school last season, is excited to be a full time member of NLC and the rodeo team.

"We will have a lot of good people on our team, and hopefully it turns out well for us," Esau said.

Moat is really looking forward to compete in both high school rodeo and college rodeo next year, especially now that there will be actual rodeos (fingers crossed) to travel to and compete in.

"I'm excited to go to different places, it's really important to learn different things from different people and places, and by going up against new competitors, there will be a lot of opportunities to learn something new," Moat said.