Flyers clinch series win in finale at home over Canucks

In a blaze, it was all over. The Fort St. John Flyers scored three times in just 1:56 of the third period in game five against the Dawson Creek Senior Canucks to clinch another epic chapter of the rivalry. Fort St.
Feb 12, 2016 11:44 AM By: Byron Hackett 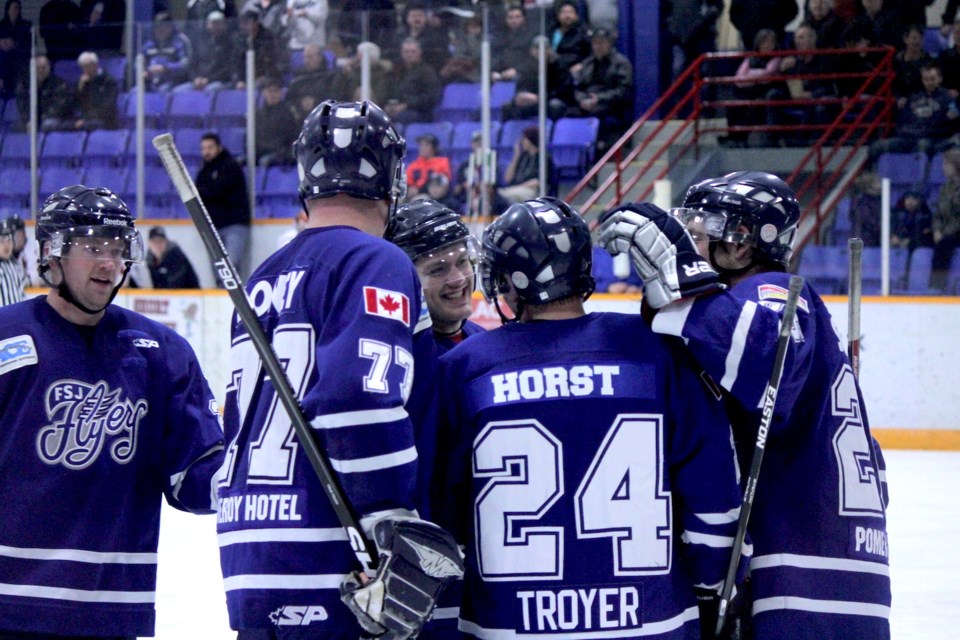 In a blaze, it was all over.

The Fort St. John Flyers scored three times in just 1:56 of the third period in game five against the Dawson Creek Senior Canucks to clinch another epic chapter of the rivalry.

Fort St. John finished the series finale of the North Peace Hockey League quarter-final in grand style, with a 7-2 win.

“We stopped thinking about trying to protect a lead,” head coach Andrew Leriger said of the third period outburst. “We’re not trying to lose the game, we’re trying to win the game and that’s what happens is they get their mind set on let’s not lose this, so then they start sitting back on their heels and you can’t do that with those guys.”

Canucks head coach Mike Cooper said for the final time this season, a defensive breakdown cost his squad the game.

“Defensive zone in the third period is what went wrong,” he said. “For about five minutes and they potted a few and we couldn’t climb back.”

The Flyers had the game in hand with ten minutes left in the third period, but that wasn’t the first time they looked in complete control at North Peace Arena Thursday night.

The Flyers came out at home with all the momentum once again after beating the Canucks 9-1 last time in Fort St. John, scoring twice in the first 12 minutes of the game Thursday, with Ryan Carter and Bryan Lewis giving them the lead.

A totally dominant first slipped away in the second period when the Canucks tilted the ice back in their direction with goals from Colter Maclean and Mike Lalonde.

Veteran Tyler Loney took control of the game for the Flyers when he buried a rebound in the slot with four minutes left in the second on what would eventually be the game-winning goal. Not only did Loney and Lewis each tally a goal and assist, they were also tasked with shutting down the dynamic duo of Chris Stevens and Jeff Taylor, the Canucks top scorers.

“Tyler Loney and Bryan Lewis were studs out there all series,” Leriger said. “I put those two guys out, they’re veterans, they know how to play shut down hockey and their job was to take care of that line and I mean outside of the power play, we dominated. Dawson didn’t have anything to answer us even strength.”

The three goals the came in quick succession early in the third for Fort St. John, from Joey Massingham and two from Adam Horst, who’s line lead the Flyers offensively all series along with Jeff Shipton and Josh Bruha.

“We really just tried to keep it simple tonight,” Horst said of his line’s play. “Keeping the puck down low behind their net as much as we could and really taking care of our end first. And then playing behind their goalline was where we seemed to have success and we tried to keep it down there.”

Brady Bushe added an empty net goal with 2:02 to seal the game.

Troy Hunt made several key saves throughout the night Thursday to earn the win with a 27-save performance.

The Flyers won’t have much time to rest on their laurels as they will turn around quickly Saturday night and travel to Grimshaw to take on the Huskies. The second round NPHL series will flip back to Fort St. John for game 2 on Tuesday.