This year marked a return after broken ice chiller kept curlers off the rink
Apr 6, 2016 10:51 AM By: Mike Carter 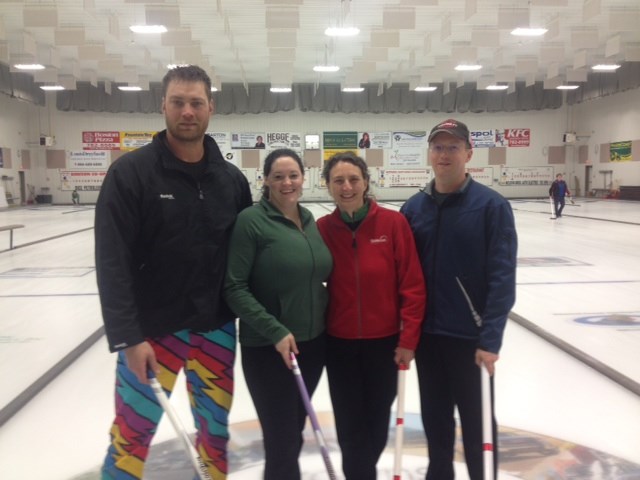 The winners of the "A Event" at the final mixed bonspiel: Team Nernberg. Above are Derek Nernberg, Deanna Larson, Heather Fossum and Ryan FrostSubmitted

Fourteen teams took part in the final mixed bonspiel of the season for the Dawson Creek Curling Club last weekend, capping off a successful return to the ice.

The winter of 2014-15 was a dry one for the city's rink. A broken ice chiller kept the floor bare, canceling the entire season for local curlers.

Membership went up 28 per cent, he said, and numbers for the several bonspiels held throughout the year were higher then they've been in decades.

Losing an entire season left the club management unsure of what to expect.

"I can't say we weren't concerned," Ginter said. "But we've got a really good (group) of new players, which is really keeping us stable for the future."

This past weekends closing spiel saw a big turnout, but was one of the smaller events for the year.

The opening celebration bonspiel brought in about 20 teams and a cash bonspiel in November drew about 40.

"That is by far the best cash bonspiel the Peace has seen for years," Ginter said.

The mixed annual spiel saw 32 teams, the most in two decades and the Men's spiel in March drew 24 teams, the largest attendance in about 15 years, Ginter said.

The Ladies annual spiel numbers dipped a bit, but only because it conflicted with the Scotties Tournament of Hearts in Grande Prairie.

Youth engagement at the rink is a big focus for the club going forward, Ginter said.

He is hoping to get out into some of the schools around the South Peace to promote the game, bringing a floor curling setup with him for the gym to allow kids a chance to try their hand at it.

"Hopefully that will attract a few more for next year and keep them coming back," he said.

Along with beefing up the junior program for next year, he hopes to bring in Northern Lights College international students and introduce them to the game.

"We've got a couple nights where I am going to look at some non-traditional audiences in and try and get some leagues set up for international students," he said.

It looks like a busy year for the rink next year, which will also host the Albert senior Men's and Women's provincial championships in February 2017.

The best eight senior Men's and Women's teams will face-off, with the winners going to represent Alberta at the nationals - even if the team is from B.C.

"Because we're so close, the Peace Curling Association is affiliated with Alberta," Ginetr explained. "I'm hopeful that we can get a local team or two qualified. It'd be nice to see."