Ens grew up in Prince George, but had no idea there was junior hockey in Dawson Creek.
Mar 5, 2021 11:52 AM By: Dillon Giancola 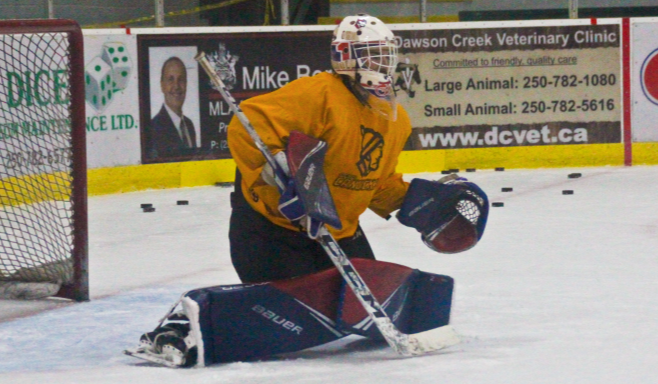 Ens came to the Junior Canucks as an 18-year-old mid-way through the 2017-18 season. Giancola

While there were some good things for the Dawson Creek Junior Canucks to take away from the 2020-21 season – primarily the development of a new, young core – it will go down as a lost season as well. Primarily, it’s a missed opportunity for the Canucks and goalie Matthew Ens in Ens’ final season with the team.

Ens is the Canucks’ longest-tenured player, and is aging out of junior as a 21-year-old after four years between the pipes for the team. Blake Wilson and William Fletcher are the other players in their final year with the team, having played two seasons each.

It’s safe to say, this isn’t how Ens or Canucks coach Colby Wagar thought his final year with the team would go.

“It’s bittersweet, a hard pill to swallow. I’ve done everything I could for the Junior Canucks – this year I thought we could win a championship, but at the end of the day, most people don’t get their 21-year-old season in junior hockey,” Ens said.

“I was blessed to get this chance, to come to the rink, even if it’s just for practice, and to hang with the guys. It stings a little bit, but I take it with a grain of salt, as everyone is going through the same thing I am, it’s all about perspective. I think I got the most out of what I came here for, and am truly happy with everything going on, even though we’re not playing games.”

Wagar thoroughly enjoyed having Ens on the team and wished it could have ended differently.

“I really wanted this to be a big year for (Ens). We were really close with him, losing in the semi-finals to the Peace Rivers and losing in Game 7 the next season, and it’s too bad he didn’t have that opportunity to play real games this year,” said Wagar.

Ens came to the Junior Canucks as an 18-year-old mid-way through the 2017-18 season. Having just been cut by the Chase Heat of the KIJHL, he was devastated and thought about hanging up the pads. However, Wagar had other ideas, and was able to convince Ens to give Dawson Creek a shot.

“When I first spoke to Matthew, he was heartbroken, and I must have spent five hours on the phone with him back and forth that day, and with his parents as they were driving to Chase to pick him up, trying to help him understand what we were building here and what it would mean if he joined the team,” Wagar said impassionedly.

Ens grew up in Prince George, but had no idea there was junior hockey in Dawson Creek.

“The camaraderie and the small town vibe, it’s like no matter who you are or where you’re from, you’re automatically a part of the family.”

Wagar credits Ens with changing the program, and for setting the tone for what kind of players will come here and want to be a part of the Junior Canucks.

“It opens up a lot of doors for us, and helps us get guys we wouldn’t have the chance to get before, and opens up a whole new market of players,” said Wagar.

“I love him to death, he’ll always be a Junior Canuck.”

Ens is exploring his options going forward, and is hoping to play semi-pro hockey, potentially in Europe.