They won't admit it, but no one is surprised we're here. After three tightly contested games and one blowout, the Dawson Creek Senior Canucks and Fort St. John Flyers will play a fifth and deciding game on Thursday in Fort St. John.
Feb 10, 2016 9:31 AM By: Byron Hackett 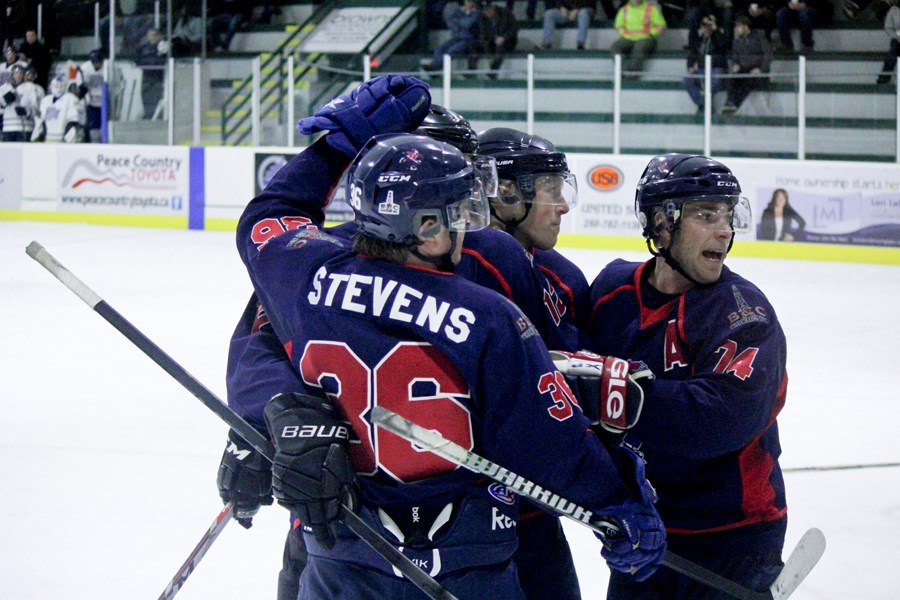 They won't admit it, but no one is surprised we're here.

After three tightly contested games and one blowout, the Dawson Creek Senior Canucks and Fort St. John Flyers will play a fifth and deciding game on Thursday in Fort St. John.

The Canucks laid it all on the line Tuesday night in their home rink, sneaking out a late 4-3 victory in game four of the North Peace Hockey League quarter-final.

“I thought we played a pretty good game other than the first ten minutes,” Canucks captain Chris Stevens said, who had two assists Tuesday including one on the game-winning goal. “But other than that, it’s two tight checking teams and we match up pretty even we’ve had a couple bad games in their barn but we play good at home and it’s nice to get a win.”

The Canucks trailed early and looked to have handed the series to the Flyers, before battling back to tie the game at two with late goals just a minute apart in the first. Tyrell Mason and Lorne Weaver had the tallies for the Canucks.

Jeff Shipton and Adam Horst continued to lead the Flyers offensively with goals in the first, but two breakaway saves by Canucks goalie JB Agar halfway through the period kept the game within reach and gave the home side that little bit of life they needed.

Agar finished the game with 25 saves for Dawson Creek.

The two sides traded chances in the second, with the Flyers controlling possession and Shipton scoring his second of the game on a wrap around to restore the Flyers one goal lead.

Tyrell Mason scored the first of two Canucks power play goals and his second of the game midway through the second period to tie the game at three.

The second PP marker came late in the game, after Flyers goalie Troy Hunt took an undisciplined slashing penalty when it appeared a Canucks player crashed the crease unimpeded.

“We’ve had this referee a couple times, the sad part about it is he’s kind of making a difference in some cases. At the end of the day it’s on us, if we choose to play, we win. We took a dead team out there, we got up two goals on them and [we]chose not to continue.”

That led to the second power play goal, where Jason Higson tipped home a shot from the top of the circle off a Canucks rush with five minutes left in the game.

“There were a couple bounces that we needed that we weren’t getting in other games,” Stevens said.

“We got greasy goals, early in the series I think we were looking for tick-tack-toe goals that are just not there in playoffs. There were a couple that just snuck in on the line or were whacked in right on the doorstep.”

The Canucks will now need to do something they haven't done since Jan. 5 if they hope to take the series—win in Fort St. John.

“We just have to be confident,” Stevens said.

“We have to have confidence. We know it’s going to be a tough test but we’re capable of doing it, we can play with them on the road we just have to play that dirty, greasy hockey to sneak out a win. That’s what we need to look for.”

For the Flyers it's an even simpler answer, the veteran heavy group has to draw on their experience to finish off the series at home.

"If we play the way wecan play,” Leriger said about how his team can win the series.
“We will have a couple more guys in the lineup so our bench will be full. Again, we’re the ones deciding if we are going to win or lose. These guys have to make a decision, they know how to win they’ve done it before, let’s just get consistent and go for it.”