“She’s the best kept secret in British Columbia. She’s one of the better players to come through our program in terms of pure athletic ability.”
Mar 25, 2021 2:58 PM By: Dillon Giancola
Previous Next
1 / 1 Brandi Hanna goes up for a smash during an NBCVC volleyball match last season. supplied
Expand
Previous Next

Brandi Hanna will suit up for the Ambrose University women’s volleyball team next season. Advancing to the college athletics level is an impressive accomplishment for anyone, let alone someone who’s only played two years of competitive volleyball.

Hanna played her first year of competitive volleyball with the Northern B.C. Volleyball Club (NBCVC) last season, in Grade 11, and this year, played with the Dawson Creek Volleyball Club. Of course, competition wasn’t permitted this season, but Hanna was able to get recruited anyway.

“I’m excited, but also a little nervous, because of my inexperience,” said Hanna.

She technically started playing volleyball in Grade 9 as a practice player, and developed a lot as a player playing in Fort St. John’s adult drop-in league. As a student at Christian Life School, she had trouble getting on the other school teams in the region. The two tournaments she played during her year with NBCVC are the only two tournaments she’s ever played on the road.

“I didn’t know what to expect, walking out there in front of a crowd of people for the first time. I didn’t feel nervous, but I was shaking, and my serve was off. I figured that’s how the first tournament would go, shook it off, and moved on to the next one,” Hanna said.

Inexperienced or not, at 6 feet tall, and with her ability to jump and touch a 10-foot rim, Hanna caught the eye of many volleyball coaches over the past year. 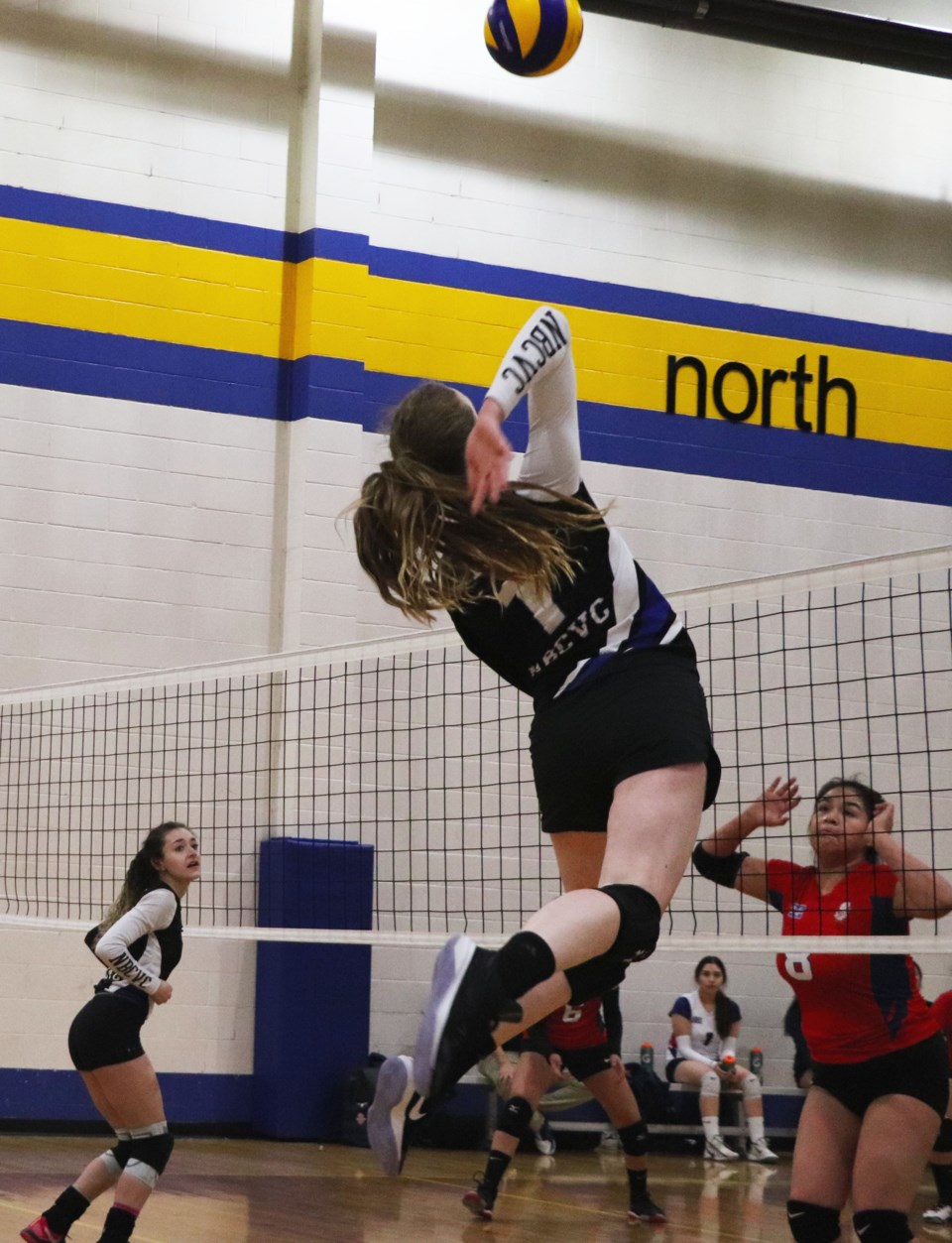 Brandi Hanna's high jumping ability turned a lot of heads in the college volleyball world this spring. . By supplied

“She’s the best kept secret in British Columbia. She’s one of the better players to come through our program in terms of pure athletic ability,” said Aaron Powell, who coached Hanna at the DCVC this year.

“She’s awesome, she works really hard. When I first saw her play in Fort St. John I was blown away by how good she is, and that she touches 10-foot-one is insane for a girl in her age group.”

Powell sent videos of Hannah playing out to a lot of college coaches around the country. She also had the help of Jesse Knight - a former coach of Team Canada who Hanna met through volleyball workshops – who sent emails to other coaches as well. She caught the attention of Ryan Hoffer, the coach at Trinity Western University, a U-Sport school.

Hanna had offers to play at the U-Sport level, but wanted to start out at a smaller school before making the transition to a big university (her current school, Christian Life, has just 150 students, and she’s currently the only Grade 12 student).

She said she’s looking forward to playing volleyball while studying for her degree, and if she’s able to make the switch to U-Sport, she’ll see what happens when the time comes.

She’ll play in the ACAC next year with Ambrose, where she’ll get to compete against DCVC teammates Gabrielle Capelle, Maddie Chabot, and Layla Hingley, who all signed with Grande Prairie Regional College for next season.

Even though there were no games this season, Hanna said the experience she gained practicing with the DCVC this year was very valuable.

“With my limited competing experience, just being able to practice at all has really great. We’ve been practicing since September and I can’t complain,” Hanna said.