101 people moved out of park between weekend and Tuesday

In January, when Glacier Media first met the 55-year-old former pipe insulator, Ehret had neither of life’s necessities, unless sleeping in a converted utility trailer in Strathcona Park constitutes living.

Ehret was back at the park Tuesday, where he was helping a friend move out of a tent into a room at the Patricia Hotel on East Hastings.

“It’s so they don’t feel alone and scared when they get there,” he said, emphasizing the community of friends he and others built at the encampment.

Ehret now lives in a downtown hotel and works up to 40 hours per week as a front-desk attendant at a single-room-occupancy hotel in the Downtown Eastside.

“Bottom line is I’m not sleeping outside anymore,” he said, noting he gave the trailer to another person for shelter.

“Am I lonely? 50/50. Sometimes I’m so grateful that I have my own space and can get away from people. The other 50 per cent is I miss having people around me.” 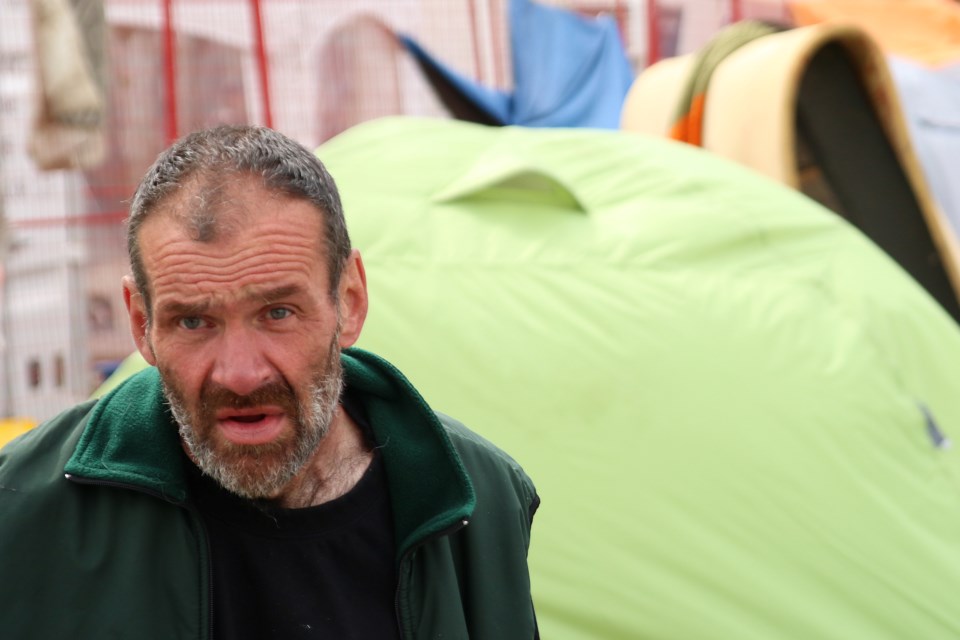 Doug Ehret once lived in Strathcona Park and now has a room in a hotel and a job. Rob Kruyt/BIV News

News of Ehret’s move out of the park brought some comfort to David Eby, the B.C. minister responsible for housing, when he spoke to Glacier Media Wednesday.

“I’m really inspired by Doug’s story and that’s what we’re all doing this work for — is for people to have a fresh start and a chance at a different life other than living in a doorway or park,” Eby said.

In January, the minister promised to put a plan in place to offer housing and shelter to all people living in the park who wanted it — by the end of this month.

The Patricia Hotel, where Ehret’s friend now lives, was one of the hotels the B.C. government recently purchased to help execute the plan.

The Ramada Hotel on West Pender Street and the Burns Block building on West Hastings are other locations set up to accommodate people from the encampment.

Shelters are also in place at the shuttered Army and Navy store on West Hastings, in a building on Terminal Avenue and at a site at the Plaza of Nations.

In addition, the government has 30 rent supplements available for people to move into private housing and a few rooms at a downtown Holiday Inn.

“We’ve got more than enough spaces for the folks in the park — and others who might show up — to offer them dignified spaces,” Eby said.

The minister was hopeful the pace of people accepting offers of housing and shelter over the past week would continue in the coming days.

He said 29 people moved out last weekend, 25 on Monday and 47 on Tuesday, with a similar number to vacate Wednesday. That’s on top of 138 people who accepted housing offers in previous months. 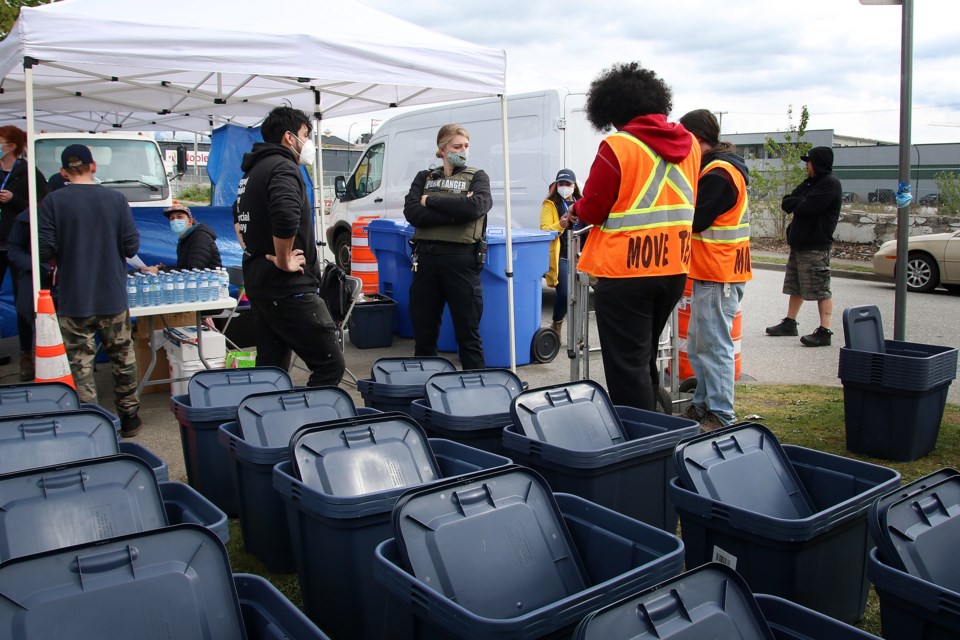 Workers prepare bins for the belongings of people living in Strathcona Park tent city who are moving this week into a hotel or shelter. Photo Rob Kruyt/BIV News

On Tuesday, B.C. Housing staff along with nonprofit housing providers and outreach workers were in the park to help people secure housing and shelter.

Park rangers were on site, moving trucks were parked along the edge of the park while city crews cleared debris from the encampment, which began in June 2020 and reached a peak of 500 campers at one point, according to Fiona York, a housing advocate who was in the park Tuesday.

While she is buoyed by news of people moving inside, York is concerned the accommodations are temporary and hotel policies are restrictive, including not allowing guests.

“They’re not considered tenancies and people don’t have rights and can’t go to the Residential Tenancy Branch with concerns,” she said.

“They don’t get two weeks notice to move out, they get 24 hours. Some people don’t have keys to their rooms and have to be let in and let out. It’s not really independent living.”

York said people she’s talked to in the park are also hesitant about accepting an offer at a shelter during a pandemic.

She pointed to Provincial Health Officer Dr. Bonnie Henry’s repeated advice that being outside is safer than inside.

York’s information is that 60 people from the park have been vaccinated, and that there were few cases of COVID-19 among the encampment’s residents.

Early on in the pandemic, shelters in the city were thinned out to avoid people being in close proximity to each other.

That move was in conjunction with the B.C. government leasing seven undisclosed sites, with 432 beds, as “COVID-19 isolation spaces;” some of those will be available for camp residents, according to a document from B.C. Housing.

To the extent possible, Eby said, people from the park moving inside are being tested for COVID-19 and vaccinated.

“We’re doing the best we can on that front,” the minister said. “It’s not going to be perfect, but there are many public health threats faced by people who are living outside. COVID is just one of them. The other is burning up in your tent.” 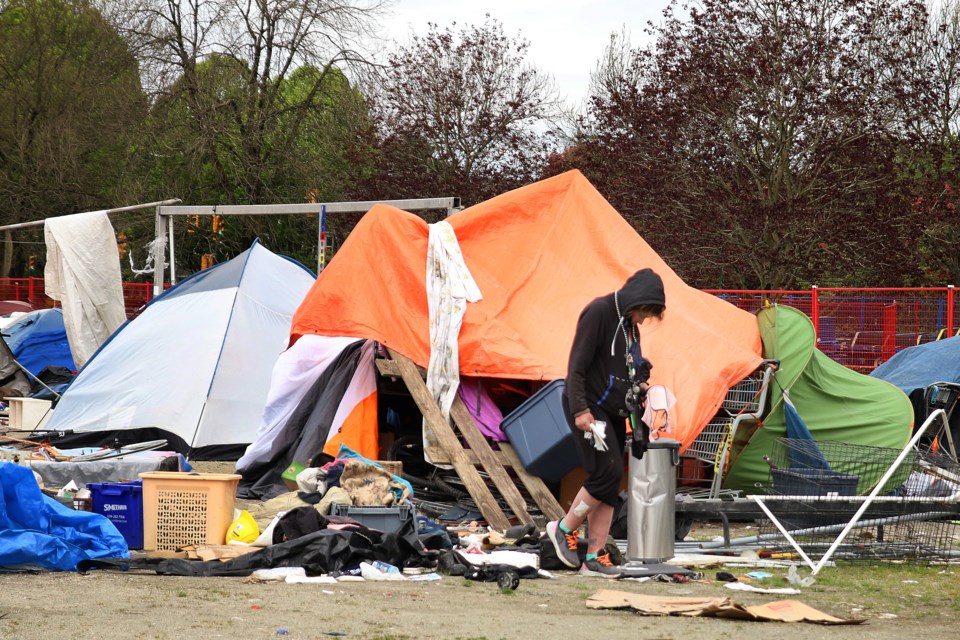 The Strathcona Park encampment was set up in June 2020. Photo Rob Kruyt/BIV News

Former tent city resident Brent Corkum, who was offered a place to live last week in a building in Chinatown, said he’s heard from people in the camp who won’t leave.

Whether that occurs will not be known until the population dwindles in the days ahead. If some people refuse to pack up, a court injunction could be sought to have police move in and clear the encampment.

Donnie Rosa, the general manager of the park board, has the authority to seek the injunction. She told Glacier Media Tuesday that she hoped she wouldn’t have to take that step.

“At the end of the day, if people are still here, we’ll have to weigh that as a possibility,” said Rosa as she left the encampment. “But right now, we’re really working towards bringing people indoors.”

Since it was set up last June, the encampment has been a source of community unrest in Strathcona, where complaints of crime and street disorder have been voiced to city council, police and park board commissioners.

Police have responded to the camp for calls related to violence, overdose deaths and stolen property. A homicide suspect was arrested in February in connection with the murder of a 78-year-old woman.

Several fires, including one Tuesday, have also occurred and there have been confrontations in the park and neighbourhood between residents and campers.

Dan Jackson, president of the Strathcona Residents’ Association, described the 10 months of the camp’s existence as “a long haul” and stressful on residents.

At the same time, he said, residents understand the street disorder and crime associated to the camp is a result of the lack of housing and supports for people.

Now that it seems the encampment is getting closer to being dismantled, Jackson said he was grateful for the efforts of all involved to find housing and shelter for people with an eye on opening up the park again to all users.

“Suddenly, people in government are not only responding to our questions, but genuinely seem focused on trying to solve the problem in a way that’s not just putting people in hotel rooms, but acknowledging that many different people are experiencing homelessness and they have different kinds of needs — and trying to satisfy those needs,” Jackson said.

“Who knows what will actually shake out in a couple of months, but I’m impressed and grateful at whoever is behind the scenes, and at all levels of government for taking the reins on this.”

Meanwhile, Ehret is taking the change to his life in stride.

“I’m grateful, but my housing is temporary, so technically I’m still homeless,” he said, adding that he has been close to tears in recent days in seeing people leave the park.

“You just don’t walk away from 300 people and say, ‘Have a nice life.’ This place has meant a lot to people.”