Work to reclaim oil and gas sites in B.C. is exceeding new drilling due to provincial regulations and an injection of federal money, the PRRD heard last week
Jun 15, 2021 1:53 PM By: Tom Summer 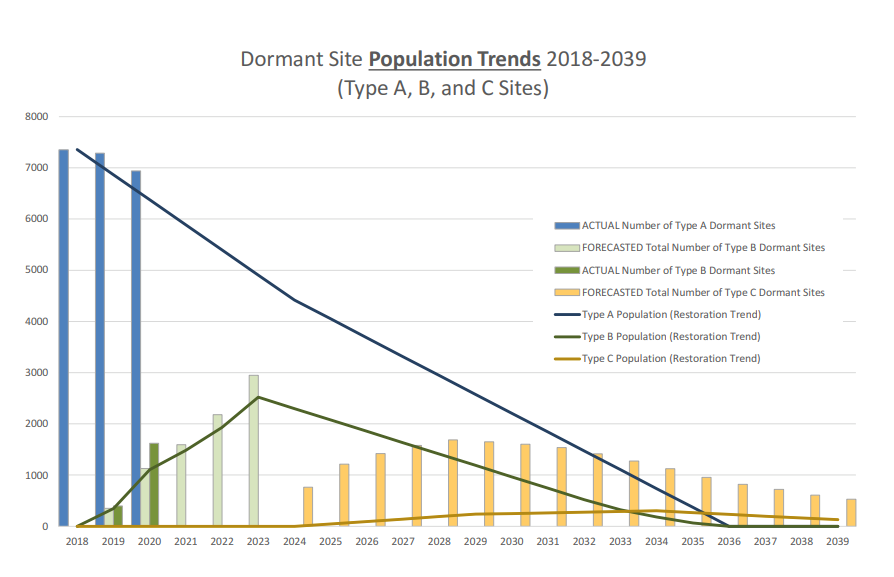 Work to reclaim oil and gas sites in B.C. is exceeding new drilling due to provincial regulations and an injection of federal money, the PRRD heard last week.

BC Oil and Gas Commissioner Paul Jeakins gave the regional district board an update and forecast on industry activity on June 11, showing decommissioning or restoration work on almost 400 orphan sites last year, with more than 250 sites targeted for cleanup this year.

The OGC manages 770 orphan sites, 128 of which have been reclaimed. Restoration activity is planned for another nearly 2,000 dormant sites in 2021 and 2022, according to OGC trends and forecasts presented to the board.

“Industry’s got a big role and a lot of activity in this space,” Jeakins said.

“B.C. will ensure that industry will be restoring sites as they develop new areas. We can now track planned restoration by company and start to predict how that’s going to play out over time.” 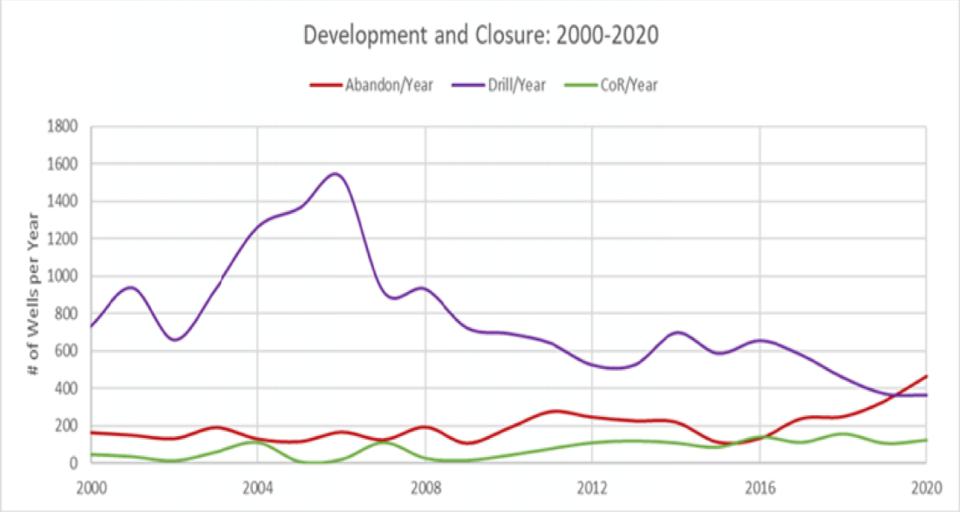 The OGC has set 10-year reclamation timelines for wells under its care, with plans to shorten that where possible, Jeakins said.

“Naturally we’re going to make every effort to reduce that timeline, and staff are busy working on what that could look like,” Jeakins said. “It’s a combination of crews, money, scheduling, there’s a lot of that going on.”

Director Dan Rose (Area E) asked Jeakins what tools the OGC is using to keep reclamation work on target. Jeakins said regulation and enforcement are key, but added that companies have also increased their programs and taken advantage of federal stimulus too. 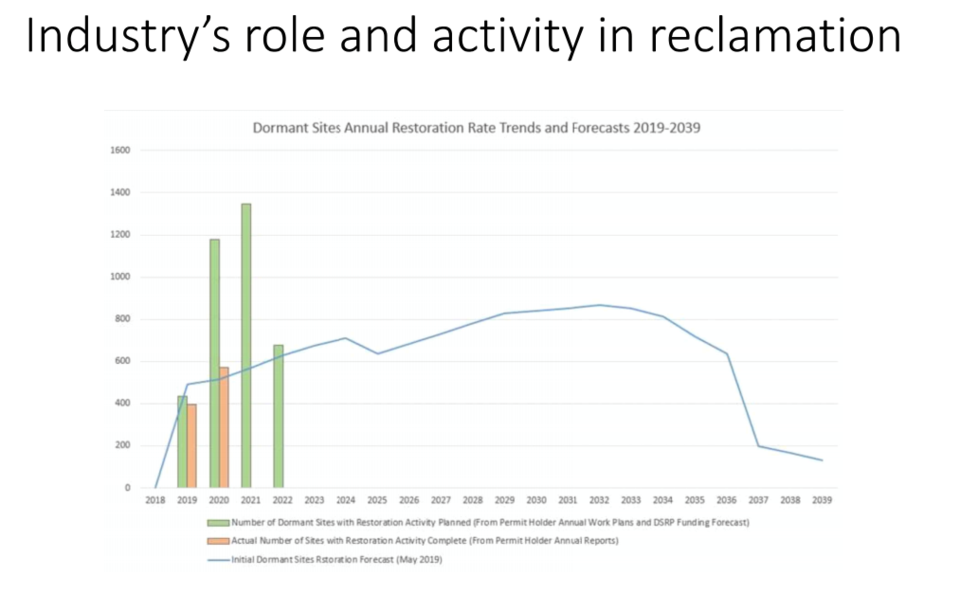 B.C. industry role in oil and gas reclamation activity. By BC Oil and Gas Commission

There were 370 wells drilled in B.C. in 2020, with 580 well applications expected this year. At the end of April, about 178 wells had already been drilled this year.

“Production started fairly slowly but increased steadily, and now it’s at or above last year’s levels," said Jeakins, adding producers have switched focus from liquids to dry gas. “There was a lot going on. It was surprising for us in terms of what we anticipated through the pandemic. But certainly we've seen that the numbers have stayed pretty high.”

Current gas production is around 6 billion cubic feet per day, which is expected to grow to 8bcf per day when the first phase of LNG Canada comes online, Jeakins said.

“The interesting story in that is the number of wells needed,” said Jeakins, noting up to 30 wells can be placed on a pad.

Jeakins said a six-hectare pad averages about 16 wells, meaning about 130 hectares of land disturbance given drilling numbers. He noted one company is applying to double the number of wells on one of its pads, from 18 to 36.

"With the improvements in technology, there's fewer wells needed than we would have expected even a couple of years ago. Plus, the Montney is a world-class natural gas formation so that's a really good thing for B.C.,” he said.

“As you see the reclamation go up, I think B.C. has a pretty good story to tell about how we’re managing this,” he said. 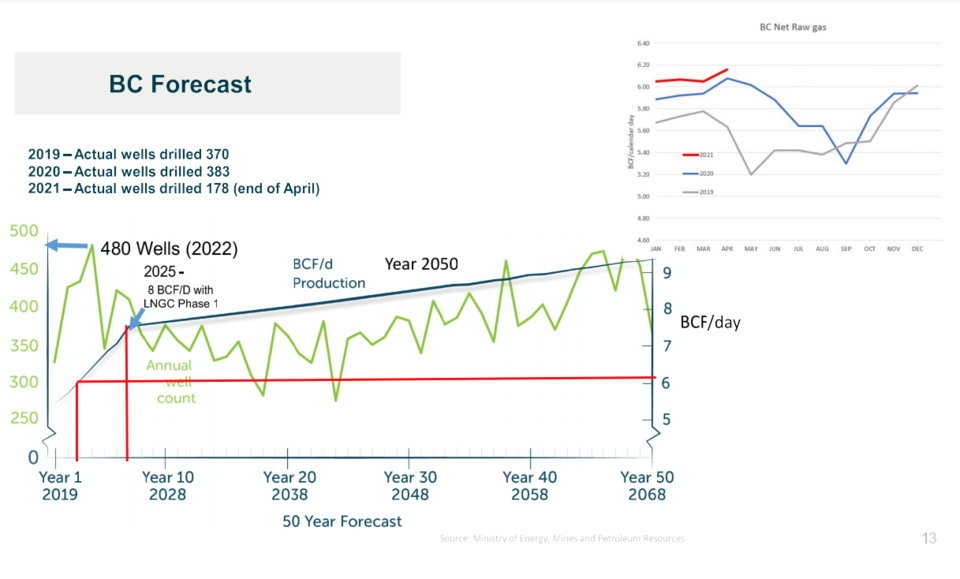 B.C. oil and gas production forecast. By BC Oil and Gas Commission

Jeakins said producers are still focused in the Montney basin despite the shift from liquids to dry gas, which has not translated to more activity in the Northern Rockies and the Horn River and Liard basins, he said.

"We haven't seen that move up. There's a big number of other issues for those before they're ready to come onstream. Montney is the focus," Jeakins said in response to question about the shift from Taylor Mayor Rob Fraser.

"As to why they're switching, a lot of the condensate was going to the oilsands, so I’m not sure whether the slower production up there had anything to do with it. That’s just what we’ve seen and observed."

Jeakins also noted that Coastal Gaslink is scheduled to come online by 2025. Ripple effects can be expected for the upstream work related to the pipeline and LNG Canada project, he said.

“We’re working with companies right now in terms of what that is going to look like, how much activity, and when they think it’s going to happen,” said Jeakins.

"Coastal is just one more focus on the Montney region that will certainly drive additional activity in the next year or two as companies start to ramp up to provide another 25% of the production that they have," he said. "It's certainly very positive for the industry."