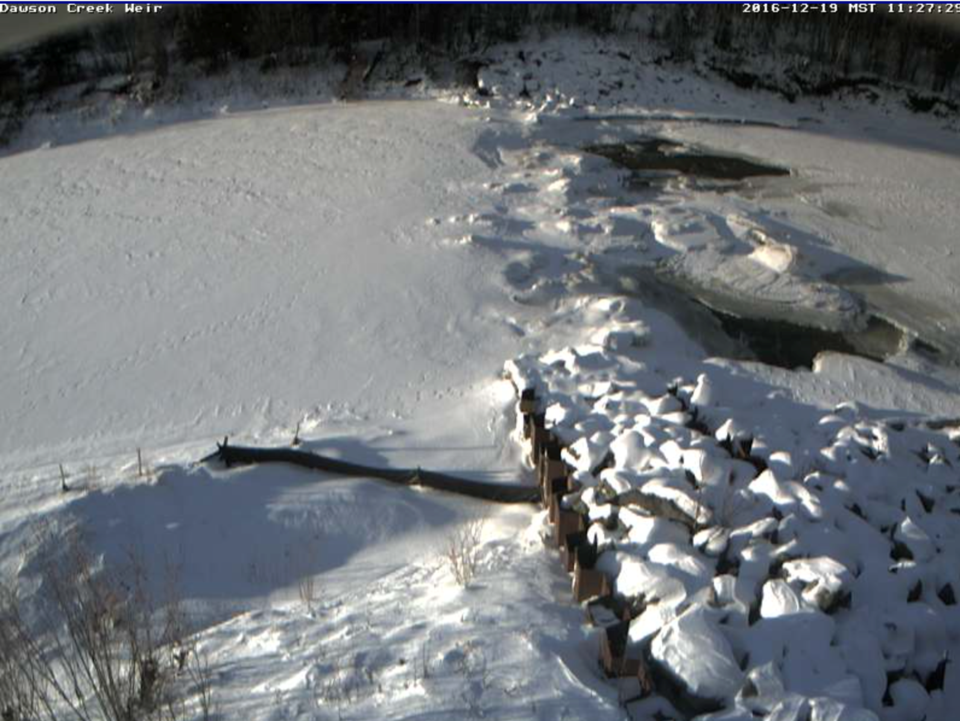 A screen capture of the city's live feed of the Arras weir on the Kiskatinaw River. Watershed technicians with the city of Dawson Creek say the river's watershed got a badly-needed "recharge" thanks to heavy rains this summer.Jonny Wakefield

Heavy rains drenched crops, washed out roads and flooded more than one hundred homes in Dawson Creek this summer. But watershed staff with the City of Dawson Creek say there was a bright spot in all the storms.

Shawn Dahlen, Dawson Creek’s director of infrastructure, said winter water levels on the Kiskatinaw River are as high as he’s seen them in 17 years with the city.

The Kiskatinaw, the city’s water source, has its headwaters at Bearhole lake just east of Tumbler Ridge. Watershed staff control levels on the river through a series of weirs, including at the water intake near Arras.

Most years, it’s a struggle to keep the river flow level with the weir during the winter, Dahlen said. In some cases, it requires releasing water from Bearhole lake.

That hasn’t been necessary this winter, though.

“We’re still over a foot of water over the weir at Arras right now, which is wonderful,” he said. “It means we’ve had a great recharge in our watershed.”

The replenished groundwater is good news for the region, which has experienced droughts with increasing frequency.

Groundwater runoff has kept water levels high both at the lake and in the watershed as a whole, which covers an area the size of Paris, France.

Dahlen said he expected to have full stats on watershed levels in the new year.