For Cst. Curtis Quanstrom, being a police officer is his dream career, one that’s afforded him the opportunity to become a part of the K9 Unit.
Apr 9, 2021 10:11 AM By: Tom Summer 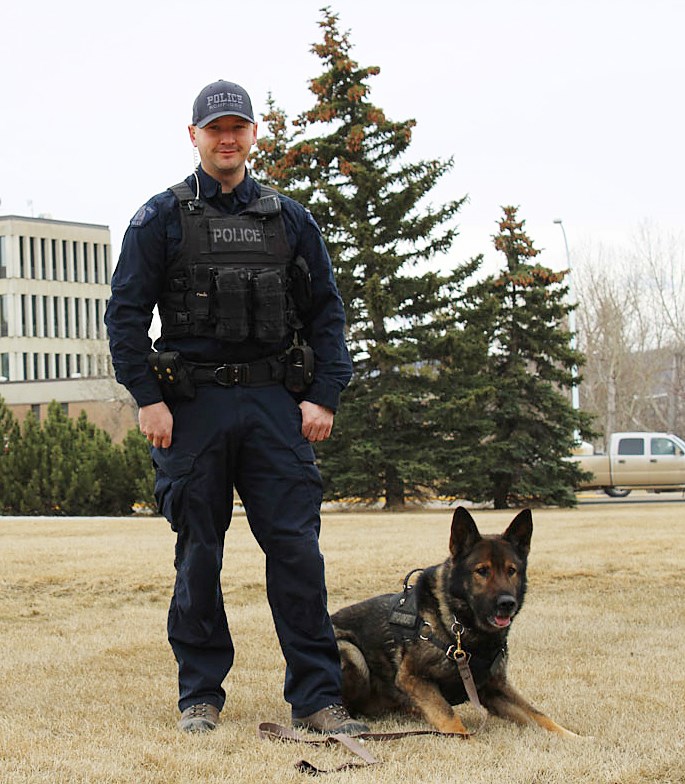 Taking a bite out of crime.

For Cst. Curtis Quanstrom, being a police officer is his dream career, one that’s afforded him the opportunity to become a part of the K9 Unit. He currently works as Dawson Creek’s dog handler, with his four-legged companion ‘Hamer’.

While pronounced 'Hammer' his partner's name is spelled with one M only - Hamer.

Quanstrom was sent to Trail for his first assignment, spending ten years there, learning the trade from another RCMP dog handler.

“I was 22 when I went to depot, since high school it was a dream of mine to be a police officer,” said Quanstrom. “It’s a very competitive process to become a dog handler, I did it for seven years.”

“It’s a very intense course. 85 days of training with dogs every day, but I had a blast,” he said, noting he was posted to the Lower Mainland not long after, working for five years in their dog services.

Hamer is primarily a bomb sniffing dog, trained to seek out explosives, and has been Quanstrom’s partner since 2018. The canine is also trained to find missing people, and uses different harnesses depending on the task.

“I love working with dogs. He works so hard, he loves it. That’s the best part."

Hamer has a very friendly temperament, much a like puppy, noted Quanstrom, adding that his partner is turning six this year.

“We raise the puppies until they’re about 13 months old, and then they’re paired up with the handler at that point. We start imprinting them on tracking, and a big thing is getting them used to buildings, typically they’re outside dogs.”

He added that Dawson Creek is a natural fit, and feels closer in scale to his hometown of Hope.

“I’m a small town kind of guy, so when a posting came up, I jumped right on it. I love the outdoors, and the people here have been amazing, super friendly.”