A total of 108 people counted in March as homeless in Vancouver said they served in the army, navy, air force, RCMP or a foreign armed force. 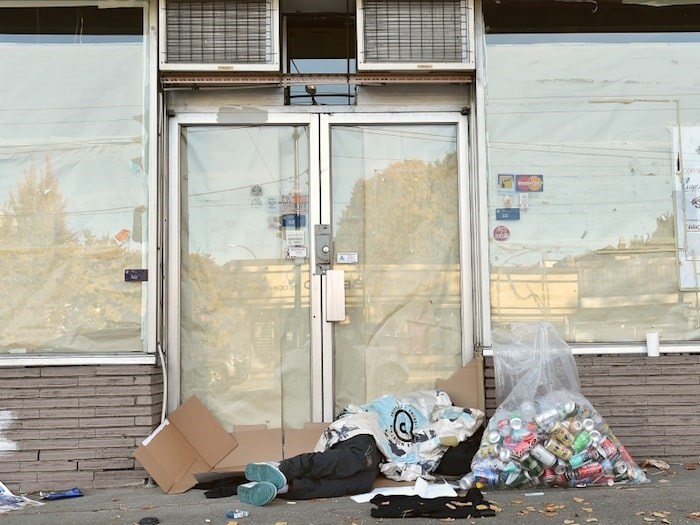 A new report posted on the City of Vancouver’s website says 108 people of 2,223 counted in March homeless count are military or RCMP veterans. Photo Dan Toulgoet

Some news to share on the city’s March homeless count…

A total of 108 people counted as homeless in March said they served in the army, navy, air force, RCMP or a foreign armed force before they ended up on the street or in a shelter.

The numbers could be higher because only 1,226 people responded to the survey that volunteers conducted when they approached 2,223 homeless people during the 24-hour count.

The statistics, which were not available for public release when the city presented its preliminary findings in June, do not break down exactly where the person served, or for how long.

But the report, which was recently posted on the city’s website, said 52 were counted in shelters and 56 were considered unsheltered, which includes people who were staying in a vehicle, or sleeping on someone’s couch.

A total of 17 said they had served in a force outside Canada.

The report, which provides further detail on city staff’s presentation to council in June, was prepared by the Homelessness Services Association of B.C., the B.C. Non-Profit Housing Association and Urban Matters CCC.

Back in 2016, I wrote a story about the city’s move to start tracking the number of homeless veterans during the annual homeless counts.

At that time, I reported 127 homeless veterans were counted in Vancouver during that year’s count. In the 2015 count, 95 people said they had served in the Canadian Forces.

The city began asking whether a homeless person had served in the military because data from communities across Canada suggested that a small but consistent number of veterans were homeless.

Tim Kerr, director of the Veterans Priority Program Secretariat at Veterans Affairs Canada, told me at the time the agency was developing a strategy to better find and track the country’s homeless veterans.

One government study, he said, identified an estimated 2,950 homeless veterans staying in shelters across the country. No information was available on where they served, or how old they were.

Now to some other data in the new report...

As long as I’ve been writing about the city’s count, readers and others have always been curious how many people counted as homeless came to Vancouver from other parts of the country.

In the story I wrote in June, I reported that a total of 81 per cent of 1,183 homeless people who agreed to a survey said they were living in Vancouver when they lost their home.

Of the 19 per cent who weren’t living in Vancouver, 41 were from elsewhere in Metro Vancouver, 72 in other parts of B.C. and 70 from outside of B.C.

The new report gives further detail on this area. 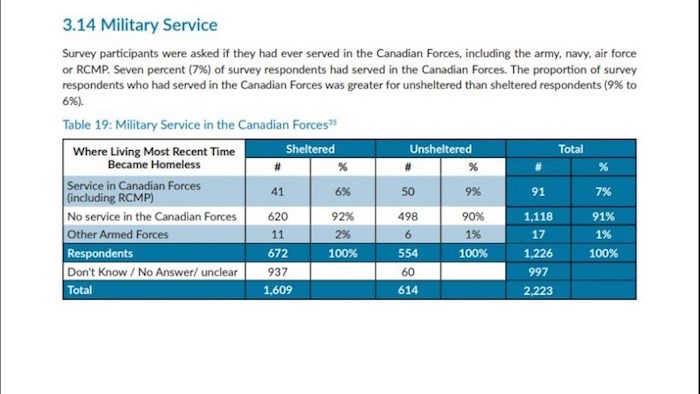 New details regarding city’s homeless count contained in a report posted on City of Vancouver’s website.

Of 979 people who were polled about where they lived prior to coming to Vancouver and becoming homeless, the statistics are as follows: 89 from outside of Canada, 156 from elsewhere in Metro Vancouver, 299 from the rest of B.C. and 435 from the rest of Canada.

Which is interesting information — even more interesting when you match up the data with 976 respondents saying they lived in Vancouver for more than one year before losing their accommodation.

The report doesn’t say for how many years, although 146 of those 976 people said they lived in Vancouver all their lives before becoming homeless.

The 2,223 people counted as homeless in March was a record-breaking statistic. In 2005, the homeless population in Vancouver was recorded at 1,364, the lowest it’s been in the past 12 years.

The new report can be viewed here.