Tuesday’s provincial budget does too little to mitigate and prepare for increasingly damaging floods across B.C., an engineer who specializes in flood planning says.
Feb 22, 2017 6:45 PM By: Jonny Wakefield 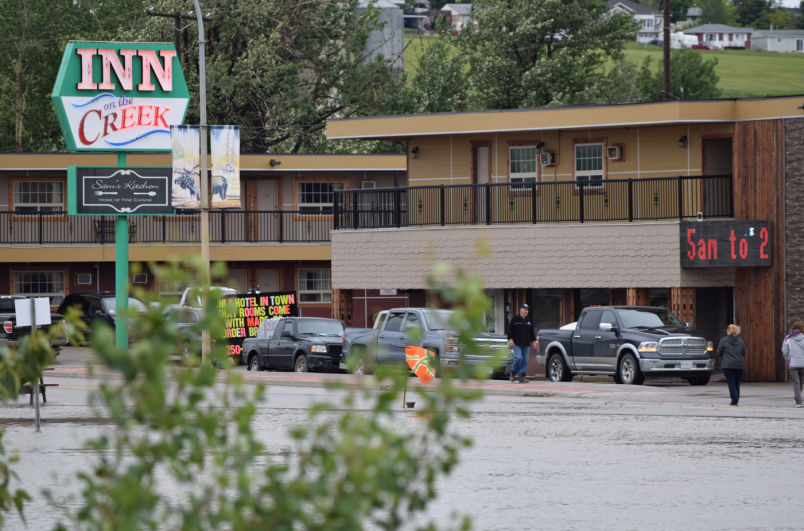 Flash flooding last summer damaged roads and homes across the South Peace. A flood expert says there’s not enough in the 2017 provincial budget to plan for the next round of floods.

Tuesday’s provincial budget does too little to mitigate and prepare for increasingly damaging floods across B.C., an engineer who specializes in flood planning says.

Tamsin Lyle, principal at Vancouver-based flood management consultancy Ebbwater, said the 2017 provincial budget offers little to no new funding to prepare for floods, despite an increase in intensity and frequency across the province.

“It’s a stay the course budget on flooding, and we know that no longer (works),” she said.

Floodwaters cut Dawson Creek in half in June, with dozens of homes along the creek experiencing damage. The waters cut off several rural communities that had to be resupplied by helicopter.

Lyle, who followed the Dawson Creek floods, said it’s the same story across B.C. as the province begins to feel the effects of climate change.

“In some places that means sea level rise, in other places it means small creeks (flood), in others it means big mountain creeks and debris flows,” she said. “I like to describe it as the world getting a bit angrier. We’re getting up on the anger spectrum, so we’re getting more of those flash flood events.”

Despite that, the province has passed flood preparedness onto municipalities. “Essentially, it’s all now dealt with by municipal governments—or, not dealt with because they don’t have the capacity,” Lyle said.

15th Street has been replaced with a bridge, which the city hopes will handle floods better than the culvert system that washed out in the high waters. The ministry of transportation says it is studying whether to replace 8th Street and Snake Pit Road with bridges.

Beyond that, Bumstead said the city is trying to answer a number of questions about flood preparedness.

“Are we seeing a change in that flooding pattern, and the frequency and severity of the flooding?” he said. “And should we be looking at that for how we’re allowing development within the creek corridor (which) traditionally was fine and outside the flood area?”

“We have no data to indicate that’s an issue, but I think that’s a conversation we have to have,” he added. “To me, first is get the infrastructure done, and get the bridges in place to reduce that impact.”

In an email, a spokesperson for Emergency Management BC said the 2017 budget includes no new funding for flood management. However, the province announced $65 million in flood preparedness and mitigation funds in 2016, and reimbursed around $31 million to Peace Region communities in the wake of the flood. The province is also spending around $2.5 million to reroute and clean up South Peace streams.

Lyle said that while the province responds effectively after floods, too little is done to prepare ahead of time.

“They’ve got all these groups all over these different ministries, and they’re not talking to each other consistently,” she said. “The money is being spent in response…and it seems to me they’re doing pretty well there. But it would be better if we didn’t have to respond in the first place. That connection’s not being made.”