When the federal government announced June 6 it would be granting a travel exemption to whichever team won the second round series between the Montreal Canadiens and Winnipeg Jets to play games in the United States, and to have their opponent travel
Jun 10, 2021 12:16 PM By: Dillon Giancola 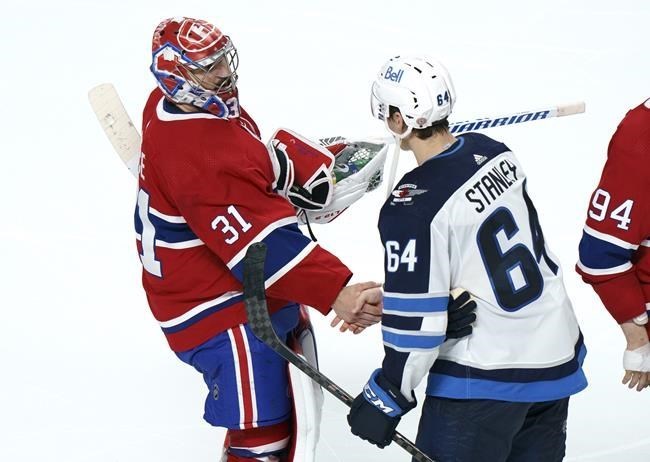 When the federal government announced June 6 it would be granting a travel exemption to whichever team won the second round series between the Montreal Canadiens and Winnipeg Jets to play games in the United States, and to have their opponent travel to Canada, it was met with both relief and frustration.

Relief in that it was the first time the government had granted any kind of exemption to professional athletes — at least when it came to crossing the border and hosting international opponents — and it's hopefully a sign of the return to normalcy to come. Frustration, however, in that other Canadian teams and athletes —most notably the Toronto Blue Jays — aren't receiving the same grace.

The Blue Jays have played abroad now for parts of two seasons, with some new additions to the team, such as George Springer, having yet to make Toronto their home. The team is living out of hotels, first in Dunedin, Florida, and now in Buffalo, New York, without the relief that the end of a road trip usually brings.

I'm glad the Canadiens will be able to travel back and forth to the U.S. for their third round series against either the Vegas Golden Knights or Colorado Avalanche without having to quarantine for two weeks, mostly because I want to watch the Stanley Cup Playoffs without a massive delay between Games 2 and 3. But it's also good for the Habs because, though they are already at a huge disadvantage playing a team on the road with a near full capacity in its arena without having the same benefit at home, it's still a much better scenario than playing all the games in Colorado, for example, or a neutral American city with no affiliation to the Habs altogether.

So this is where we stand — steps are being taken to move closer to normal, but locally and internationally, but there's still much that needs to be done. I'm glad motocross fans can race here at home, but they can't go attend a race just two hours away in Grande Prairie. Local clubs being able to play games again is one thing, but they are still a long way from being able to have enough fans at games to make the revenue needed to survive.

I'm not going to sit here and complain about millionaire athletes not being able to have the comfort of their own home for a period of time, but as a fan, it also impacts their ability to attract new, star players and get into a rhythm. This affects the NHL as well — the Edmonton Oilers have enough problems convincing guys to sign with them as it is, the last thing they need is to have another season where players have to quarantine every time they enter Canada as well.

The Tokyo Olympics are just months away, and athletes in all sports are frantically finishing up the qualifying period. However, our Olympic athletes are still having to quarantine after they return home from competing abroad, and it's not hard to see this hurting both their efforts in qualifying, but also at the Games themselves. We already have a hard enough time as it is competing at the summer Olympics, I don't need our row teams failing miserably because they're out of shape or couldn't get the practice they needed in their hotel rooms.

There's also no exemptions being made for people who have been partially or fully vaccinated, whether you're a pro athlete, or just an amateur or recreational slow pitch player. I'm no expert on that subject, but since the government is encouraging us to get vaccinated the least they could do is make it easier for us to play sports.

Unlike NHLers, other athletes not getting border exemption from Canadian government
Jun 8, 2021 9:07 AM