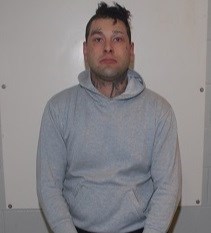 The Chetwynd RCMP are requesting the public’s help in locating a man who escaped lawful custody.

On March 19, 2021 Devon Myles Lindstrom, 27, years old, was arrested for a domestic assault, mischief under $5000, assault with a weapon, assault causing bodily harm and intimidation. He was remanded into custody on a 24 hour curfew with an electronic monitoring device.

On Friday, April 30, 2021, it is believed that Lindstrom cut off his electronic monitoring device and therefore has escaped lawful custody while in Prince George. It is believed that Lindstrom may be in the company of another man and woman, possibly in 2015 Grey four door Chrysler Sedan car with British Columbia license plate LE985E or a 2015 White Honda Civic British Columbia license plate.

There is information that the trio could be travelling between somewhere Prince George and Vancouver Island.

Devon Myles Lindstrom is described as: Indigenous male 183 cm (6’) 85 kg (187 lbs) Brown hair Brown eyes Athletic build If located, contact the RCMP or the police of jurisdiction in your area.

Do not confront Devon Myles Lindstrom or anyone he may be in the company of.