Logan Power’s father shocked to learn B.C. families not entitled to pain and suffering compensation for lost child
Feb 10, 2017 11:41 AM By: Jonny Wakefield 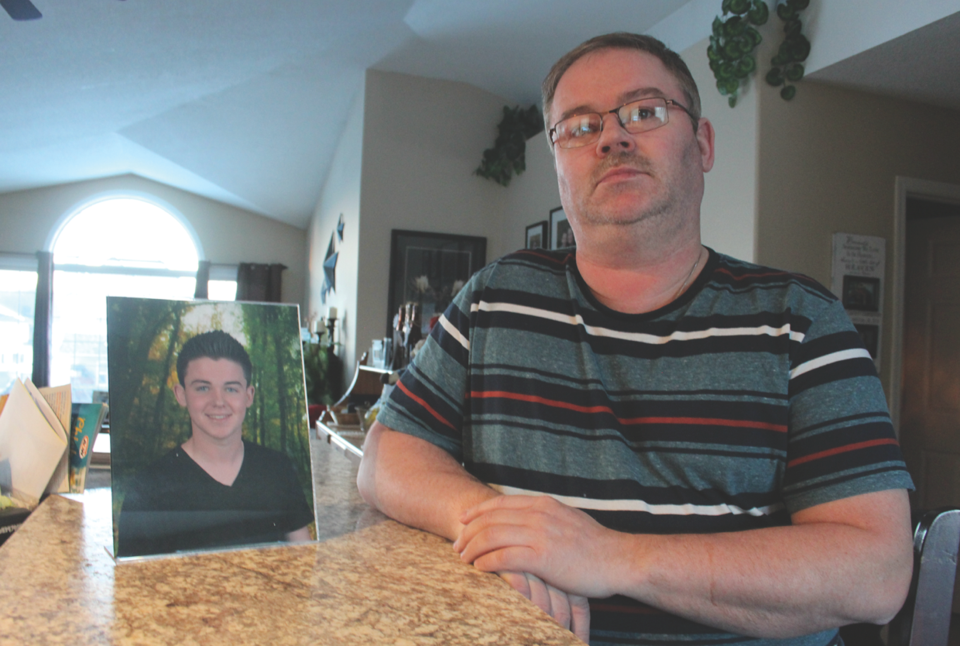 Terry Power was shocked to learn his family is not entitled to pain and suffering costs after his son Logan was killed by an alleged drunk driver last fall. Now, he’s pushing the province to change the Family Compensation Act.Jonny Wakefield

Logan Power was a young man with his life ahead of him.

A Grade-12 honours student at Dawson Creek Secondary, Power was finishing his school career and getting ready for the rest of his life. He was well-liked by his classmates, had a number of college credits under his belt and was preparing for a career in power engineering in the oilfield.

Then, on Sept. 9, Power was killed by an alleged drunk driver.

“That was the first day of the rest of his life, and then that happened,” said Terry Power, his father. “We were totally robbed. He was my only son.”

Nearly six months later, Power’s grief has turned to anger over what he says are unjust wrongful death laws in British Columbia.

Shortly after his son’s death, a lawyer told Power that because Logan was a dependent, the family is not entitled to pain and suffering costs.

That left the family with nearly $20,000 in funeral costs and little help from the government or ICBC, the Crown insurance provider.

A legal advocate says the Power family is not alone in being blind-sided by B.C.’s wrongful death laws.

Don Renaud, a lawyer who represents the B.C. Wrongful Death Law Reform Society, said that unlike other Canadian provinces, B.C. families are entitled to “virtually nothing” if a dependent is killed.

For 15 years, Renaud has helped a group of families push the province to change the Family Compensation Act, which lays out the damages survivors can seek if a loved one is wrongfully killed. A personal injury lawyer, Renaud believes the act should reflect the pain suffered by dependents’ families.

“People don’t understand this problem exists until it affects them personally,” he said. “If the public only knew the state of the law is the way it is, they’d be outraged.”

Power was killed while riding with an alleged drunk driver on the Dangerous Goods Route near Dawson Creek. He was the only passenger killed when the vehicle rolled in a ditch along the road. Power said charges against the driver have yet to be approved.

Had he been injured, Power and his family would have been entitled to pain and suffering costs, an idea which Renaud said strikes him as paradoxical.

“Most people think ‘well, death is the worst thing, and there must be a bigger pot of money available,’” he said. “That’s not the situation unless it’s a breadwinner who’s killed.”

If a breadwinner is killed, survivors can sue ICBC for financial support that person would have provided over a lifetime.

“If you’re a dependent—and in our society, that means children, seniors or the disabled—their lives have no value,” Renaud said. “Shocking as that is, that’s the way it is.”

A ministry of justice spokesperson said the act specifically covers financial losses, and that government is not considering changing the legislation.

“Damages that can be claimed by eligible family members are financial losses,” a ministry statement reads. “This includes the loss of financial support that a spouse, child or parent would have received from the person who was wrongfully killed.”

In an email, ICBC said the Family Compensation Act is provincial legislation that does not fall under its jurisdiction.

“Although the Act does not allow for compensation regarding pain and suffering, it does allow for other types of compensation,” the spokesperson wrote. “Additionally, whenever a death occurs as a result of a crash, ICBC accident benefits coverage includes death benefits and payments toward funeral expenses.”

That’s been cold comfort for Power, who is focused on connecting with other families who have run up against a wall after the death of a child.

“There’s too many kids like Logan that are just thrown out as worthless,” he said. “If people are hurt, they’re compensated. Well you know what? You don’t have to be in an accident to be hurt.”