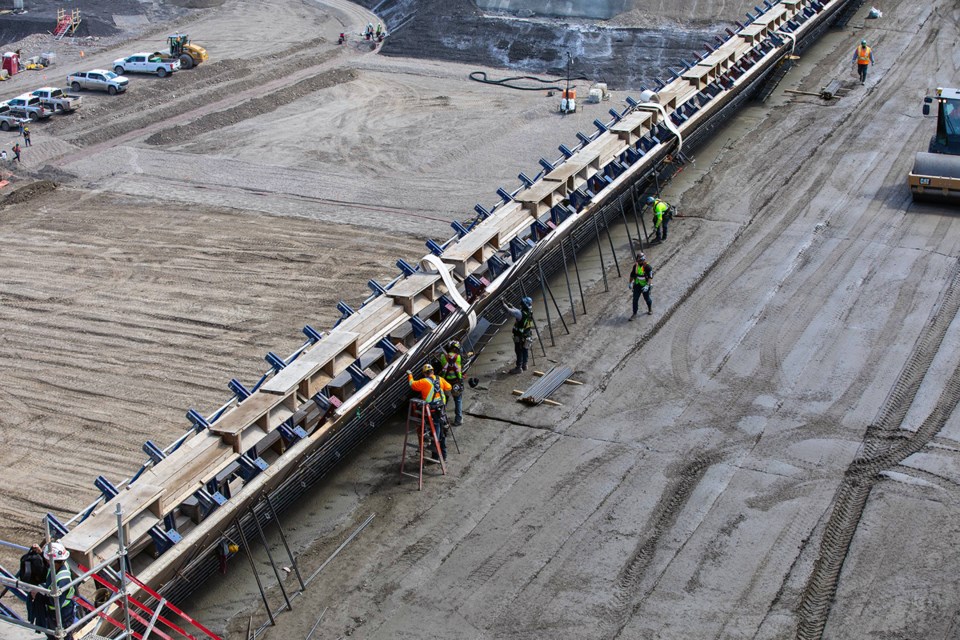 Installation of reinforcing steel on the south face of the roller-compacted concrete dam and core surface, May 2021.BC Hydro

Northeast B.C. posted an unemployment rate of 4.5% in May, the lowest in the province for the 11th consecutive month.

There were 38,600 employed and 1,800 unemployed last month, according to Statistics Canada estimates, a significant improvement from last May, when 4,300 people were without work and unemployment was at 11.1%.

Month-over-month from April, employment is down from 39,200 jobs, however, the region continues boast the best employment rates in B.C.: labour force participation is 73.6% while overall employment is at 70.3%.

Resource sectors including forestry, fishing, mining, and oil and gas saw 400 fewer positions last month. Losses were also seen in manufacturing, down 3,800 positions; construction, down 1,200; and agriculture, down 1,800.

Transportation and warehousing saw employment gains of 2,700 positions, while accommodation and food services grew by 1,600 positions.

Provincial unemployment edged down to 7%. The Canadian average is 8.2%. Only Quebec (6.6%) and Saskatchewan (6.3%) have lower rates of unemployment than B.C.

Nationally, the economy lost 68,000 jobs on a monthly basis, adding to a loss of more than 200,000 positions in April. Most of the decline was concentrated in part-time work (-54,200) due to restrictions in provinces such as B.C. and Quebec that disproportionately affect sectors with a high number of part-time workers.

Step 1 of B.C.'s restart plan took effect May 25. The re-opening of indoor dining and other activities is not reflected in the latest job numbers.

The next step in the plan, which could take effect as early as June 15, will lift travel restrictions within B.C., and likely support B.C.'s struggling tourism sector.

— with files from Hayley Woodin/Business in Vancouver