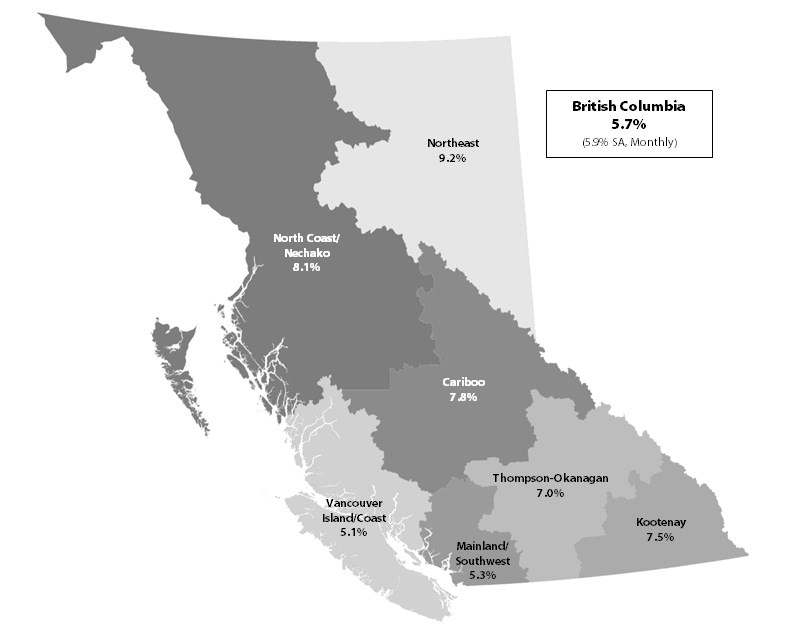 For the fourth month in a row, Northeast B.C. continues to lead the province with an unemployment rate of 9.2 per cent, a sign of the continued struggle after the downturn in oil prices sent shockwaves across the region and Western Canada as a whole.

Data on unemployment rates is released at the beginning of each month, showing the previous month's numbers.

The numbers, released by Statistics Canada on July 8, show a slight decline in the Northeast from the 9.6 per cent reported in May and released in June. But, the average jobless rate in the area still soars above the seasonally-adjusted provincial average of 5.9 per cent. Last June, the regional unemployment rate sat at 6.4 per cent.

It wasn't that long ago when the Peace Region sat at 5.9 per cent itself. That was in May 2015. Before that, in March 2015, the region's unemployment rate was too low to even report because of what Statistics Canada cited as privacy concerns.

Since the price of natural gas is closely tied to that of crude oil, drilling wells in the region that are "upstream" from planned liquefied natural gas export terminals on the coast, have struggled since those prices took a tumble in what some are calling the deepest downturn since the 1990s.

As a region that heavily relies on that industry for jobs, the Northeast has taken a beating.

The North Coast/Nechako regions trail behind the Northeast slightly, with an 8.1 per cent rate of unemployment. The lowest unemployment rate in the province exists in the Lower Mainland/southwest economic region which which the Vancouver metro area.

The full report can be found here.