“Get in, loser, we’re going shopping.”

Name a more cutting one-liner that resonates with the souls of shopaholics than this bittersweet dig from Regina George. Sure, Rachel McAdams’ acerbic delivery as the queen bee of “Mean Girls” has a certain sting to it, but it’s the underlying sentiment (however insidious)—that a little retail therapy can be the panacea for all of life’s problems—that goes a long way.

As our favourite films have taught us, life-changing things can happen during casual trips to the mall with friends (or frenemies); behind dressing rooms, when that outfit wears you perfectly; and even while window-shopping outside Tiffany’s on a quiet morning in New York City. Vivian Ward, Cher Horowitz, and Holly Golightly are just a few of the many movie characters to have undergone major transformations in some of the most memorable shopping scenes in pop culture.

To that end, Giving Assistant compiled a list of 10 films with unforgettable shopping scenes. To be considered, shopping had to play a central part in the scene or the character’s development throughout the movie or a memorable moment had to occur at or within a store where people are shopping. IMDb user scores and Metascores are provided for popular and critical context.

Keep reading to see if your favourite shopping scene made the list. 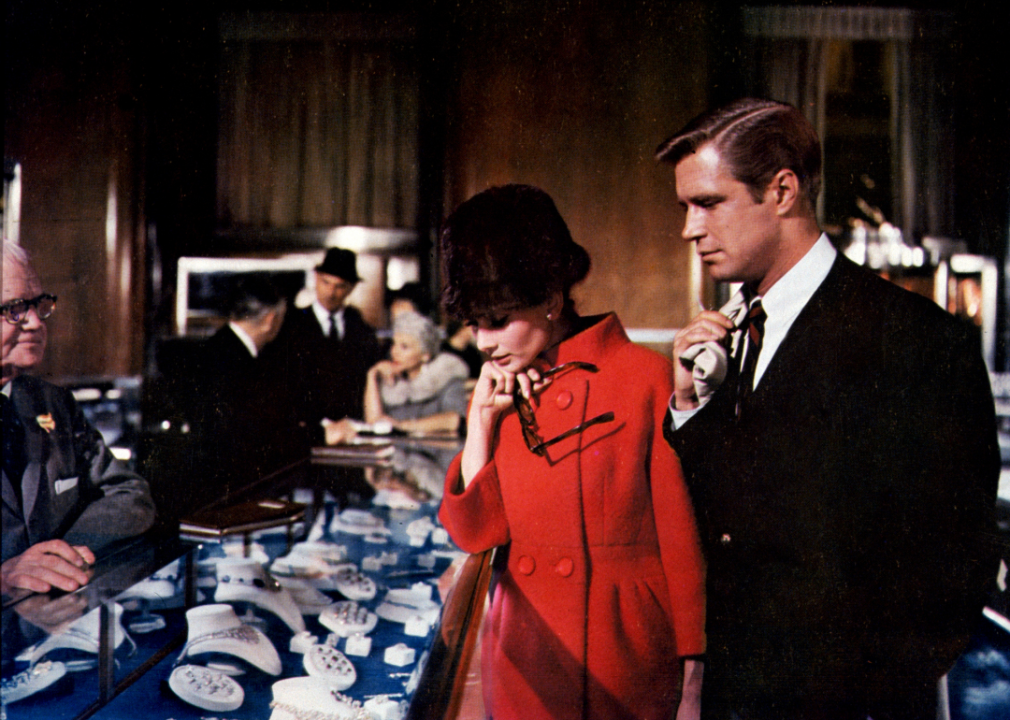 Arguably the most famous shopping scene in cinema belongs to Audrey Hepburn, who opens this classic rom-com in an Oscar-nominated performance as Holly Golightly. Emerging from a taxi in the most celebrated little black dress to grace the silver screen, Holly arrives in front of the Tiffany & Co. flagship store on an unusually quiet morning in New York City.

While enjoying her Danish and coffee, Holly window-shops one of the store’s jewellery displays before catching her reflection in another window that gives way to twinkling chandeliers. For Holly, Tiffany’s represents a place of solace as well as aspiration, perfection, and elegance—the antithesis of her actual lifestyle, which is anything but glamorous. 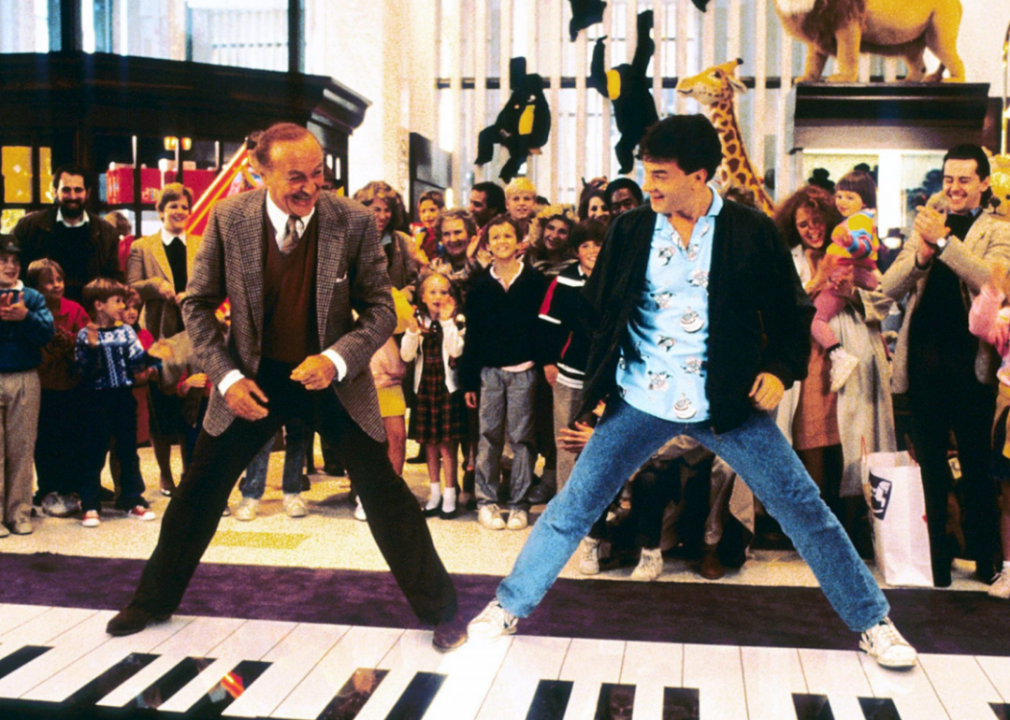 What kid hasn’t experienced the bane of being too short for a carnival ride? Such is the predicament of 12-year-old Joshua Baskin (David Moscow), whose big wish comes true when a fortune-teller machine transforms him into an adult (Tom Hanks) overnight in the 1988 comedy caper “Big.”

Now a grown-up but still a boy at heart, Josh eventually finds himself landing a job at MacMillan Toy Company, home to the giant Walking Piano. It’s on the massive dance-on keyboard where Josh and his boss, Mr. MacMillan, tap into their inner child, treating a crowd of awestruck customers to a playful duet. This iconic moment was shot inside New York’s FAO Schwarz, which became a world-famous tourist attraction for “Big” fans until its fateful closure in 2015. 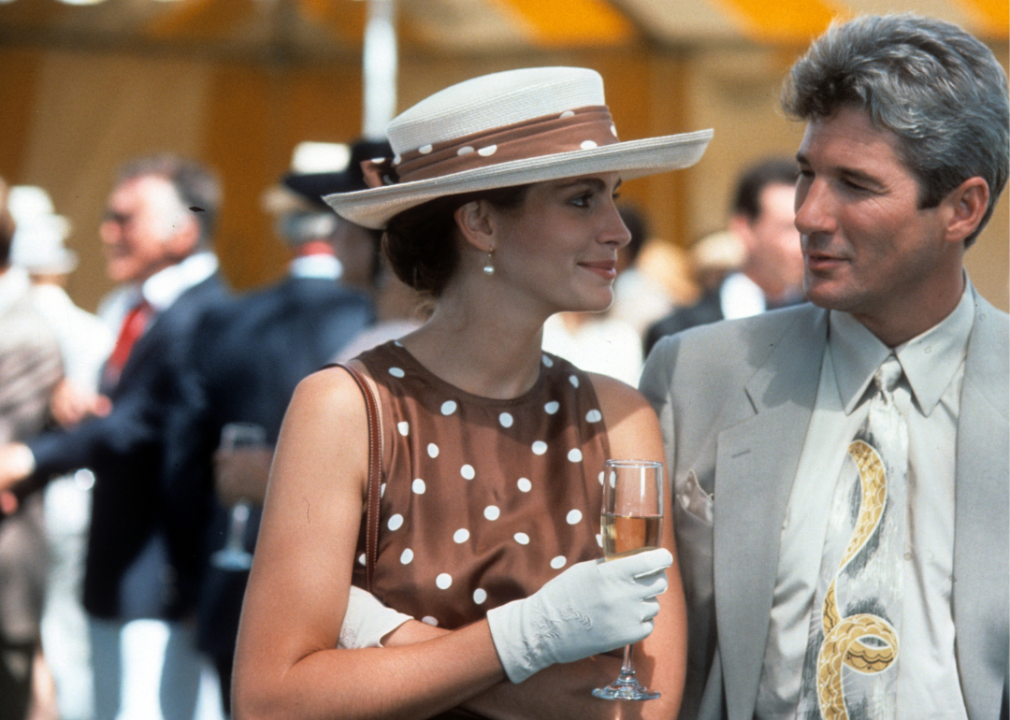 There’s no sweeter revenge than finding the perfect outfit—or two, or three. No one knows this better than Vivian Ward in “Pretty Woman.” After agreeing to be the arm candy for business tycoon Edward (Richard Gere) in exchange for cash and an expensive wardrobe, the street-smart sex worker (Julia Roberts)—sporting a cut-out dress and black boots—gets rudely turned away by smug saleswomen while shopping at a boutique on Rodeo Drive. Big mistake.

After undergoing a lavish makeover, it’s Vivian who gets the last laugh when she returns to the store—decked out from a shopping spree—to rub it in the women’s faces that they missed out on a huge commission. As fulfilling as this moment is in warning against judging women by their appearance, it’s been equally criticized for its sexist undertones. 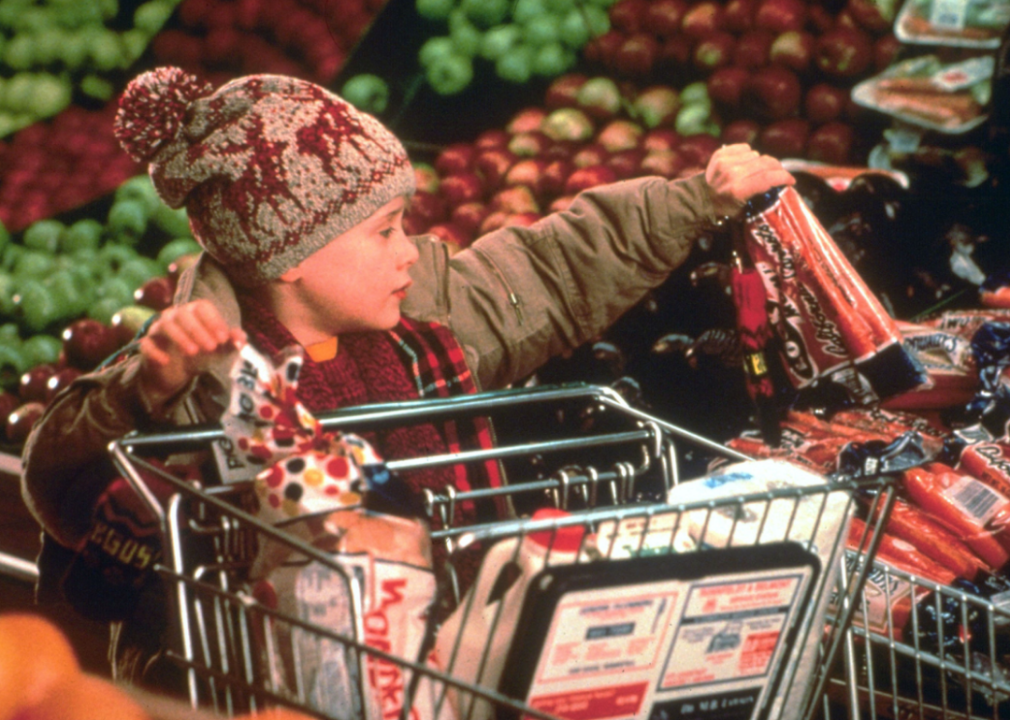 There are two memorable shopping scenes in the holiday classic, “Home Alone.” The first comes when 8-year-old Kevin McCallister (Macaulay Culkin) heads to the store to replace his lost toothbrush—which is lost because his mom packed it for the trip because Kevin “doesn’t know how to pack a suitcase.” As the store clerk tries to find out whether the toothbrush is approved by the American Dental Association per Kevin’s request, Kevin gets spooked by his neighbour—who he believes is the South Bend Shovel Slayer—and runs out without paying. An action-packed police chase through town, including a packed ice-skating rink, follows.

Later, Kevin—settling into his new responsibilities—heads to the supermarket to stock up. With his cart full of household staples and a package of little green army men—“for the kids”—Kevin successfully convinces the suspicious checkout lady his mom is in the car. The scene ends with Kevin walking home only to have the overstuffed plastic grocery bags break.

Both of these scenes were filmed in Winnetka, Illinois. The store where Kevin accidentally shoplifted the toothbrush was a real-life business called Hubbard Woods Pharmacy, and the park Kevin is chased through by police is Hubbard Woods Park. 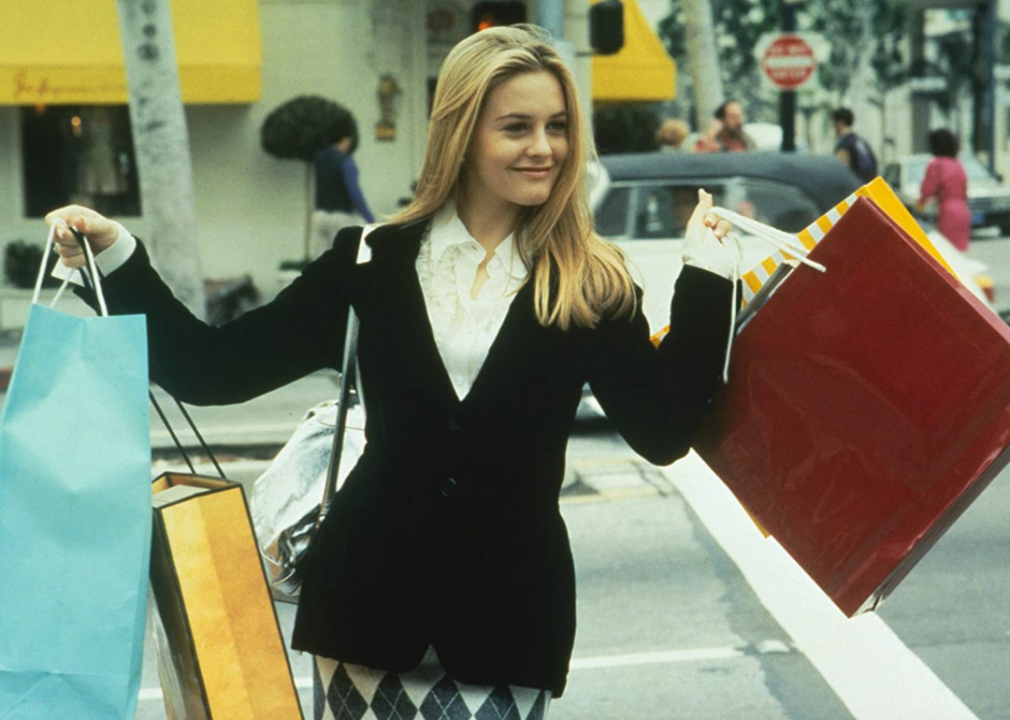 In a revelatory moment from “Clueless”—with a cover of Eric Carmen’s “All by Myself” as the background music—a doubtful Cher Horowitz’s (Alicia Silverstone) ponders her life during a long walk home. As the 16-year-old rues her “totally clueless” intuition about ineligible bachelors in her life, she reexamines her contempt for her college-aged, ex-stepbrother Josh (Paul Rudd) and her friends’ attraction to him.

Naturally, Cher’s inner monologue gets interrupted at the sight of a pretty outfit she spots in a window display, drawing her inside to find one in her size. It’s upon her arrival home, in front of the illuminated water fountain, that Cher makes a startling realization: “Oh my god, I love Josh.” While fans have long debated the appropriateness of Cher and Josh’s romance, Silverstone has said the pair’s relationship is “very unusual, but it’s cool.” 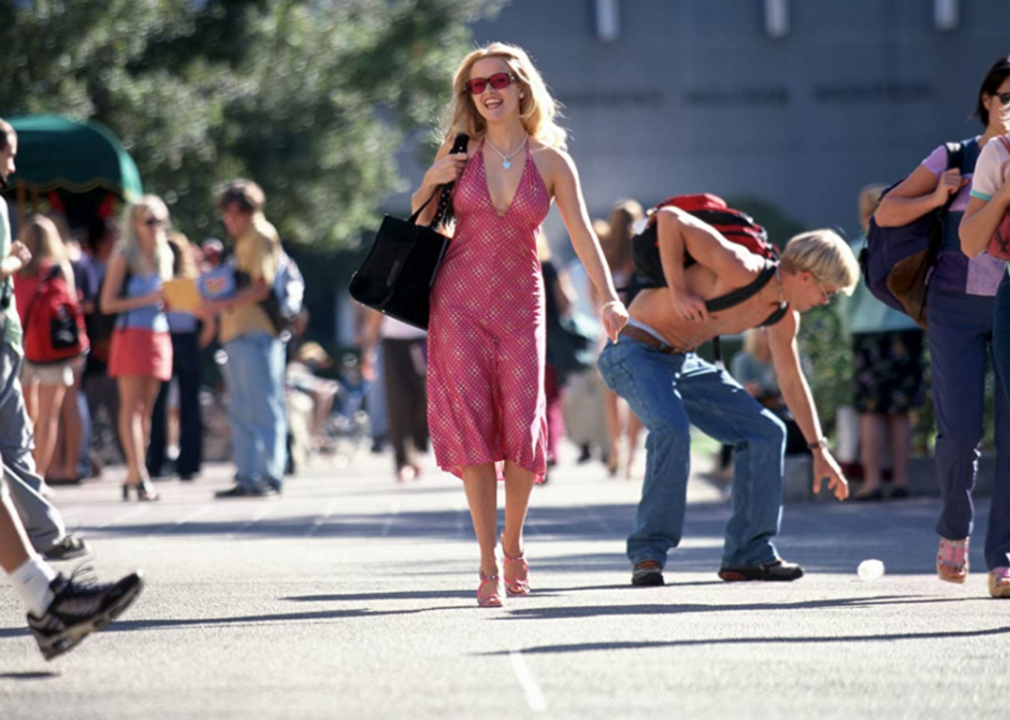 Who could object to this one? When we’re introduced to Reese Witherspoon as Elle Woods in the opening minutes of “Legally Blonde,” the fashion-obsessed sorority president drags her Delta Nu sisters to shop for a new outfit in anticipation of a proposal from her boyfriend Warner. A sly saleswoman at a boutique takes Elle to be a “dumb blonde,” and tries to sell her a marked-down dress as new. Elle retorts with a trick question about the fabric. Cleverly showing off her fashion expertise, she exposes the saleswoman’s scheme by explaining the dress in question was featured in last season’s Vogue.

This moment shows the audience that Elle Woods is someone not to be underestimated—a theme that carries throughout the film as her journey takes her to Harvard Law School, where she continues to defy expectations. If nothing else, this iconic moment certainly won’t let anyone forget that “it’s impossible to use a half-loop topstitching on low-viscosity rayon.”

Fans of the movie—which is based on author Amanda Brown’s real-life experiences at Stanford—might be pleased to know that this scene is also featured in the Tony-nominated Broadway musical adaptation of the film. 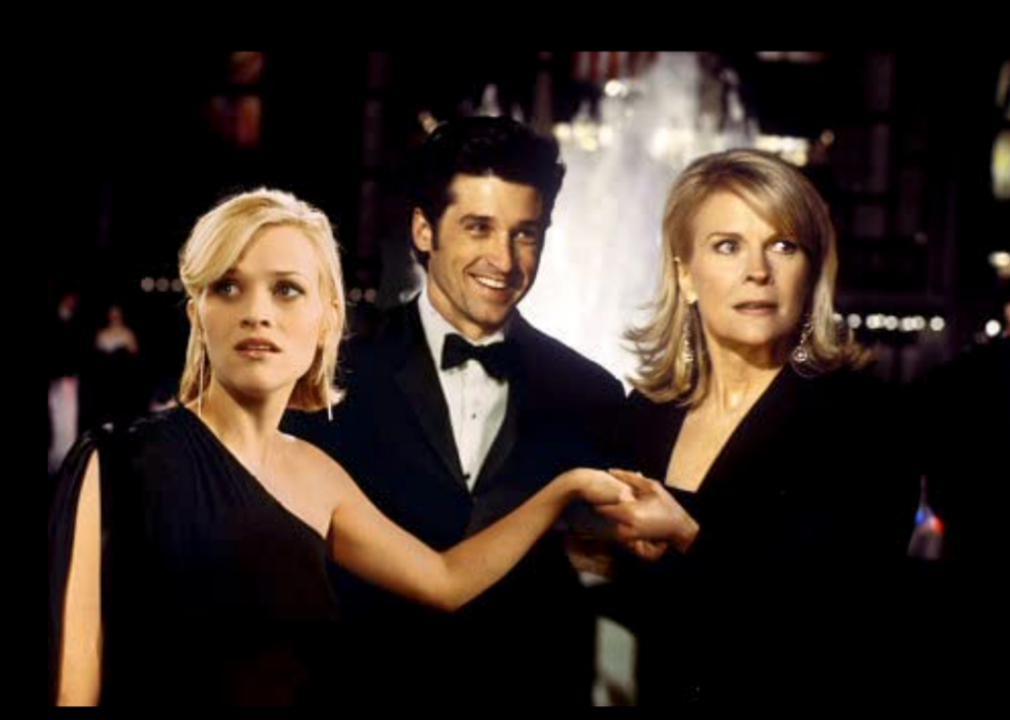 In one of the first scenes in the highly popular rom-com, “Sweet Home Alabama,” Andrew (Patrick Dempsey) leads his girlfriend Melanie (Reese Witherspoon) into a dark room for a surprise. The lights are switched on, revealing they are in a Tiffany’s store, which has been closed to the public for the occasion, leading to an over-the-top but intimate proposal.

It turns out this almost dreamlike scene was actually filmed in the flagship Tiffany’s store in New York City. It was reportedly the first time the jeweller had let any production company film inside the store since 1961’s “Breakfast at Tiffany’s.” Years later in 2015, Witherspoon and Tiffany & Co. famously recreated the iconic proposal scene with a post on Instagram. 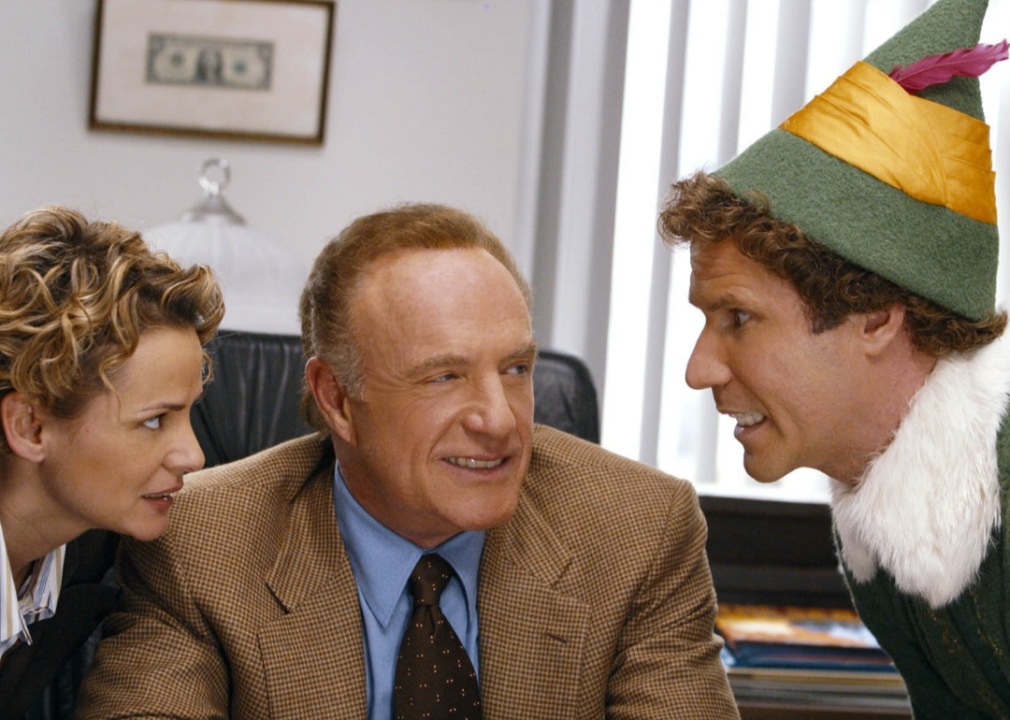 Considered by many to be a modern Christmas classic, “Elf” gifted audiences with what could arguably be one of Will Ferrell’s most lovable characters in Buddy the Elf. When Buddy arrives in Manhattan from the North Pole in search of his father, he finds himself looking up at a sign for Gimbels department store.

Enamored by the holiday decorations adorning the building’s exteriors, he makes his way inside—though not before he is nearly run down by a NYC taxi. The following sequence treats the audience to some great visual gags as Buddy explores the store, including a moment where he awkwardly tries to ride an escalator by stretching his feet apart over several steps as other customers watch in amusement. And who could forget the scene where Buddy is eyeing Santa-themed lingerie—on display next to a sign that reads “the perfect gift for that special someone”—which he later naively sends as a gift to his father.

The real Gimbels store—once known as a competitive rival for Macy’s in its heyday—closed down in 1986, later replaced by the Manhattan Mall. 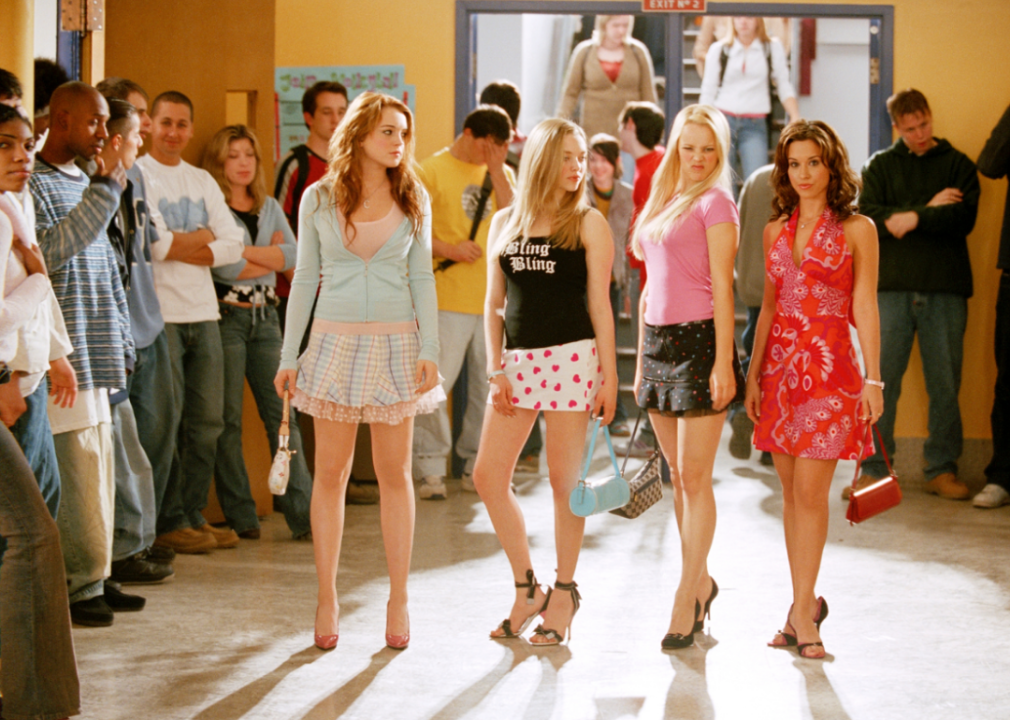 When “Mean Girls” came out, the mall was still a popular hangout spot for teenagers, thus the multiple scenes that take place at the mall in the film. In one scene, Regina (Rachel McAdams) takes the other Plastics to try on a dress for the upcoming Spring Fling.

While Regina is shocked to find out the size 5 dress won’t zip up, it comes as no surprise to Cady (Lindsay Lohan), who, as part of her plan to sabotage Regina, has been giving her Swedish nutrition bars that encourage weight gain—not weight loss like Regina thinks. When Karen (Amanda Seyfried) asks for the next size up, the salesperson snarkily tells the girls the store only carries sizes 1, 3, and 5 and delivers what has become a highly quotable joke burn: “You could try Sears.” 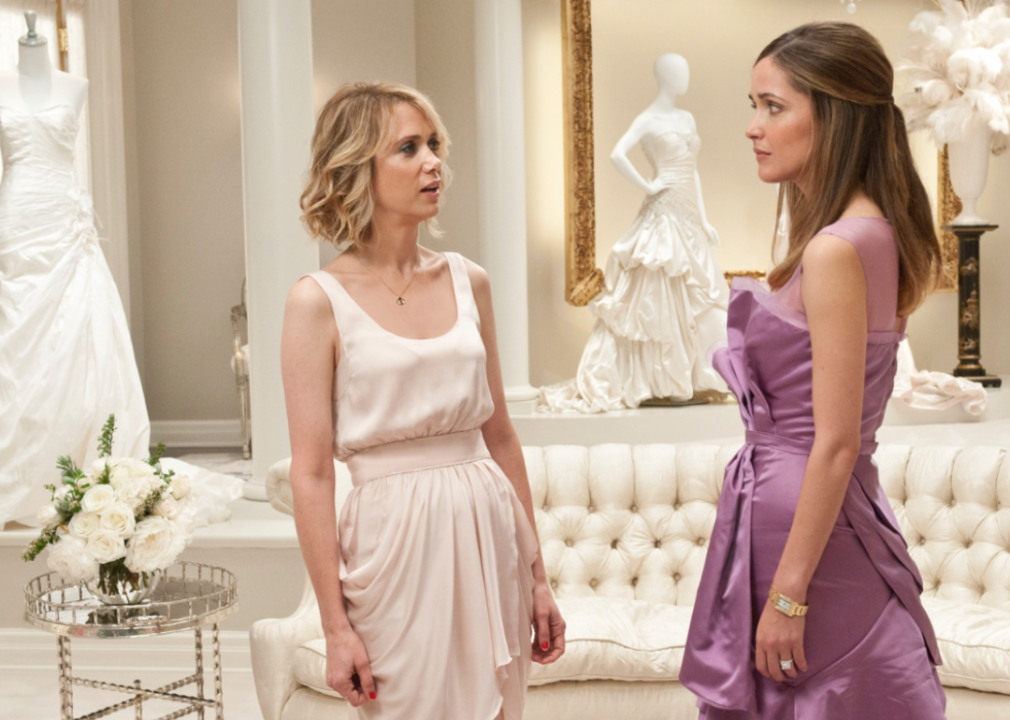 While “Bridesmaids” is full of outrageous moments, perhaps no scene is as iconically outrageous as the food poisoning disaster at a high-end bridal boutique. After Annie (Kristen Wiig) organizes a meal at a hole-in-the-wall Brazilian restaurant—which is implied to have a questionable health-code rating—Lillian (Maya Rudolph) and her bridal party arrive at the swanky Belle en Blanc to try on dresses. The first sign of what’s to come is a particularly boisterous belch by Megan (Melissa McCarthy).

A short time later, as each of the bridesmaids models the dress of their choosing and they debate over which dress to go with, more signs of gastrointestinal distress arise for everyone—or more specifically, everyone who ate the meat at lunch. Hilarity ensues as the bridesmaids (barring Helen, played by Rose Byrne) must share a single-person bathroom as they are violently ill. The over-the-top gross-out scene culminates in Lillian, who realizes there is simply no room for her in the restroom, running out the doors of the store and slowly squatting over a storm drain in the busy street—while still fully dressed in a luxurious, and expensive, bridal gown.

In an interview with Esquire, director Paul Feig revealed the infamous food poisoning element of the film wasn’t originally in the script.

This story originally appeared on Giving Assistant and was produced and distributed in partnership with Stacker Studio.