Beware of this Rogers texting scam involving a $60 credit A number of people have received text messages requesting they click a link to claim a false $60 credit.Thom Holmes on Unsplash

Beware of the Rogers scam.

On April 19, Rogers had a nationwide wireless outage that left millions without voice calls, texting and data service for several hours. Following this, they announced they will be offering a credit equivalent to Monday’s wireless service fee that will be applied to a future bill.

Since then multiple Rogers users have received text messages requesting people click a link to claim a $60 credit.

“Dear Customer, Due to the interruption of our service on Monday 19 April we have decided to give our customers a gift of 60 CAD. We are very sorry for all the inconvenience this breakdown might have caused," the message reads.

At the end of the message there is a link with “Claim here” written above it.

Nikita Kiceluk shared a screenshot of the message they received from “Rogers” and warned people not to fall for the scam.

“I got a text message Sunday morning claiming to be from Rogers (But they spelled Rogers with a zero not the letter O) so it tipped me off right away," Kiceluk told Castanet.

"They claimed by clicking the link I would receive $60 cash but that’s obviously not true and I worry our older community might not realize it's a scam so I wanted to share for everyone to be on the lookout."

Tessa Cooper also received the message. She posted a screenshot of it in the Vernon Rant and Rave (Uncensored) group on Facebook.

She told Castanet that she contacted Roger Communications Inc. about the scam and she was told they can’t do anything about it.

In the initial announcement, Rogers said the credit will be done automatically and no action is required by customers. 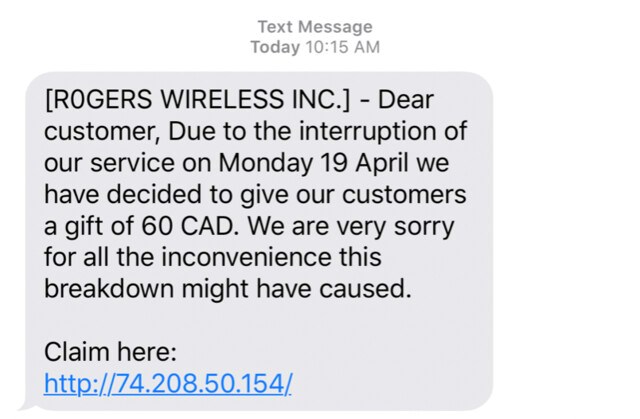 A screenshot of the scammer's message. Photo by: Nikita Kiceluk