B.C. dachshund breeder who had puppies seized says SPCA was out of line 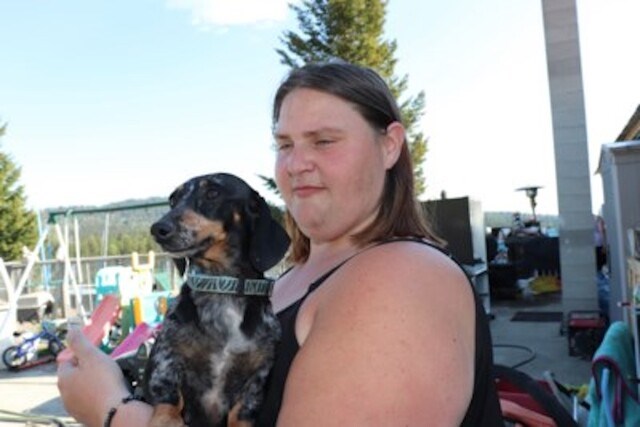 A Kamloops-area dachshund breeder is speaking out against the BC SPCA’s move to seize dozens of dogs from her property, saying she is devastated and "dumbfounded" by the decision.

Marisa Panter of Rainbow Dreams Dachshunds said she has been breeding dogs for 10 years.

She said statements from the SPCA stating her dogs were unsocialized and kept in filthy and substandard conditions are untrue.

“I’m very dumbfounded. These dogs are our family,” Panter said.

The BC SPCA said it took a total of 38 dogs — 10 adults and 28 puppies — from Panter's Heffley Creek property on Tuesday.

Panter said the SPCA had visited three times in two weeks and provided a list of conditions with which to comply, including “a 100-page book and a kennel code for a boarding facility, not for a breeder.”

She said instructions in the kennel code don’t make sense for a breeder of family pets.

“You can’t build something in 72 hours. ... I tried to comply with absolutely everything they said but in the end, because I couldn't build a barn in 72 hours, we lost it.”

The SPCA has said the dogs were living in cages and areas with excessive feces and levels of ammonia from urine — something Panter disputes.

“The dogs, you could hold them, they were not covered in pee. The dogs are crate trained, not to go to the bathroom in the house. There’s no feces throughout my house, expect for in a puppy pen, because you expect the puppies to poop,” she said.

“The runs are cleaned three to four times a day, the pens where the puppies were are cleaned every time we go in there, which is every couple of hours.”

She said the dogs have also had excellent vet care.

“The second day [the SPCA] got here, I called our vet out here to do a walkthrough of our house. And she was not concerned with any of the conditions of our house,” Panter said.

According to Panter, dozens of families who got their dogs from her are also confused by the SPCA’s actions.

Clara Malinsky, who has two dogs from Panter, said the dogs are happy and socialized.

Malinsky said she hasn’t heard anyone else say anything negative about the way Panter treats her dogs.

“They were clean, fed, healthy and happy both times I was in her house with my kids,” Malinsky said.

Many pet owners who have had contact with Panter have reached out to Castanet Kamloops in support of the breeder, saying their dogs are socialized and happy.

A social media post written by Panter about the seizure has also received dozens of comments in support of Rainbow Dreams.

“We are all hoping Marisa can get her beloved dogs returned to her,” one person told Castanet Kamloops in a written statement.

“My dog is healthy, friendly and came to us pretty much potty pad trained. When we took her to her first vet appointment they told me she was extremely healthy. ... The accusations that these dogs are neglected couldn’t be farther from the truth.”

Another person said their puppy was very well socialized around their two children.

“All her medical records, immunization and health checks were completed by a reputable vet in Kamloops… they attested to what great care these puppies had.”

However, one person told Castanet Kamloops that her puppy from Rainbow Dream had been born bow-legged, and “smelled like pee the day I bought her,” adding one other person who purchased from that puppy litter had the same experience.

Panter she said she is hoping to find a way to get the dogs back. She said she is looking into hiring a lawyer if she can come up with enough money.

“There are two sides to every story. I do understand that they have theirs, and I have mine,” Panter said.