Opinion: There's good reason to be wary of travelling on a plane during a pandemic 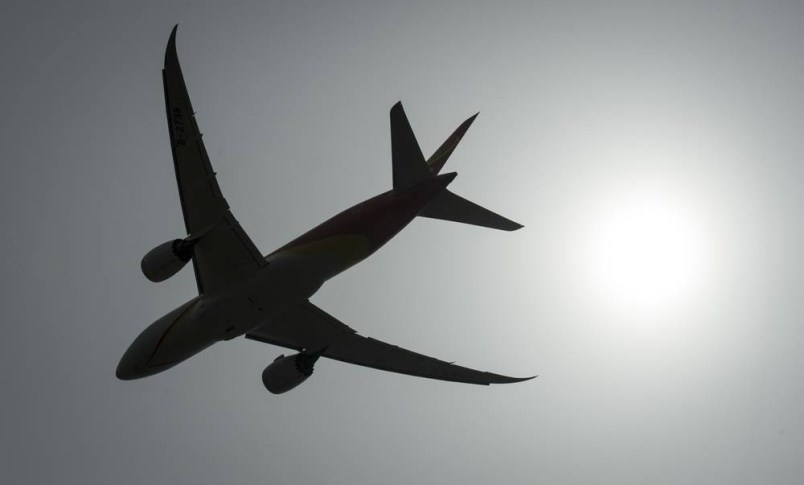 A plane is silhouetted as it takes off from Vancouver International Airport. Jonathan Hayward, The Canadian Press

A friend once had me doubled over with laughter by describing airplanes as “petri dishes with wings.” Another, risking her car on Victoria’s streets following a rare snowstorm, commented that taking to the road in such conditions was like driving “in a bucket full of idiots.”

Marry the two descriptions and you get an apt representation of airline travel during COVID-19.

On paper, it doesn’t look so bad.

For example, Air Canada’s website cites the “mandatory” use of masks for passengers over the age of two.

Once in the air, however, all bets — and many masks — are off.

For one thing, you can’t eat wearing a mask. And while Air Canada no longer sells food on its flights, passengers are allowed to bring their own. For some, an entire flight can be spent slowly consuming a single bag of potato chips, with no mask worn between takeoff and landing.

Then there are the surreptitious mask-removers.

A family member recently found himself obliged to fly from Ontario to Vancouver as part of his job. He spent hours researching planes to find those with the best cabin air quality (the 787 is a good one). What he couldn’t research were the other passengers.

Certainly, their temperatures had been taken, as required by Transport Canada at our country’s 15 busiest airports. The goal is to detect fever, a common COVID symptom.

Sadly, however, the 24 to 48 hours before symptoms develop are the most contagious. In fact, some people’s temperatures stay bang on normal the entire time they are shedding rivers of the virus. About 30 per cent of people who catch COVID are asymptomatic carriers.

Air Canada assures us that each passenger must complete a pre-flight screening questionnaire. The truthfulness of the answers, however, cannot be verified.

Partway through the flight, my family member saw the man seated across the aisle from him drape a coat over the seat-back in front of him. The man then stretched the coat back over his head, apparently requiring privacy to watch the in-flight movie.

About half an hour later, the flight attendant tapped the man on the shoulder. “Sir, you must wear your mask,” she told him.

How she’d known his face was bare is a great question, since his head was well hidden. Perhaps she had X-ray vision. Or maybe the man had left his mask in his lap. Or possibly the flight attendant had seen that particular dodge before.

Which brings me neatly back to the man’s questionnaire: If he was willing to flout the in-flight rules, was he likely to have revealed anything that would have prevented him from embarking?

Thanks to people like him, the risks of airline travel are higher than necessary.

In the first three months of 2021 alone, the Public Health Agency of Canada reported roughly 300 flights within Canada with confirmed COVID cases on board, and more than 100 international flights.

By the way, just because those flights have been identified doesn’t mean you will be contacted if you were on one of them. You must check, and recheck, the website that lists flights with a confirmed exposure.

Given that it can take up to 14 days for symptoms to develop, you could be checking for two weeks or even longer. By then, you could have infected heaven knows how many people if you haven’t self-isolated. Which is not required unless you’ve come from another country.

So how could these issues be addressed? Let’s take the film industry as a shining example.

These tests are not cheap — between $150 and $165 each. But as infectious-disease researcher Eric Brown says, in the context of all the economic costs of COVID, this might not be such a bad deal.

Perhaps, he says, it could even be the key to saving the economy as the pandemic continues, with no end in sight.

“I’m all in on this idea,” Brown told CBC. “I think it’s fantastic. I am mostly disappointed that it’s not available to all of us.”

Back to those petri dishes with wings that can have two different types of COVID purveyors on board. One is asymptomatic carriers who have no idea they carry the virus. The other: The folks who just wanna get where they wanna go, and don’t care who they hurt in the process.

They remind me of the student whose teacher asks him the difference between ignorance and apathy. His answer? “Don’t know, don’t care.”