Vancouver moves to protect most vulnerable from heat waves

Not every Vancouver neighbourhood enjoys the cooling effects of an urban forest. Now, the city has passed a motion to take action in protecting the city's most vulnerable people from a future heat wave.

The City of Vancouver has passed a motion to take action in protecting the city’s most vulnerable people from a future heat wave.

The motion, which passed unanimously at a council meeting Thursday, comes on the heels of a memorandum from Vancouver City Planning Commission urging city staff to open up a path to implement a series of short- and long-term measures over the next six months.

“This is something we have to do and do it fast,” said Coun. Jean Swanson. “We need to look at that weather report and go right into action ASAP.”

Across the province, sudden deaths spiked between June 25 and July 1 to 808 people — four times the previous five-year average for that same period.

How many and where people died in Vancouver is still not clear as the BC Coroners Service is still investigating the deaths.

Whatever the outcome of that investigation, the planning commission urged the city to take action to protect its most vulnerable residents, including older adults, racialized communities, people with disabilities and those living in and on the edge of homelessness.

“As I sat in front of a fan with a frozen tea towel around my shoulders, I thought of the folks in the SROs (single room occupancy) with the high, hot floors and no fan or freezer,” said Swanson. “It’s definitely a rich-poor issue.”

Deadly heat works beyond the confines of a poorly ventilated apartment. It’s well-documented that cityscapes of concrete and steel create a heat-island effect, driving up temperatures to dangerous levels during events like the recent heat dome. But not all neighbourhoods are affected equally. 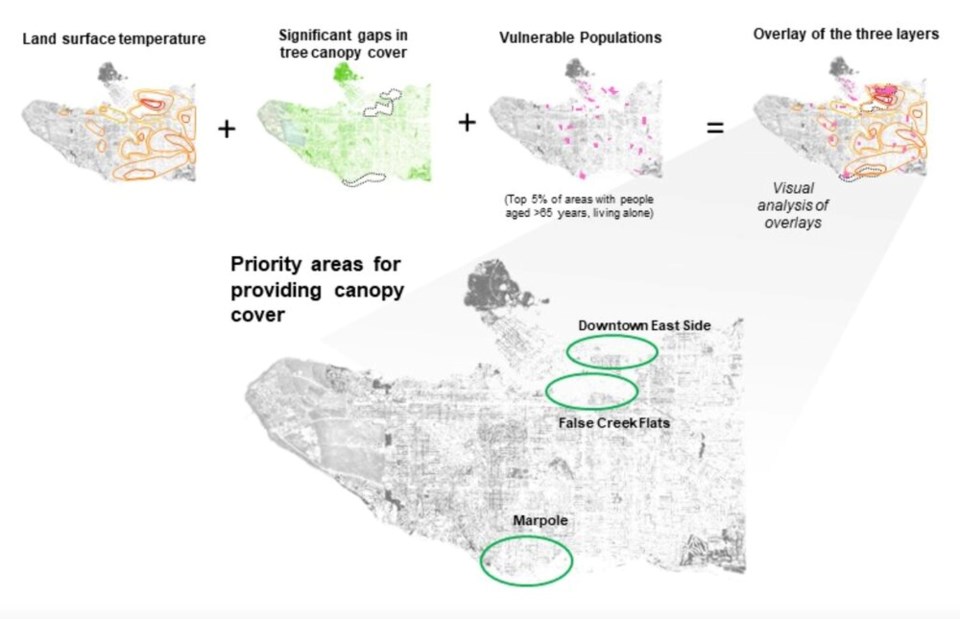 Many of Vancouver's neighbourhoods with the hottest temperatures also have the least tree cover, putting already vulnerable people at risk of heat illness and death. By City of Vancouver/SFU

Previous mapping by Simon Fraser University researchers and City of Vancouver staff has found areas of the city that suffer the highest temperatures on a normal summer day are the same ones that lack trees.

In neighbourhoods with dense tree cover, modelling suggests that a pedestrian standing directly under a tree canopy would experience temperature reductions of 15.5 to 17.3 C.

But in near-treeless neighbourhoods, that buffering effect disappears, leading to scorching temperatures in places like the Downtown Eastside, Strathcona and South Vancouver.

The memorandum from the planning commission calls on the city to close the tree canopy gap by:

The planning commission says creating a system of check-ins and supports for seniors and disabled residents would help prevent people from dying alone in sweltering apartments.

Emergency plans, noted the report, must be developed and disseminated in several languages to ensure diverse communities understand the risk and how to keep themselves safe.

The Vancouver City Planning Commission recommends establishing an inter-governmental team, including the City of Vancouver, Vancouver Coastal Health, BC Housing and community members to carry out the recommendations.

In a separate motion passed unanimously Thursday, Vancouver city council directed staff to report back on how it could support ambulance services across the city.

The motion calls on staff to come up with ideas on how to share new Vancouver Fire and Rescue facilities with the BC Ambulance Service.

Coun. Pete Fry, who introduced both motions, said it was not about downloading the province’s responsibilities to the city, but about “our values.”

“This is a critical infrastructure gap that is unfolding,” he said. “They’re not our employees like police and fire, but they are certainly our people, and I think we owe them a debt of gratitude for that.”

According to Ambulance Paramedics of BC president Troy Clifford, calls surged over 25 per cent during the heat wave, overwhelming an already strained system.

Ambulance paramedics tell Glacier Media of bodies piled in hospital corridors as under-staffing, delays in hospital hand-offs and surging casualties due to the heat wave mounted.

Some of Vancouver’s neighbourhoods most vulnerable to heat have been left with diminished ambulance services in recent years.

Paramedics from the only station serving the Downtown Eastside have been forced into double duty since a West End station shuttered. And residents of South Vancouver have been served by an ambulance station in Richmond since a station shut down at 57th and Cambie.

“The notion that South Vancouver is being served by Richmond freaks me out completely because that means they have to cross a bridge,” said Fry.

Supporting the motion, Coun. Adriane Carr noted the current city council has been faced with one crisis after another — from the opioid epidemic to COVID-19 and the heat wave.

“These kinds of crisis are only going to accelerate and become more frequent — especially the ones related to climate change,” she said.

“I really hope this motion can spur a rethink on how our services are distributed geographically.”

Stefan Labbé is a solutions journalist. That means he covers how people are responding to problems linked to climate change — from housing to energy and everything in between. Have a story idea? Get in touch. Email slabbe@glaciermedia.ca.