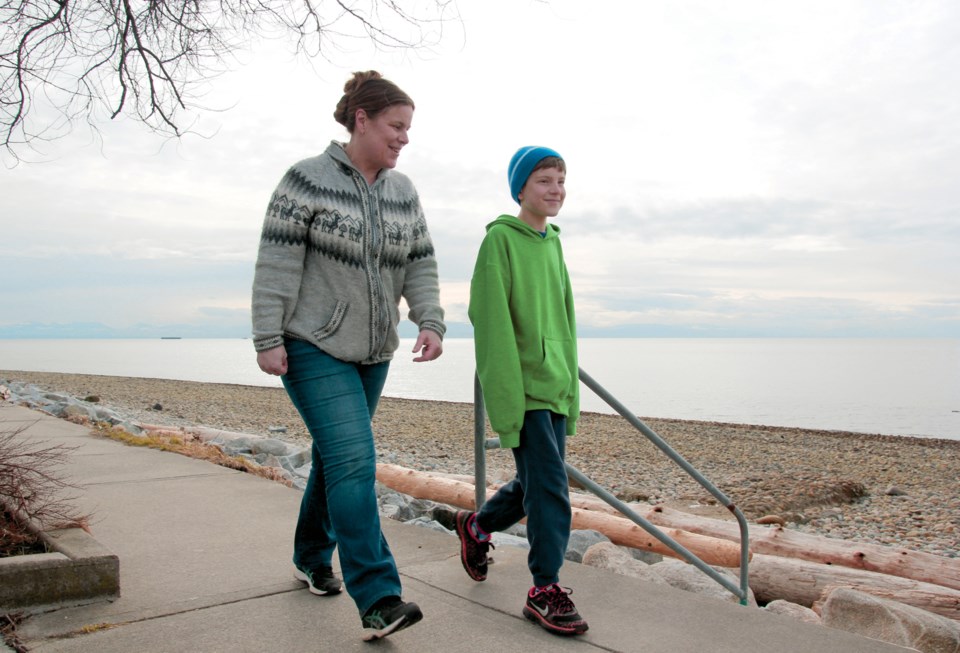 This month, Cody and Megan Keslo will walk 115 kilometres of the Sunshine Coast to raise funds to combat climate change. Keili Bartlett photo

The 10-year-old elementary school student plans to walk 115 kilometers – the distance between Gibsons and Powell River – and he plans to do it in a matter of days.

Mom Megan Kelso will be by his side as they walk along the highway, clocking a goal of 25 kilometres a day. They’ll start at St. Bart’s Church in Gibsons on March 14 and plan to reach the SPCA in Powell River on the 18th.

Megan suggested the idea of Climb for Climate Change to Cody, who is passionate about protecting the environment and has helped with other climate action fundraisers. Megan herself has always wanted to run a marathon, but injuries have prevented her from such a high-impact activity. Walking, although she’ll be sore, should be more manageable.

So far, the duo has raised $7,000 of their goal. The Kelsos hope to raise $30,000 for solar panels at the BC SPCA Sunshine Coast on the aptly named Solar Road, and for a donation to the BC Sustainable Energy Association. Cody is quick to point out that if everyone on the Sunshine Coast donated $1, they could easily reach their goal.

“If you don’t stop climate change, this world is going to die. So we have to stop it, because then we’ll be able to live and we’ll have a nice, clean, healthy world,” Cody said.

He said they chose to fundraise for solar panels to help the SPCA conserve energy and money. Part of Cody’s initiative to fight climate change is to help animals, which the SPCA takes an active role in.

The Kelsos will be receiving help along their journey from the Sunshine Coast Electric Vehicle Association and Climate Action Powell River. They’ve also received donations of food and shoes, and have been provided accommodations en route.

“Even if we all make a minor change, to be a little bit greener, it’ll help everybody out in the long run,” Megan said.

As for their 115-kilometre walk, they’ll accomplish it step by step.